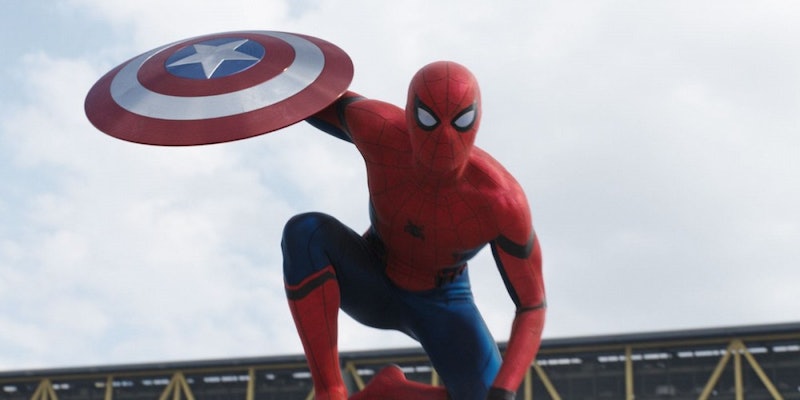 Captain America: Civil War features the biggest collection of superheroes ever seen in a Marvel Studios movie, or maybe any movie, for that matter. Four of the six original movie Avengers: Iron Man, Captain America, Hawkeye, and Black Widow; along with all of the new recruits: Scarlet Witch, Vision, Falcon, War Machine, and Ant-Man; plus newcomer Black Panther, all come together for an epic battle. However, one more newcomer stands above the rest: Spider-Man. But how does Spider-Man know the Avengers in Civil War ? He's never been seen in a Marvel Studios movie before, only Sony productions, so when and how do the heroes cross paths?

Well, the movie treats this meeting a lot differently than in the comics. In the original stories from the '60s, Spider-Man first meets the Avengers as a team (though he had previously met some of them individually) in Avengers #11, in 1964. This was about two years after Spidey's first appearance, and around a year after the Avengers formed as a team. In that story, the time-traveling villain Kang the Conqueror attempts to vanquish the Avengers using a Spider-Man robot, and he almost succeeds until the superhero team is rescued by, guess who? That's right, the real Spider-Man.

Much later, in the Civil War comic storyline from 2006, on which the movie is partially based, Spider-Man teams up with Iron Man initially, and Tony Stark makes Spidey a sophisticated new suit. However, when a clone of Thor that was created by Stark ends up killing a member of Team Cap, Spider-Man changes his mind about his place in the battle and defects to Captain America's side. So that's the history of the comics, but how does the movie differ? Spoilers to follow!

In the film, Iron Man, Captain America and their respective teams have already split into two opposing factions over the Sokovia Accords and, more notably, the fugitive status of Cap's friend Bucky. Stark is tasked with apprehending Cap and Bucky and bringing them to justice before the government steps in, but having fewer team members than Cap, he realizes that he'll need some help. That's when Stark heads to Queens, New York, to the house of high schooler Peter Parker. Stark shows Parker a YouTube video of a costumed teen swinging around the city, i.e. being Spider-Man (albeit in a very amateurish suit), and reveals that he's figured out that the mysterious hero is Parker.

The movie doesn't really explain how Stark comes to this conclusion, but since he's a billionaire genius with a lot of resources, it's not too much of a stretch. Stark then convinces Parker to help him apprehend Cap, and in exchange he won't tell Aunt May about Parker's secret identity. Parker agrees and ends up with a fancy new suit courtesy of Stark — a nod to the Civil War comic — and joins Team Stark in the big battle against Team Cap. However, unlike in the comic, Spidey's loyalty never wavers, and he remains on Team Iron Man throughout the battle.

So that's the history of Spider-Man and the Avengers. It's obviously handled a little differently in the movies, but hey, so is everything else. The moment when Tony Stark and Peter Parker meet in Civil War is incredibly joyous for fans, and is just one of the reasons why many are hailing the film as the greatest Marvel movie yet.