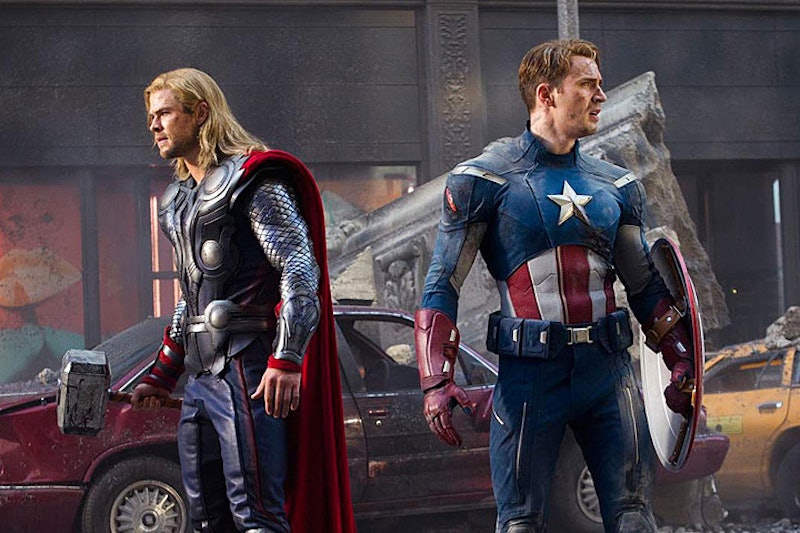 Captain America: Civil War features the biggest collection of superheroes ever gathered in a Marvel movie. There are more heroes than in The Avengers, and even more than were in last year's overstuffed Avengers: Age of Ultron. In addition to the obvious combatants, Captain America and Iron Man, the Avengers Hawkeye, Black Widow, Vision, War Machine, Falcon, and Scarlet Witch also play key roles, as does Cap's friend Winter Soldier, Ant-Man, and MCU newcomers Spider-Man and Black Panther. Like I said, there are a ton of heroes in this movie, but one glaring omission is the God of Thunder. So why isn't Thor in Civil War ? Minor spoilers ahead!

Thor's absence is briefly addressed in the movie, but it is never explained. During the initial meeting about the Sokovia Accords, while trying to convince the Avengers to sign the agreement granting the U.N. jurisdiction over their actions, Secretary Ross asks the group if they even know where Thor and Hulk (who's also missing) are. None of them do. Ross then uses this as evidence that the Avengers aren't responsible enough to continue going unchecked, comparing the two missing superhumans to unaccounted-for nuclear bombs. But even if no one in the film knows where Thor is, fans should have a pretty good idea.

The last time fans saw Thor on screen was in last year's Avengers: Age of Ultron . But unlike in the first Avengers, the son of Odin spent much of the film away from his teammates, teaming with Dr. Erik Selvig to investigate a vision he has. He learns about the Infinity Stones along the way, and at the end of the film he returns to Asgard to continue unraveling whatever is going on at the cosmic level. In other words, Thor has much bigger fish to fry than the very Earthly (and small by comparison) squabble at the center of Civil War .

It's also quite likely that Thor encountered a crisis in Asgard once he arrived there; one that had nothing to do with the Infinity Stones. In his last solo outing, 2013's Thor: The Dark World, Loki covertly takes over Asgard by impersonating Odin at the end of the film. Thor is unaware of this, and it's likely that the God of Mischief's reign hasn't exactly been one of peace and prosperity. Couple this with the fact that next year Thor is starring in a movie named after the Norse end of the world myth, Thor: Ragnarok , and it adds up to things not sounding so great in Thor's homeland.

So yes, Thor isn't in Captain America: Civil War, but it's because he's trying to prevent catastrophe in Asgard while also attempting to gather information about the universal threat posed by Thanos and the Infinity Stones. So the guy's got a pretty full plate, and doesn't really have time to worry about the political disagreements of mere mortals.