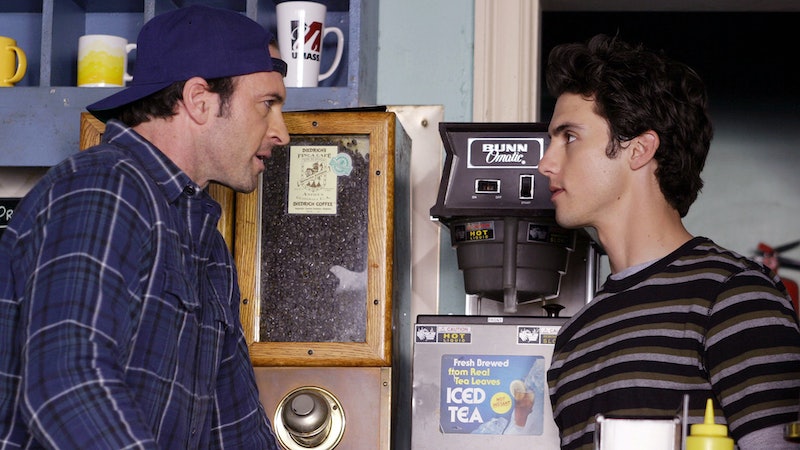 Ask any Gilmore Girls fan what they love most about the show, and the response will probably be Rory and Lorelai's pop culture-filled banter, or the coffee-driven romance between Lorelai and Luke, or even the constant sight of Kirk popping up as Stars Hollow's newest mailman/jewelry seller/independent filmmaker. But for Milo Ventimiglia, who plays Jess Mariano in the series and its upcoming revival, the best part about Gilmore Girls is something entirely different.

"It's a lot of the quick banter with Scott Patterson," Ventimiglia says, speaking to Bustle at the Tribeca Film Festival. "He’s always a lot of fun to just kind of goof off with."

The actor's referring, of course, to the actor who plays Luke, Jess' grumpy, diner-owning, Lorelai-loving uncle. From Ventimiglia's comment, it appears that Luke and Jess are back to messing around with each other in the revival, and although the star won't reveal the state of the duo's relationship, he does hint that it's "not quite as turbulent as it had been in the past."

Perhaps Jess has returned to Stars Hollow an accomplished author, with a maturity he didn't possess back in the original Gilmore Girls episodes and a newfound respect for his uncle. Or maybe, Jess and Luke have simply grown to understand in each other in ways they didn't during the show's original run, and now are on somewhat solid ground. Whatever the case is, Ventimiglia's comments seem to suggest that there won't be any of the massive fights between Luke and Jess that happened so often during the teen's time in Stars Hollow, which can only be a relief to fans; although the arguments were certainly entertaining at times, seeing Luke and Jess come to blows so often caused some pain for viewers invested in the characters' happiness.

Thankfully, the Gilmore revival already seems to be full of thrilling moments, from Rory going back to Chilton to Lorelai bonding with Luke, and Ventimiglia, for one, seems full of excitement about the new episodes. Says the actor, "To be reunited with this cast, it’s a blast. We all had so much fun back on the show." Hopefully, the upcoming revival will prove just as exciting for fans as for its actors.