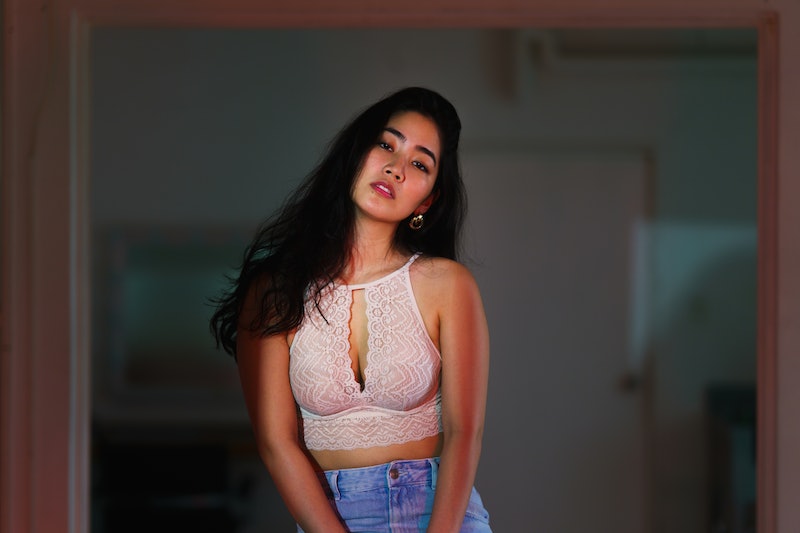 Perhaps especially if you're a woman who primarily dates men, you've been warned against being "too forward" in your dating life. People tend to have lots of negative misconceptions about forward women, even if by "forward" we're just talking about asking the guy out first, or making the first move. Society would have us believe that women who don't wait for men to ask them what they want are emasculating them — yet women who don't speak their mind are labeled timid or even passive aggressive. It's a ridiculous setup, and I don't think I'm the only woman who is 100 percent done with it.

Even if you don't enjoy being forward, or you do enjoy it but you've never been discouraged from being too forward with men, you're probably still aware of some of the things people get wrong about forward women. Thanks to our patriarchal society's way of policing female sexuality, and the fact that gender roles are still such a big deal, women who make the first move are often labeled as desperate, impatient, overbearing, and promiscuous — all because we choose to be direct with the men we're interested in.

Of course, I'm not saying women who primarily date women get to avoid these stereotypes either, because female sexuality is heavily policed regardless of your sexual orientation. That said, I can tell you from experience that when a woman chooses to be forward with men, people like to assume a particular set of things about her.

1. That We're All Super Confident & Outgoing

I understand why people assume forward women are super confident and naturally outgoing, but in many cases, this couldn't be further from the truth. Personally, I think I'm a pretty forward woman — but I'm also really insecure sometimes.

If I meet a guy who seems interesting and attractive, I typically ask him for a date before he asks me — but I'm usually nervous as hell about it. And when I ask the men I'm seeing if they would be down to bang instead of waiting for them to bring it up on their own, it's not because I'm sure they'll say yes. It's because I know that I want to have sex with them, and I'd rather come right out and say it than wait around for their awkward attempts to get it in. I also bring up sex first because I value both giving and attaining affirmative consent, and there's really no way to do that without being forward.

I'm sure some forward women ooze confidence and extroversion and have zero fear of rejection. In my experience, though, knowing what you want doesn't mean you're not at least a little bit afraid to ask for it.

2. That We're Desperate For Attention

If you're a woman who's forward with men, you've probably been called desperate or clingy at some point. This makes literally no sense at all to me, because women who don't wait to be pursued are just doing the exact same thing that men are encouraged to do from boyhood. It's also incredibly ridiculous to assume that forward women are desperate for attention. For me personally, making the first move is largely about ensuring my time isn't wasted.

Part of the reason I choose to be a forward woman is because I'm very selective about who I spend my free time with. If a guy seems interesting and attractive enough for me to risk rejection to ask him out, then I figure I probably won't regret going on a date with him.

3. That We Always Need To Make The First Move

For me, this couldn't be further from the truth. Do I like making the first move? Clearly I do. Do I prefer it, though? Not really. Don't get me wrong, it can feel super empowering to pursue a man I'm attracted to, and I definitely prefer being direct with a dude instead of allowing my time to be spent on his indecision or insecurity. But this doesn't mean I don't like it when a guy I'm into asks me out.

I relish meeting men who are confident and respectful enough to approach me in a non-threatening way before I can manage to gather enough courage to approach them myself. Yes, forward women may enjoy making the first move sometimes — but we're also pleasantly surprised when we don't have to.

First of all, everyone knows that "bossy" is just a negative word people use to describe confident women who can lead. Aside from that, though, there are so many other things wrong with this assumption.

Just because some women like to make the first move doesn't mean we're pushy people. Actually, part of the reason I like being so upfront with men about what I want is so they'll feel free to be equally upfront with me about what they want. Forward women, in general, aren't controlling or domineering. We just like to play an active and honest role in our dating and sex lives.

5. That We Have Lots Of Sexual Partners

This may be true for some forward women, and if it is, that's perfectly OK. Being sexually active is normal and healthy, and in my opinion, your sex number doesn't matter. However, there's something very unsettling about the fact that women can't be forward without people assuming they're down to date or sleep with any man who will have them.

Just because a woman has the gumption to frequently make the first move in her dating life doesn't mean she's constantly pursuing men, and it definitely doesn't mean she would date or sleep with someone she wasn't really into. Even if it did mean that, though, it really shouldn't be that big of a deal — because men are praised for doing the exact same thing, all the time.