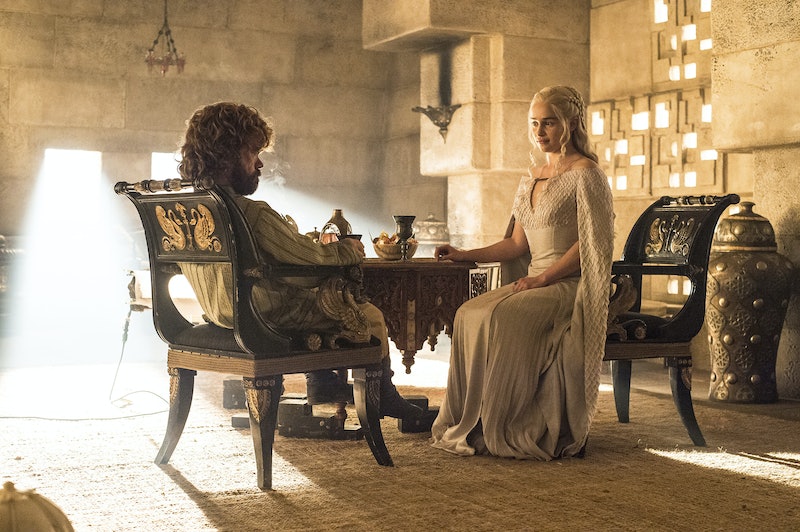 Like Varys, I have felt for a longtime that Daenerys Targaryen was the magical key to bringing peace to Westeros on Game of Thrones. With theories existing that Jon Snow and Tyrion Lannister may be Targaryens on Game of Thrones, there could be an ultimate power trifecta of Jon, Tyrion, and Daenerys that fills my Game of Thrones-loving heart with pure joy. However, there is one unfortunate side effect to all of these rumors about secret Targaryens: The Targaryen order of succession to the Iron Throne would change, making the natural-born leader Daenerys third in line to the throne. As much as I love Jon and Tyrion, the idea of the merciful Breaker of Chains and the powerful Mother of Dragons not getting her rightful shot at ruling the kingdom of Game of Thrones is more than disappointing.

I jumped on the R+L=J theory bandwagon pretty much from the moment I heard the reasoning behind it and though I was less sure of the Tyrion Targaryen theory, Season 6 of Game of Thrones certainly seems to be leading fans in that direction. For those unfamiliar with how these two favorite characters on Game of Thrones could be Targaryens and related to Daenerys, here is the scoop.

According to the R+L=J theory, Jon Snow is not the bastard of Ned Stark. Instead, he is the son of Dany's brother Rhaegar Targaryen and Ned Stark's sister Lyanna Stark. Rhaegar abducted Lyanna, who was betrothed to Robert Baratheon, which led to Robert's Rebellion where Robert killed Rhaeger and took the throne from Rhaegar and Dany's father — the Mad King Aerys Targaryen. This theory suggests that Ned protected Jon by saying he was his son and with Bran going through his family's history and seeing his Aunt Lyanna in Season 6, this theory is gaining even more traction. It also would make Jon Snow the nephew of Daenerys Targaryen.

The theory behind Tyrion being a Targaryen is that Tywin is not actually his father, but that the Mad King Aerys impregnated his mother Joanna Lannister. Not only is this theory encouraged by the fact that Tywin never respected his son, but Season 6 of Game of Thrones is also making fans believe in its legitimacy since Tyrion successfully unchained two of Daenerys' dragons in the episode "Home." If this theory proves to be true, then Tyrion Lannister would be the half brother of Daenerys Targaryen.

Not only would it be exciting that Dany would have a surprise nephew in Jon and a surprise half brother in Tyrion, the trio of Dany, Jon, and Tyrion is the assemblage of the best characters on the show. The thought of this awesome family taking over the Iron Throne or all riding dragons (based on another fan theory — "The Dragon Has Three Heads") is truly thrilling and where I'd love to see the story going. Yet, I recognize the drawback to Dany, Tyrion, and Jon all riding off into the sunset on dragons since if the two men are actually Targaryens, Dany's claim to the throne changes based on the traditional order of succession.

Daenerys is a queen, there's not doubt about that. But blood relations to Tyrion and Jon would no longer make her first in line, at least according to the Targaryen claim to the throne. If the small council — or whomever would decide on who is the rightful heir to the Iron Throne — did not let the issue of both Tyrion and Jon being bastards negate their claims, both men would be in front of Dany. Since Jon would be the son of the Mad King's oldest child Rhaegar, he would be first in the line of succession. And with Tyrion being the younger brother of Rhaegar, he would come after Jon — or after any children Jon may have. Daenerys, as the youngest child of the Mad King and a woman, would come after Tyrion. For a British royal line of succession comparison, it would be like Jon Snow is Prince William, Tyrion is Prince Andrew, and Daenerys is Princess Anne.

I should note that this theory is dependent on the people of Westeros accepting the Targaryen family as the rightful rulers. But considering the Lannister children keep dying and the Baratheon brothers are dead, the Targaryen family has a lot less competition. So if Jon really has an Uncle Tyrion and an Aunt Daenerys, he could potentially be the one to take the Iron Throne and call the shots in King's Landing. And as much as I adore Jon Snow and know he would be a worthy leader, I really want to see King's Landing take on the name Queen's Landing with Daenerys on the throne.

Yet, since I love these two Taragaryen theories so much, I naively have faith that there's a way it could go down without pushing Daenerys off of the throne. Considering Daenerys, Tryion, and Jon are the three strongest and levelheaded leaders in all of the known Game of Thrones world, I'd hope the three could rule amicably and not become power hungry. I realize this is extremely too hopeful of a narrative for Game of Thrones, but if any three people had a chance of being able to work together in Westeros, wouldn't it be Tyrion, Daenerys, and Jon? I'm not saying there wouldn't be egos flying — especially with Daenerys, who is the most power hungry of all three characters — but they all excel at doing what's called of them when in positions of power.

Not to mention, they all would respect one another, While Jon and Dany have not had any interactions, Tyrion has met both of them. Tyrion has massive respect for Daenerys and Jon and Tyrion bonded all the way back in the very first episodes of the series.

Besides Dany losing her strong claim to the throne, having Tyrion, Dany, and Jon all related would tie up the Game of Thrones series and A Song of Ice and Fire series almost too neatly. With all of the death and the deceit in Game of Thrones, no story line from George R.R. Martin has ever been this tidy. But perhaps the HBO series will pull a J.K. Rowling by giving fans a well-planned and hopeful ending. Yet, before I get ahead of myself, maybe I should heed Ygritte's words to Jon Snow and remind myself that I most likely know nothing.