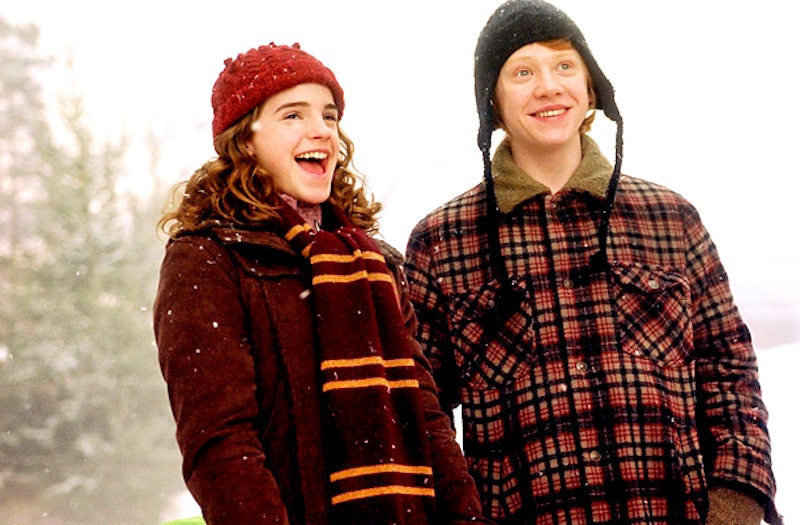 There were literally hundreds of characters in the Harry Potter books, many of which also made it into the movie adaptations. With that many wizards and witches in one place, it's only natural that some romantic relationships would pop up. In fact, the relationships in Harry Potter made for some of the most fun, lighthearted moments in the series. In between all of the mortal danger and discussions of good vs. evil, there was Lavender Brown calling Ron "Won-Won," Harry being the most awkward person ever around Cho Chang, and Hermione trying to dodge Cormac Mclaggen's advances at the Slug Club Christmas party. But there were also some relationships with more significance, such as Lily and James Potter's marriage and Ron and Hermione's long-awaited union.

Among all of these HP relationships, I'm guessing that you had a favorite. Did you cry at Bill and Fleur's wedding? Were you glued to the screen when Ginny and Harry kissed in the Room of Requirement? Given the sheer number of couples there were to choose from, whatever your favorite Harry Potter relationship is, it totally says something about you. But before you dish out a couple hundred dollars for a round of formal psychoanalysis, here's a look at what your favorite HP relationship says about your personality and approach to romance.

You're passionate about the causes you believe in, and you want a partner who is the same. Your ideal relationship is one of companionship as opposed to just fairytale courtship. However, you do appreciate some traditional romance, and you might someday want to start a family of your own. Also, you cried when you saw Remus and Tonks' dead bodies laid out, nearly holding hands.

You just wanted the nice, handsome guy and the nice, pretty girl to end up together. You love traditional romance, and were heartbroken when Cedric died, abolishing the possibility of a happy ending for the couple. Also, you have strong feelings for Robert Pattinson, and would have preferred that he stayed in the world of Harry Potter as opposed to venturing off into Twilight land. Consequently, you are likely not a fan of Kristen Stewart.

You're a fan of unlikely pairings that turn out to be amazing, like watermelon and feta or interspecies friendships. You also like to root for the underdog, and you acknowledge that Hagrid was one of the best characters in Harry Potter and totally deserved love.

You value family above all else, and your bonds with the people you love are more important to you than superficial things. You believe that good will always triumph over evil, and that you should always do the right thing even when the wrong thing would be easier. You also take joy in the little things in life and appreciate quirkiness in yourself and others.

You're a big enough HP fan to know that Dumbledore had a crush on Grindelwald, a fact that was revealed by J.K. Rowling in the same interview where she explained that Dumbledore was gay. You're an inquisitive person and wish you knew more about the background of Dumbledore, who was easily one of the most intriguing characters in the series. Also, you would have loved to see an onscreen romance between young Dumbledore and Jamie Campbell Bower. I do not blame you.

You're deeply moved by stories of love and loss. You might put on a mask to hide your vulnerabilities, but secretly, when you fall for somebody, you fall hard. And you would do anything for the people you love, even if it's at the cost of your own feelings.

You think that the best things in life are the ones that you work hardest for and that build over time. You are patient and are willing to wait for things to come to fruition as opposed to rushing into every endeavor. You watched knowingly as Ron and Hermione bickered for the first six and a half years at Hogwarts, and then you let out a giant sigh of relief when they finally kissed. You are in denial about the fact that J.K. Rowling later said Hermione should have married Harry.

You appreciate things that are subtle and understated as opposed to things that are in-your-face. You would rather savor a good vanilla ice cream cone than build a froyo creation covered in toppings. You appreciate the fact that Harry's last love interest was a sidenote to the story as opposed to the main focus, because the Battle of Hogwarts was more important to you than who the protagonist was kissing.

Taking a closer look at your favorite HP couple can reveal a lot about how you view romance and life. Just as so many other aspects of the series, the relationships in Harry Potter have significance that extends past the borders of the screen.