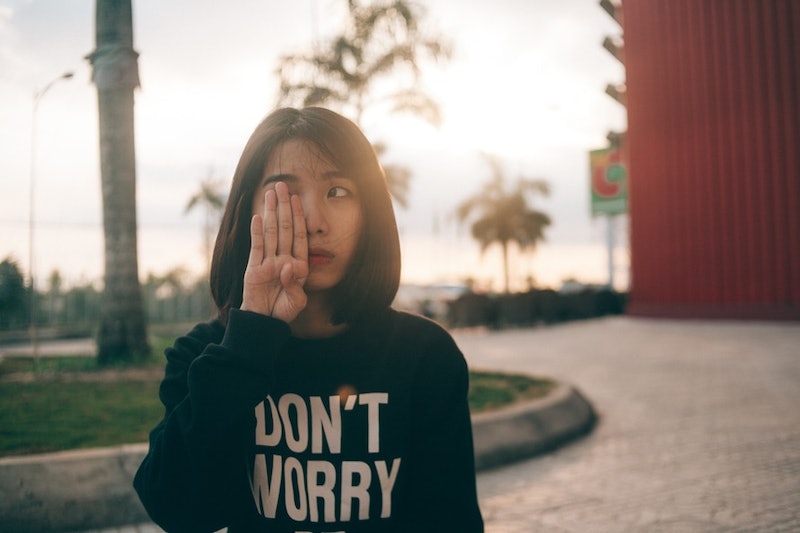 The world is a scary, stressful place, so it's totally normal to feel yourself worrying about seemingly everything. But too much worry can quickly get out of hand if you let it. That's why you should keep in mind the things not worth worrying about, so you can live a life that's as stress-free as possible.

Because, as it turns out, most things are not worth worrying about. If you don't agree, then think back to stressful/embarrassing/awful times in your past, when something felt life-alteringly terrible. Maybe you were in college, and that one paper felt like it would be your undoing. Or maybe you messed something up at work, and thought "That's it, I'm so fired." But look, you survived! That paper is now a distant memory, and I promise your coworkers don't lie awake thinking about your errors. In short — most things are not worth the stress

Of course I know being 100 percent carefree is way easier said than done. As a life-long worrier myself, I can tell you that most things shouldn't keep you up at night. But if they do, it might be a good idea to reach out to a mental health professional for a little support. With that in mind, here are a few of the things you should stop focusing on and worrying about, if you want to be less stressed.

1. What People Think Of You

Ever walk into a crowded room and feel like all eyes are on you? This is called the "spotlight effect," and it really sucks (especially if you're shy or have anxiety.) It's really helpful to keep in mind that people don't notice you as much as you think. This was shown in a study where a student went into a room of their peers wearing an "embarrassing" Barry Manilow T-shirt. The student was convinced the shirt would attract attention, but follow up questions revealed that less than 50 percent of the group remembered the shirt, explained Megan Rooney on Psychology Today. "Since we're focused on ourselves, we assume that others pay close attention to us, too, but everyone else is concerned with their own problems," Rooney said. So the next time you feel shy in public, keep Barry in mind.

2. Those "Things To Do Before X" Lists

OK, this one is way easier said than done. But think about it — you can't slow down time, so why stress about getting older? Besides, studies have shown that people are actually happier as they age, according to Royale Scuderi on Lifehack.org. So stop freaking out about your age and birthdays and wrinkles, and start enjoying life.

I don't know about you, but "eight glasses a day" is always ringing in my ears. I'm constantly stressing about whether I'm hydrated, and how I can possibly drink that much water. Sound familiar? Then here's some good news — you don't have to have that much water. The idea started back in 1945 when the U.S. Food and Nutrition Board told people to drink eight glasses of water a day. "Before long, most of us believed we needed eight glasses of water, in addition to what we eat and drink, every day," said Dorothy Foltz-Gray on Health. In reality, you get liquids from coffee, juice, milk, fruits, and veggies. Add water in for good measure, and you should be plenty hydrated.

5. How Much You Weigh

Again, this is sometimes way easier said than done. The main thing to keep in mind, however, is your health, and how you feel. As Scuderi said, "Care about healthier food choices, care about how strong you are, how much exercise you’re getting, just stop attaching your value, your success, your confidence, your attractiveness, and your health to this one single number." I couldn't agree more.

Paying rent on time can be super stressful. Maybe you don't have the money, or you were busy and forgot to drop off the check. Either way, tell yourself it is OK, because usually it is. As Kelly Fitzpatrick said on Greatist.com, "... most landlords include a few day grace period where rent is not considered late (and subject to those pesky fees!). Refer to your lease to determine your landlord's specific policy on a grace period and late fees."

While embarrassing as hell, drunk texts don't have to be as life-ruining as they seem. Usually all they require is a little cleanup. As Fitzpatrick said, "... if the messages are simply embarrassing but otherwise inoffensive, send something along the lines of: "Sorry about those texts, had a bit too much to drink!" If the texts were potentially upsetting, though, pick up the phone. Calmly apologize ... and try to make it up to them — getting to see you miserably hungover at brunch should do the trick."

8. Being Inundated With Germs

If you have serious issues with germs, then I don't expect you to magically cast your worries aside. Again, don't feel ashamed if you need to seek professional help (because germ phobias are real!). As for the rest of us, it's often helpful to be reminded that germs are totally normal. As Mary Roach said in The New York Times, "Bacteria are unavoidably, inevitably — and, usually, utterly benignly — a part of our world." Germs are everywhere, so learn to live with them. And remember you have an immune system, so don't worry too much about that door knob, or your chip falling on the ground. More than likely, you'll be just fine.

9. Your Favorite Lipstick Being Dangerous

While there are a ton of products out there with less-than-great ingredients, usually lipstick isn't one of them — at least when it comes to scary lead. As Foltz-Gray said, "In 2007, an environmentalist group, the Campaign for Safe Cosmetics, had 33 lipsticks tested for lead. Although there’s no lead limit for lipstick, one-third of the tubes had more than the limit allowed for candy." Go ahead and keep smearing on your favorite color with confidence.

Do you feel insanely guilty when taking a vacation, much less one day off? Well, stop it now. Not only do you need a vacation to do your best at work, but you deserve that time off. So go ahead and book yourself some "sick" days. According to Fitzpatrick, the best way to use your time off is to schedule a day off here and there whenever you think it might be needed (like after a big presentation). Then set up your out-of-office message, unplug, and enjoy it.

Acne can sort of feel like a Barry Manilow T-shirt for the face. It is not only uncomfortable and painful, but oftentimes downright embarrassing. The thing to keep in mind, however, is that most people don't get a crap about your skin, nor is it as life-damaging as it seems. As Katherine Morales said on XoJane.com, "[Acne is] embarrassing at times, maddening even, but I can think of about a hundred million things that could be worse." The point is, keep some perspective, and enjoy your day — acne and all.

I personally enjoy ruminating on all the things I've done wrong in life, from that embarrassing thing I said in second grade, to the time I forgot my lines in a play I wrote. (Bad, I know, but I was nervous.) Whether it's something small and insignificant, like second grade, or something huge, like a divorce, you have to stop stressing about the past. Instead, focus on living in the moment.

13. Not Going Out Tonight

FOMO is a real thing, and it can totally sabotage your plans for a relaxing evening at home. But it really is simple — if you don't want to go out, then don't go out. Turn off your notifications, stay off of Facebook, and feel OK with your decision to have some time to yourself. I promise, it'll be totally fine.

Money issues suck, no doubt about it. But aside from working and saving as much as possible, there's not much you can magically do today to make things better. Your stockpile of dough will get bigger someday, if you work at it. Until then, try not to stress.

I know, it sometimes feels like life is this easily controlled thing. In reality, though, it's not. People will talk behind your back, you'll get sick, you won't get the job — it's all a part of life, so learn to relax. As Scuderi said, "If there’s nothing you can do to impact the person or the situation, then don’t waste your energy." Learn to go with the flow, and recognize when things can, and cannot, be helped.