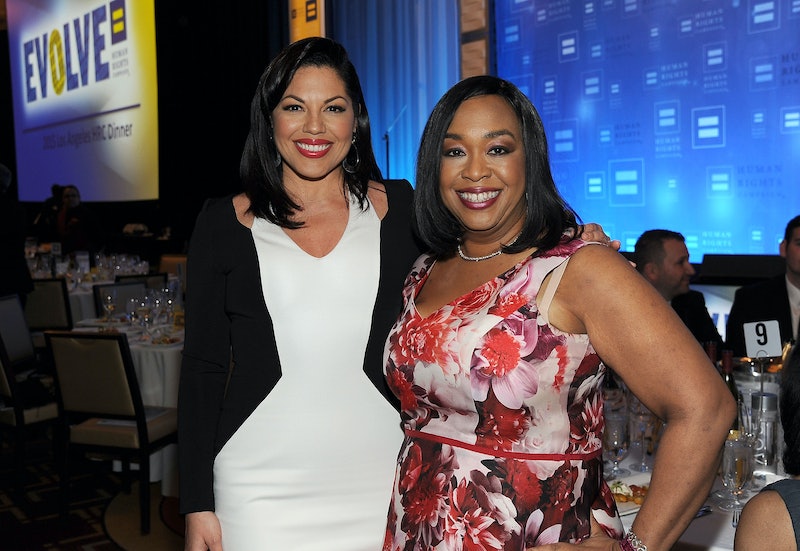 For over a decade, the Grey's Anatomy cast has provided one of the most diverse ensembles on broadcast television. Showrunner Shonda Rhimes has made sure to fill her cast not just with the handsome middle-aged white doctors people expect on their medical soaps (thanks, George Clooney), but also people of all genders, races, and sexualities. That's what has made the ABC drama one of the most progressive shows on TV — which makes it all the more impressive that Callie is the most progressive character on Grey's Anatomy , given how many contenders she's competing against for that title.

As portrayed by Tony-winning stage actress Sara Ramirez, Dr. Calliope Torres is a bisexual Latina orthopedic surgeon; certainly not a character description you hear every day. And although fans had to bid Callie a sad farewell in the Season 12 finale (Ramirez announced after it aired that she was "taking some welcome time off" from the long-running show) her fans will certainly never forget her — or the tremendous impact she made on Grey Sloan Memorial Hospital.

Here, in chronological order, are 13 times that Callie Torres proved she was one of the most dynamic, complex, and progressive characters on all of television:

1. When She Danced In Her Underwear

Although we first met Callie in Season 2, her character was largely wrapped up in her awkward relationship with George O'Malley; it wasn't until Ramirez's first full season as a series regular that the character really came into her own. Perhaps the first time time viewers realized Callie wasn't just that weird surgeon who liked broken bones was when Richard Webber walked in on her dancing in her underwear — in the hospital basement, where she had been living despite being the heiress to a massive hotel fortune — and her status as a body image positive woman with hidden depths was cemented.

2. When She Kissed Erica Hahn

Callie didn't arrive on the show with her sexuality fully formed; in fact, it took her until the end of the fourth season to realize that she was attracted to women. After Dr. Hahn teasingly kissed her in an elevator to provoke Mark Sloan, the two drinking buddies soon realized they had actual feelings for each other. Callie kissed Erica for real in the Season 4 finale, and the couple embarked on an official relationship in Season 5.

3. When She Slept With Mark

Erica proudly proclaimed that her relationship with Callie made her realize she was a lesbian… but Callie didn't share her girlfriend's black-and-white views on sexuality. While cheating on Erica with Mark probably wasn't the most admirable way to go about it, it was refreshing to see a character explore the fluidity of her sexuality and accept that it was possible to enjoy sex with both men and women.

4. When She Quit Her Job

Of course, Callie's sexuality wasn't the only thing that made her a progressive character; she was also career-driven and damn good at her job. When Richard passed her up for a promotion, she didn't take it lying down. "I am excellent!" she said proudly to the chief before quitting her job and taking her talents to Mercy West. (Of course, that hospital's merger with Seattle Grace eventually meant that Callie ended up right back where she started.)

5. When She Stood Up To Her Father

Callie's religious father didn't take too kindly to the news that his daughter had started dating women. Callie was very close to her dad, but despite the pain that their estrangement caused, she didn't back down when he brought a priest to the hospital with him to try to "help" her with her sexuality. "You can't pray away the gay!" she shouted at him in the waiting room. Amen.

6. When She And Arizona Compromised

The budding relationship between Callie and Arizona Robbins was brought to a screeching halt when the former was shocked to learn that the latter — a pediatric surgeon, no less — didn't want kids. However, after the traumatic events of the hospital shooting, the couple reconciled. Realizing how precious life is, they both approached the other about compromising: Callie offered to let go of her dream of having kids, but Arizona told her they'd have "all kinds of kids."

7. When She Survived A Car Crash

When Callie was thrown through the windshield in a tragic car accident, she had to fight not only for her own life, but for the life of the unborn baby inside of her. Eventually, the doctors were forced to deliver Sofia prematurely, but both she and her mother eventually pulled through — and Ramirez got to show off her impressive vocal talents while doing it.

8. When She And Arizona Got Married

Four years before Obergefell v. Hodges made it an inalienable right, gay marriage was still a privilege only available to couples in a certain number of states — so seeing two women get hitched in an unabashedly romantic wedding on broadcast television was, if not groundbreaking, then at least still something of a novelty back in 2011.

9. When She Made A Tough Decision

One of the reasons people fought so long and hard for marriage equality as so gay couples could legally make medical decisions for their spouses; and that's exactly what Callie had to do after Arizona was severely injured in a plane crash. Despite the fact that Arizona made her promise not to amputate her leg, Callie was forced to make a tough call when her wife was coding in the OR… and she told Alex to cut it off.

10. When She Helped Arizona Heal

Arizona's road to recovery was a long and hard one — but the show made sure to highlight how difficult such a recovery is not just for the patient, but also for their loved ones. They didn't always both handle it well (like that agonizing fight in the shower), but overall Callie was very patient with her wife's needs, and helped Arizona become comfortable enough in her own body again that she was finally ready to have sex for the first time since the plane crash.

11. When She And Arizona Broke Up

"Calzona" went through a rough patch after Arizona cheated on Callie, but the couple was determined to make things work. They went to couples therapy together, and soon embarked on a mandated 30-day break. By the end of the break, Arizona happily realized that she couldn't live without Callie — but Callie surprised them both by coming to the hard realization that being alone made her feel "free." While it was sad to see them break up for good, it was admirable to watch Callie extricate herself from a relationship that was no longer making her happy.

12. When She Helped A Man Walk

Callie's career arguably hit its high point when her clinical trial to help amputees walk again was finally a success. She had embarked on the project with Derek Shepherd (whose neural link was crucial to helping her advanced prosthesis function), and when she saw police officer Dan Pruitt walk for the first time, her reaction was a believable mixture of excitement and sadness. She was obviously thrilled with her own accomplishment, but she also recognized that she hadn't gotten there on her own — Derek, who had just passed away one episode before, had been a major part of the project.

13. When She Fought For Her Daughter

The nasty custody battle that broke out over Sofia in Season 12 came about because of a regrettable break down in communication between Callie and Arizona; but it also gave Callie an opportunity to show how much she loved Sofia, emotionally testifying on the stand about how her daughter had saved her life after the car crash. Things didn't work out for Callie in the end, with Arizona being awarded sole custody of Sofia — but once again the couple reached a compromise, and Callie was able to head off to New York to be with her girlfriend Penny after setting up an amicable custody arrangement with her ex.

We may have seen the last of Callie Torres (or maybe not!) but her 11 years on the show have changed Grey's Anatomy for good — and have shaped the history of LGBT characters on broadcast television, to boot. We'll never forget her.