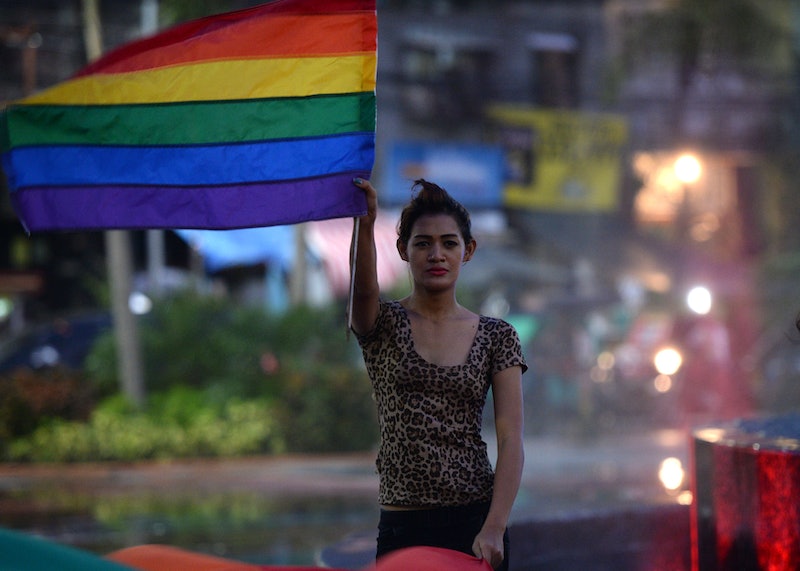 In the wake of the horrific attack at Pulse nightclub in Orlando on Sunday morning, the LGBTQ community — and world at large — has been mourning. For many in the LGBTQ community, mourning has meant coming together to share our grief, support, and love for one another — and the "Queer Self Love" Twitter hashtag is one heart-warming and emotional example of how the LGBTQ community is coming together to build one another up and show ourselves love and celebration. Created by writer, performer, and video maker Dylan Marron on June 14, the hashtag Queer Self Love has gained major traction on Twitter since its launch — and with good reason.

I cannot stress this enough: Visibility for the queer community is so important. It spreads a positive message about the community to those who may be unfamiliar or distant from the community in their daily life. In my opinion, the more honest, nuanced, and positive messages and portrayals of LGBTQ people we get into the media — whether it's in the form of a movie or a television show or a trending hashtag on Twitter — the better; people gain exposure to things that might not occur in their day-to-day lives through all kinds of mediums, and every little bit counts.

In light of the shooting at Pulse in Orlando, which left 49 people dead and 53 wounded, LGBTQ people have been gathering around the country to give one another in-person support and make our presence known to our communities. As the name suggests, the "Queer Self Love" hashtag is particularly important because it responds to violence and hate with love and community. Self-love is important for everyone, but can be especially challenging for people who are often isolated from society or not represented in mainstream media — in this case, the queer community. While the LGBTQ community is still moving forward in terms of advocating for better legal protections and more diverse representation, for example, acts of self-love and community building that happen from behind your computer screen can also make a huge impact. Social media movements like "Queer Self Love" give everyone the opportunity to take community action, even through an app on your phone.

Violence against the queer community is nothing new, and the threat of violence feels very real for most members of the LGBTQ community on a daily basis. LGBTQ people often face a higher rate of assault and sexual violence, higher rates of bullying in LGBTQ youth, and even have a harder time finding housing because of sexual orientation and gender identity. For people who are transgender, these statistics can be even scarier. Rates of violence and discrimination typically go up when it comes to POC LGBTQ individuals, as well.

It's hard to know, specifically, what causes violence against the queer community, or where the motive lies when someone commits a horrendous crime like the shooting at Pulse in Orlando. That said, I personally believe that the more positive and honest representations of queer people we can get out into society — representations like the "Queer Self Love" hashtag — the better. These genuine representations in the media or through social media can remind people that the LGBTQ community is, indeed, just like them. Relating to one another can make a huge impact when it comes to humanizing each other, in spite of our differences or biases.

In this sense, there are many stereotypes about what the LGBTQ community is like, and what it "means" to identify a particular way; however, seeing how real people represent themselves can alleviate a lot of anxiety about "fitting in" or being "queer enough" to take part in the community. For members of the queer community to take back our narrative and take control of our media representation can feel very empowering to us as individuals, as well as inspiring to those who are still in the closet or are afraid to openly identify as queer. It can also help people feel more connected to the queer community to see others who look like them, think like them, and share similar values. The "Queer Self Love" hashtag does this nicely because it offers people the ability to share themselves in the light and manner they feel most comfortable, which is empowering in itself. It also gives others — both inside and outside of the community — a reminder that the queer community has a vast array of diversity.

When it comes to being LGBTQ, visibility can make a huge impact in the way people in your personal circle understand the queer community (such as your parents, roommates, siblings, etc.), as well as how people in your greater area (such as in your workplace, your community center, your place of worship, etc.) see it. When people take to social media to guide their own narrative and bring visibility, it can be amazing and empowering in the aftermath of terrifying violence against our community. The "Queer Self Love'" hashtag is another opportunity for people to showcase the far-reaching diversity of the LGBTQ community, which is especially important as we try to make sense of the violence against the queer community in recent days.

Check out the "Queer Self Love" hashtag unfolding in real time on Twitter.

More like this
The 19 Best Tweets & Memes About Bisexual Awareness Week
By Lexi Inks
An Honest Review of MeUndies Boxers, According To A Non-Binary Person
By Megan Lasher
Pro Footballer Zander Murray Is "Blown Away" By Support After Coming Out
By Sam Ramsden
Why TikTok Is Flooded With Controversial Videos About "Pick Me Girls"
By Courtney Young
Get Even More From Bustle — Sign Up For The Newsletter