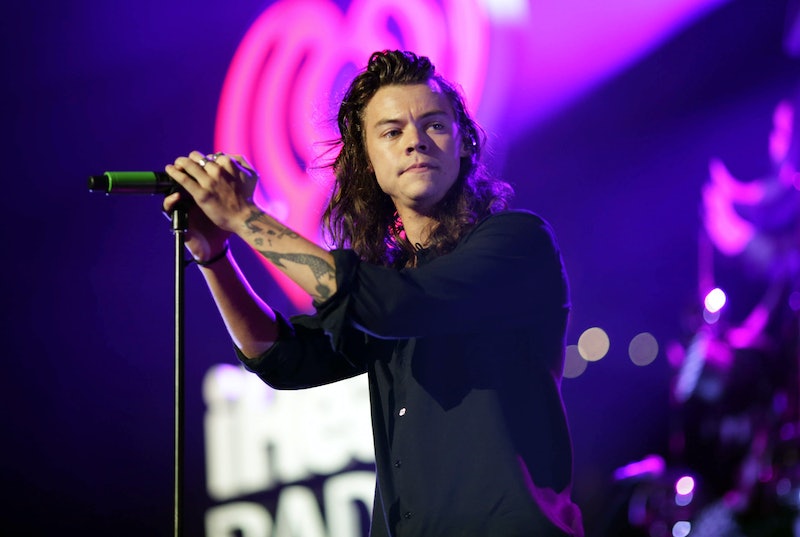 After years of rumors about Harry Styles going solo, it seems like One Direction fans finally have received some solid intel. Billboard reported on June 23 that Styles is starting a solo career, having signed a contract with Columbia Records (Styles has yet to confirm, but Bustle has reached out to his rep for comment). Considering this is the most legitimate report to date about Styles recording music on his own, I have faith that his long-awaited solo career will come true, but when will Styles start recording his album? Just because he signed a contract doesn't mean you should expect new music from him right away.

Not to be a total downer, but the unfortunate truth about the announcement of Styles signing a contract with Columbia (the same label behind One Direction) means that he is presumably in the beginning stages of his solo album and not recording yet. However, most fans know there is hope that this album might not take too long to come out since Styles already registered four solo songs — titled "5378 Miles," "Already Home," "Coco," and "Endlessly" — with the American Society of Composers, Authors, and Publishers. So perhaps those four songs could be on Styles' first solo album and then he already has a third of an album completed.

Unlike Zayn Malik, who left One Direction to release his solo album "Mind of Mine" on March 25, Styles is still technically a member of One Direction (and he better keep it that way). But because the band is on hiatus, Styles' first musical priority is most likely going to be this new solo album since it's not like One Direction is recording new music right now — sigh. To look on the bright side, at least One Direction's hiatus is making it free and clear for Styles to pursue his own music.

Yet while One Direction isn't standing in his way to record, Styles is a bit busy with his budding movie career since he's currently filming the Christopher Nolan movie Dunkirk. (You know, the main reason Styles cut those locks of his.) The Mirror reported on June 21 that Styles was seen signing autographs for fans while he was on set in France, so he's just a little occupied at this time. The WWII movie, starring Tom Hardy and Cillian Murphy, is Styles' first foray into film, so I'd imagine he's focused on that and won't be recording new music until filming has wrapped up. Dunkirk has a release date of July 21, 2017 and Variety listed Styles as part of the ensemble cast, so he could be finished filming and back in the recording studio before you know it.

Any theories on when Styles will release his solo album or even start recording it are purely conjecture at this point since he hasn't officially confirmed the Billboard report that he signed a contract with Columbia. But I believe the Styles solo album is coming — for real this time, you guys — so even if it takes until 2017 to be released, it will be worth the wait.