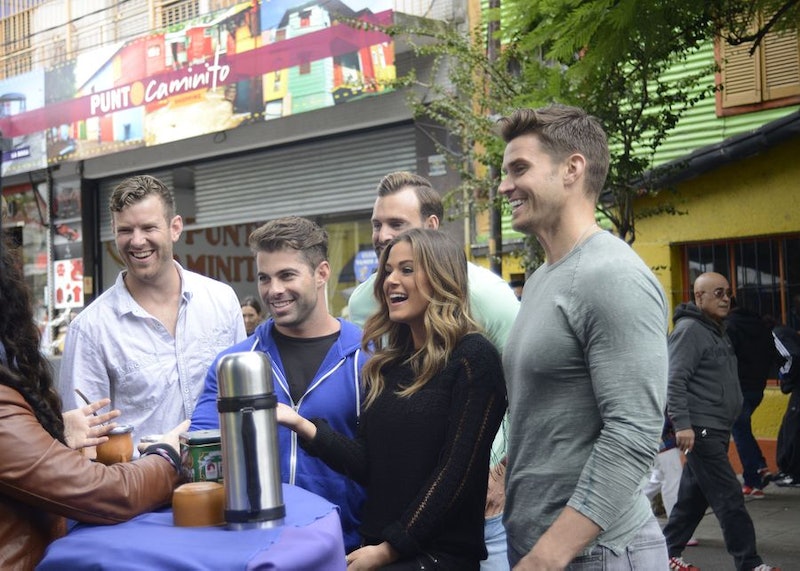 As JoJo Fletcher's season of The Bachelorette has been heaps more entertaining than anything Ben Higgins did on his season of The Bachelor, it's with a heavy heart that I report that JoJo's time as the Bachelorette is coming to a close. Yes, it feels like JoJo has only just begun her journey to find the man she wants to marry, but with only six suitors remaining, the season finale of The Bachelorette will be here before you know it and based on the previews, it's going to be a doozy. When the season finale airs, Bachelor Nation is practically guaranteed a dramatic final rose, so how much more time is left before JoJo's season is over?

Although there has been no official word from ABC, the presumed date for the season finale is August 1, with Bachelor in Paradise officially premiering on August 2. Since the 2 is a Tuesday, it would make sense for the show to do a Monday-Tuesday super Bach special ending The Bachelorette on Monday and picking up Bachelor in Paradise the next night. That means that we'll see JoJo choose her man — or possibly choose no men — in less than a month.

JoJo has already had a series of ups and downs on The Bachelorette (as you do), but it looks like that Final Rose is going to be pretty devastating for her. The preview of the rest of the season shown on June 20 had JoJo rejecting a mystery man by telling him she loves him and then saying, "But what you did to me, it's not right." Through her tears, she tells him how hard it is for her not to accept his love and appears to be preemptively rejecting a proposal.

While I don't know what one of the remaining guys did that was "not right" by JoJo, based on her saying, "Coming into this, I wanted to find love and I found it with a man that will not be able to love me the way I said I wanted to be loved," I have a few guesses about whom she is talking about. So, who's the guy who is going to bring JoJo to tears? Here is the list of the remaining men in order of least likely to most likely to break JoJo's heart in the season finale.

I don't think Alex is the guy JoJo is talking about because I'm hoping he'll be gone long before the season finale airs. He thought JoJo giving James and him both a rose in the June 27 episode was just a "pity rose" so clearly, his ego is more important to him than getting to spend time with JoJo for another week. While he's going to get his one-on-one date, I'm hoping JoJo comes to her senses and sends Alex home sooner rather than later so that he's not even a contender to be the guy who hurts her.

On the flip side, James Taylor is like a puppy dog when it comes to caring about JoJo. Yet, he isn't as innocent as he seems since he appeared to rat out Jordan about a poker game dispute. Yeah, Jordan is probably a jerk, but that was a weird move, James. Not to mention, the attraction between JoJo and James doesn't seem to really be there (at least for JoJo), so I'm pretty sure this guitar-toting suitor isn't going to make it to the final two either.

For some reason, I'm creeped out by Luke, but JoJo seems totally into him (and I quote: "The level of passion that is Luke and me together..."). I really can't get a read on him, so it's possible that JoJo takes him all the way to the final two, but then realizes she can't get a read him on either. But will Luke really have done something to betray JoJo? That doesn't seem like his MO.

Robby could make it to the final episode, but I don't think JoJo wouldn't get the love she wants from him. Considering he's the only guy to tell JoJo that he loves her already (the definition of "too soon"), I'm more concerned that she might be overwhelmed by his strong feelings and let him go. Yet, maybe I've been totally seduced by this swimmer since I find him to be pretty genuine, but recently discovered that Robby had a serious girlfriend not too long ago. Yet, I'm sticking with my number three spot for you, Robby. Don't disappoint me, which I know is an extremely frightening threat since there will be literally no repercussions from me if you do.

I was happy that JoJo chose Chase over Derek during their two-on-one date, but clearly JoJo has some issues with the way Chase communicates. Chase doesn't easily articulate his feelings without some serious prompting from JoJo, which if that continues to be a problem, then it could be the reason she's crying in the season finale. Of course, Chase would have to make it to the final two first, but not being an open communicator could definitely lead to JoJo not feeling loved the way she wants to be.

The man who seems to fit both sets of criteria — someone JoJo struggles with feeling that they are genuine and someone who could be one of the final two remaining men — is Jordan. His number one placement is probably based on how the show highlights that Jordan might not actually be on the show for the "right reasons," so maybe I'm just falling into the producers' trap. However, if JoJo continues to be worried that she's not seeing the true Jordan when it's just the two of them together, but keeps him around because she's falling for him, she could decide at the last minute that it's a bad idea to accept his proposal. While I have no idea how Jordan really feels about JoJo, he seems like the most likely guy that will force JoJo to make this difficult decision.

Bachelor Nation — brace yourself since there is less than a month before ABC will officially reveal who proposes to JoJo and who gets accepted, but take comfort knowing that the episodes along the way will help to whittle down this list.

More like this
JoJo Fletcher & Jordan Rodgers Got Married In A “Playful & Fun” Wedding
By Grace Wehniainen
Twitter Is Upset About The 'American Idol' Top 3 Results: "Who TF Is Voting?"
By Jake Viswanath
Everything To Know About A Potential 'Love On The Spectrum U.S.' Season 2
By Gretchen Smail
Trace Is Dropping Ominous Hints About 'The Temptation' Island Reunion
By Kadin Burnett
Get Even More From Bustle — Sign Up For The Newsletter