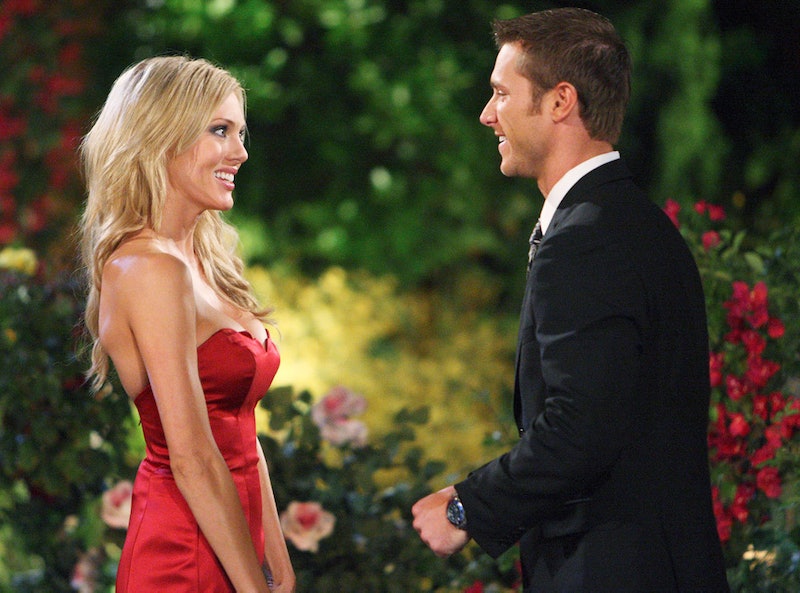 There are a litany of reasons for why someone would want to go on The Bachelor. Fame. Travel. Fun. For the experience. To make friends (though some contestants adamantly defend that last one). Often times "love" or "finding love" doesn't really cap the list. Which is fine and understandable, as everyone who goes on this show has a one in 25 chance of ending up in love and ready to accept a proposal at the end. Still, there are some Bachelor contestants who have gone on the show for the completely wrong reasons.

"I don't know if she's here for the right reasons" is an insult we've heard time and time again in The Bachelor world. Of course, contestants would never admit to that being case, as everyone knows the only "right reason" for coming on The Bachelor is for love. But the majority of the competitors probably aren't coming on for solely romantic purposes, as there are other things to be gained. Some of them just have the ability to hide it better, while some of them actually do find love in the process. Others, however, miss the mark entirely. Below, a ranking of Bachelor contestants who were there for the wrong reasons.

Putting one of Chris Soules' top four choices — and fan favorite — Britt on this list is a controversial choice, but there's no denying that the ladies of the house didn't trust her motives. To most fans, Britt's intentions seemed pure, but the women — particularly Carly — saw her occupation (aspiring actress/current LA waitress), and some of her comments during the show, as a red flag.

It's hard to discern whether or not Lace Morris had pure intentions for coming on the show, as she seemed unnaturally invested in Ben Higgins from the moment she met him. (Like when she put him on blast for not "giving her enough eye contact" during night one.) Since she only made it to three episodes, we'll likely never know.

On Brad Womack's second season, almost everyone thought Michelle was a little much, because she was honest and aggressive. Turns out, she was just forthcoming in what she wanted and wasn't interested in wasting any time (or making any friends). Nonetheless, her calculated moves had the other women — and the fans — a little fearful.

She once wore a T-shirt that said "Gold Digger: Like a hooker... Just smarter." Enough said.

Olivia was pretty, smart, and had a connection with Ben Higgins, so naturally the the other contestants were threatened. She also laid it on a little thick in the beginning, which came across as disingenuous to some. People speculated that Olivia only went on the show to further her career in broadcast television.

Ben Flajnik eliminated Samantha after he called her out for being too aloof on group dates and not taking this seriously. Right before he sent her packing, the Bachelor told her, "From what I’ve seen up to this point, I don’t see this going much further, to be completely honest with you. I wonder if you take this seriously enough." Ouch.

Kelsey seemed like she might have had good intentions, until she started talking about how "amazing her story was" time and time again. Or when the other contestants thought she faked that panic attack, right after the cocktail party was canceled.

Based on the whole where-there's-smoke-there's-fire adage, there's a reason the women didn't get along with Vienna during Jake's season. She came across as calculating and inauthentic.

Samantha flew under the radar during Chris Soules' season, but definitely made a name for herself on Bachelor in Paradise. Since she lied to and manipulated other contestants — including her friend Jeulia — it became clear that Samantha wasn't really looking for love.

Though Courtney ended up getting a proposal at the end, her constant use of manipulation tactics, and saying things like "winning!",made it look she only came on the show to play a game and not to actually fall for the lead.

Tierra's general two-faced behavior led many to believe that her and her uncontrollable eyebrow were not on the show for the right reasons.

After finding out that she was still in love with someone back home during Episode 6, Ben Flajnik immediately sent Casey packing.

When Rozlyn got kicked off the show for her relationship with a producer, it became clear that she probably didn't come on The Bachelor to meet the love of her life. She has since denied that anything inappropriate went down, saying, "If I had known that I was going to get accused of it, maybe I would have gone for it," while Chris Harrison told People, "She had a physical relationship with a producer on our show. I cannot make it any clearer."

Wrong reasons or not, The Bachelor wouldn't be the same without these contestants.