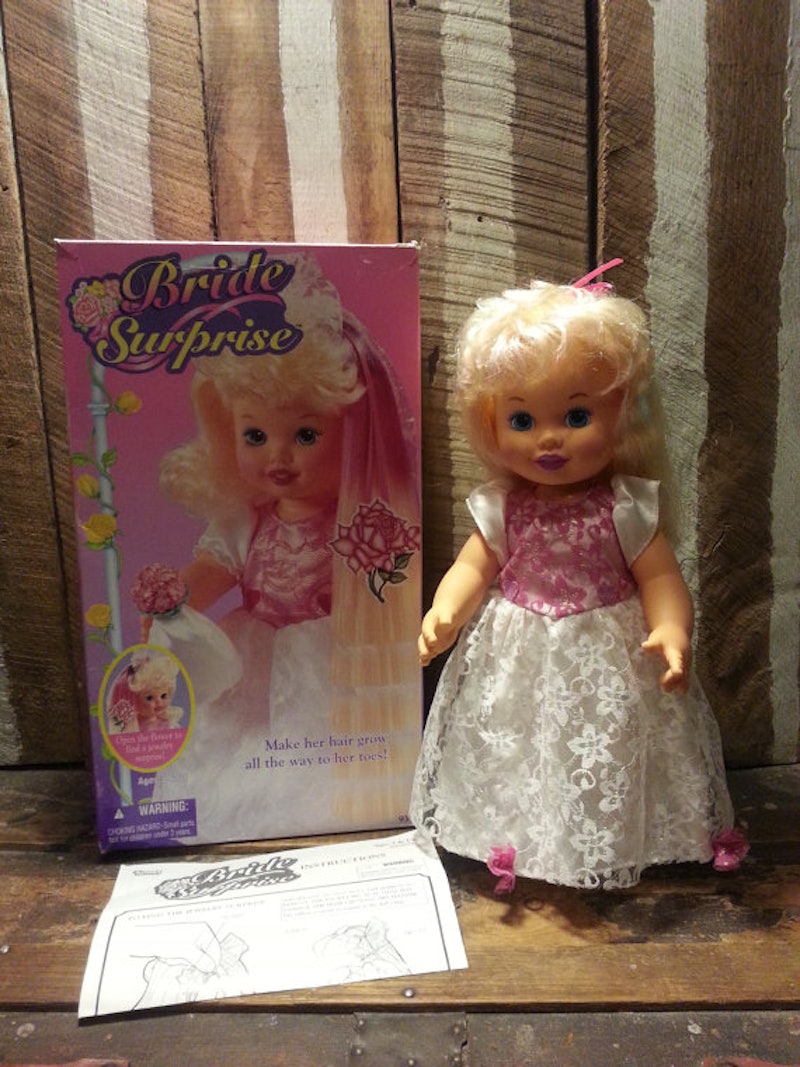 Remember when your parents turned your bedroom light off and left you alone, only for you to feel terrified about the things lurking under your bed? Well, it turns out you had good reason to be freaked out, considering the creepy '90s fashion and beauty toys you likely had in your collection.

As if your Goosebumps books and your brother’s Boglins weren’t spooky enough, it seems that many manufacturers of 1990s fashion and beauty toys aimed at girls were trying to frighten us. Sure, we loved our girly toys that gave us an insight into the world of "womandom," whereby doll hair grew in seconds or makeup always looked perfect. But when night time came around, or you were playing alone in your room and your imagination got the better of you, you likely saw your toys in a sinister new light. Smiles became evil, eyes blinked on their own, and you could have sworn you left your toy on the bookshelf but it was suddenly right next to you.

Aside from the scary amount of plastic used in these toys — I honestly dread to think what percentage of the plastic in landfills is comprised of discarded '90s toys — there’s also something a little eerie about them. Check out these creepy ‘90s fashion and beauty toys... if you dare.

Poor little Sweet Secrets people: Forced to fold their bodies away when their masters wanted to wear them as jewelry or play with them. Nobody will ever know their plight.

Pony Land had a secret... Someone had been carving holes in the horses and filling them with "surprises." ~Shudders.~

Am I the only one who imagined this creepy-faced doll holding a miniature knife instead of a topsy tail? That smile is super unnerving and reminds me of Goosebumps' Night Of The Living Dummy .

Because dolls watching you while you slept weren't creepy enough, these ones came dressed in ominous, seemingly dissolvable nighties. I dread to think of what kinds of chemicals were used in the creation of those.

Apparently all it takes is one swift movement, and all your hair's gone. This and the gaping "holes" left in the faux razor's wake were enough to put any kid off going to the hairdresser.

Just pump this doll's little arm up and down and her hair would start to "grow" like it had a mind of its own. As if that wasn't freaky enough, the entire concept of this child-like doll named "Bride Surprise" was insanely creepy. I mean, did it really have to be wedding-themed?

Hands up if you remember Puppy Surprise or Kitty Surprise. These toys were mommy cats and dogs that had a velcro hole in their bellies, where you would pull out a "surprise" number of plastic-faced pups or kittens.

This toy, however, was a spin off from the originals: These were additional puppies or kittens to add to your collection. Sounds sweet, but if you were ever wondering how our generation began dressing up their pets in horrendous, human-like clothing, perhaps these toys might be to blame.

It seems '90s toy-creators were obsessed with making everyone a blushing bride, including these puppies, since a bridal gown was one of the surprise costumes you got free with your pooch. Super weird.

Become a giant swan-riding overlord and rule over your Krystal Princess and her Krystal Princess Bedroom Suite. Trap your princess inside a snow globe and take her out when you fancy practicing your hair-combing skills and showing her off to your friends. Put her back inside the prison when you're done.

Whether you got your sister's hand-me-down of this exact late '80s version, or a later adaptation, you probably loved pretending you were a salon owner with your Barbie head. However, when you woke up in the middle of the night, there was nothing creepier than the large decapitated head of Barbie, staring unblinkingly at you in the darkness.

Anyone else want to throw these creepy '90s fashion and beauty toys on a bonfire? According to scary novels of our childhood, the ghosts of the toys will haunt us if we did that. So we best keep them hidden away in our attics for now.