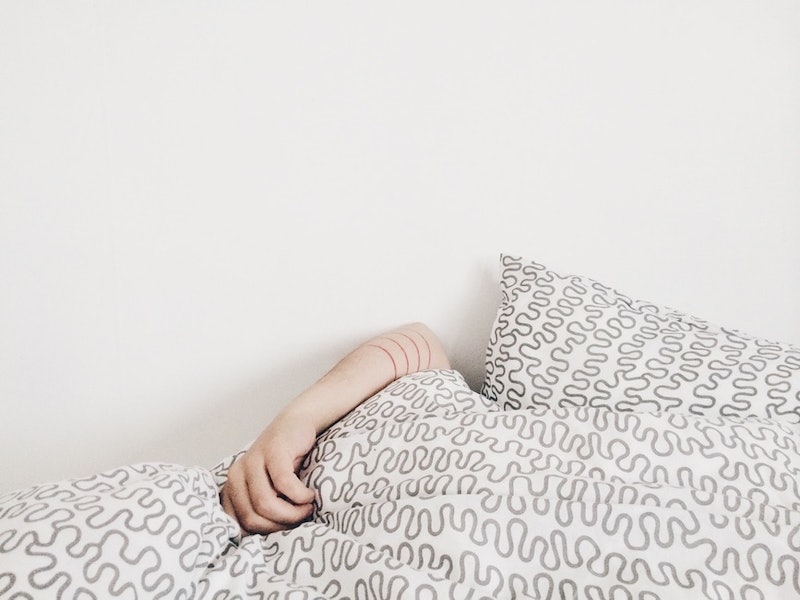 Isn't it funny (OK, annoying) when you go to bed on time, wake up seven to nine hours later, and still feel tired? This is one of many signs you aren't getting a good night's sleep, and it can be utterly baffling. After all, you just spent the night curled up in your comfy blankets. Shouldn't that be enough to make a person feel well-rested?

Well, as it turns out, there are all sorts of reasons why you might not be getting a good night's sleep. "Sleep quality can be compromised by physical issues such as sleep apnea, restless leg syndrome, reflux, and many other medical conditions," says Janet K. Kennedy, Ph.D., clinical psychologist, author, and founder of NYC Sleep Doctor over email. "It can also be affected by stress, depression and anxiety, among other psychological issues."

If any of those issues sound familiar, it may be worth getting yourself checked out — all in the name of good health, and a better night's sleep. And while you're at it, why not check on your sleep habits, too? Allowing yourself to wind down at night, sans electronic devices, is a good place to start, according to Kennedy. As is setting up a strict sleep/wake schedule, and a simple bedtime routine. (Think reading quietly, instead of watching Netflix.)

With all that in mind, here are some signs you didn't sleep well. Take them as a hint that you need to follow the above advice, and get yourself to bed.

It's one thing to drift off during a long train ride, or while watching a movie late at night. It's an entirely different thing to be utterly powerless over your heavy eyelids. "Falling asleep spontaneously when you don’t intend to is the best indication of sleep deprivation," says Kennedy. This is not only dangerous, but also a sign that you need to get your sleep in check, ASAP.

2. Decisions Are Your Undoing

There are some mythical humans who are good at making decisions, and then there are the rest of us. Add a lack of sleep into the mix, and things can get really bad. That's because tiredness makes it difficult to distinguish between important and irrelevant information, according to Kaitlin Bell said on Prevention. "The result: Even the simplest decision takes on exaggerated importance."

3. You Wake Up Feeling Tired

Like I said, things can get pretty confusing when you go to bed on time, but still wake up feeling exhausted. When that's the case, it's likely you aren't sleeping soundly during the night, according got Kennedy. The aforementioned health issues may be to blame, so again — get yourself checked out by a doctor.

4. Everything Makes You Cry

Hallmark commercials are sad, but they aren't that sad. If you find yourself tearing up over everything, it could be a sign of stress, or PMS. But it could also be (surprise, surprise) a lack of sleep. "Without sleep, you are more emotionally volatile," said Bell. If you find yourself feeling this frayed, get thee to bed.

5. You Are Super Forgetful

Sleep helps with memory consolidation and emotional processing, according an article by Rachel Grumman Bender on HuffingtonPost.com. Without it, your brain has no idea what's going on, and you may feel confused and forgetful as a result.

6. You Look A Little Worse For Wear

There really is such a thing as beauty sleep, since your skin uses that time to repair damaged cells, according to Rachel Swalin on Health. So it makes sense that a lack of sleep can lead to some decidedly haggard-looking skin.

Chronic sleep loss disrupts blood sugar levels, which fires off a chain reaction that increases appetite, according to Bell. "Because of these physiological changes, you may be more likely to overeat when you skimp on sleep — and the food you pick probably won’t be either nutritious or a lasting source of energy," she added. Cue cravings for french fries, donuts, and burritos galore.

8. You Are Clumsier Than Usual

According to Bender, skimping on sleep can also cause issues with motor skills, such as being unsteady on your feet, or stumbling when carrying your things. It may explain why you're constantly bumping into things, spilling your food, or inexplicably dropping everything you pick up.

9. Having A Cold Is Your MO

Do you tote around tissues 24/7? It could be allergies, or it could be the fact you haven't gone to bed on time in ages. "Inadequate sleep can leave you more vulnerable to infection than those who are well rested," said Bell. If sounds like you, try hitting the hay earlier. More sleep can help boost your immune system, and make you impervious to the office cold.

10. Sex Is The Last Thing On Your Mind

"Fatigue can be an important factor when it comes to why women aren’t in the mood for sex," said Louisa Kamps on Real Simple. So if you're usually down to hook up with you partner, but haven't felt like it as of late, getting more sleep may help.

11. You Feel Way Too Stressed

Stress can keep you up at night, and it can be made worse by a lack of sleep. (How unfair is that?) When the cycle get out of hand, you may find yourself totally losing it. "Running short on sleep seems to lower the threshold for 'stress perception,'" said Tom Scheve on HowStuffWorks.com. That means you may view the simplest things — like waiting in line at the grocery store — as totally life-ruiningly terrible.

Clearly, sleep deprivation is not only entirely unhealthy, but it's really annoying to deal with, too. A lack of sleep makes life way more difficult than it needs to be, so be sure you follow good sleep hygiene, and get to bed on time.