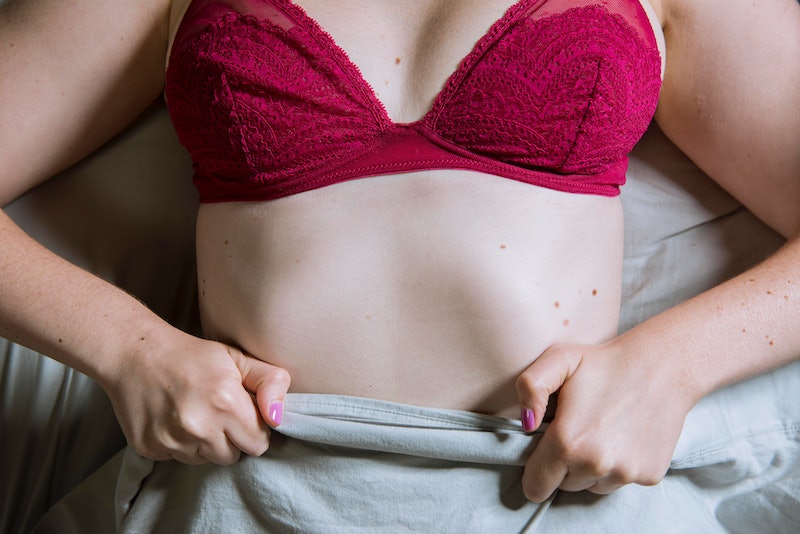 For all the fun that comes with having sex, it’s definitely not without its concerns. According to a 2016 survey by Superdrug Online Doctor on the most common sex fears, at a ranking of 6.9 and 6.0, out of a possible 10, STIs and accidental pregnancy are top ones, respectively. However, sex concerns don’t stop there. You could be rolling around, having the time of your life, and suddenly a worry sets in and you’re thrown off your game. Then you end up spending the next 20 to 40 minutes obsessing about that fear instead of being in the moment. Great sex requires being in the moment (among other things), so without that, most bets are off.

But having sex fears is totally normal. And, even the ones that you may think aren’t all that common, actually are. “I think the most common fear I hear from my clients is fear of disappointment,” Sarah Watson LPC & Sex Therapist tells Bustle. According to Watson, this fear of disappointment isn’t just about performance, but everything in between. While these fears are common and normal, they can interfere with intimacy and one’s ability to really enjoy the act of sex.

Are your sex “fears” common? Probably. And if they’re not all that common, then that’s cool, too. The point is to realize that fears are a standard part of having sex and you just shouldn't let them get in the way of a good time. Here are seven sex fears you may have never realized were so common.

OK, so maybe this one isn’t entirely a surprise, but according to Watson, it’s absolutely common and in more ways than you think. A 2016 online survey of 2,000 people, ages 13 to 64, found that with 70 percent of men having a positive, or at least a neutral opinion of their body, men are twice as likely to love their bodies than women.

But for women, that physical appearance fear isn’t just related to the outside of their body and the insecurities that come with the media’s portrayal of unrealistic body images, but also extends to the vagina. Some women struggle with the look and smell of their vagina, further adding to fears and hang-ups in the bedroom.

Performance is also a big a fear for many. Although we often equate fear of performance to something mostly men experience, sexual performance anxiety in women is a real thing. As Dr. Jennifer Caudle, Family Physician and Assistant Professor at Rowan University told Bustle, "This is something that happens to women of all ages. It is not the most common complaint [from my patients], but when they are comfortable, these things come out." However, because it's presented as something that affects mostly men, women don’t seek the professional help that they should, in order to remedy the situation.

For men, there’s the fear of climaxing too fast. But for women, on the other hand, it’s about not having an orgasm at all, says Watson. As sex therapist, Vanessa Marin, wrote for Bustle: “One of the biggest myths about female orgasm is that women can climax from penetration alone. In fact, only 20-25 percent of women can. That number may be even lower, as indirect clitoral stimulation frequently occurs during intercourse.”

Basically, if you can’t orgasm without clitoral stimulation, you’re in the majority (welcome to the club!), so there’s no shame in not achieving orgasm through penetration alone. Instead of letting this fear rule the bedroom, include your clitoris more and experiment with sex positions that are more likely to lead to an orgasm.

Although the amount of foreplay that's necessary for someone to become aroused differs — it does take men less time, that’s for damn sure — by and large, it takes at least 20 minutes for a woman to be become aroused.

Because this is the case for many women in heterosexual relationships whose partner is ready to go right away, the fear of taking “too long” to become aroused can definitely make for an interference in enjoying sex. But as long as you keep in mind that you may need more time than a male partner, you can hopefully let that fear subside.

Ah, yes — sexual desires. As Watson has found in her practice, what one desires in bed can also be a fear. If your sexual desires are a bit kinky in nature, it can be hard to communicate that initially. Depending on your partner’s preference, you could find yourself with someone who’s just not on the same page as you sexually and it can feel awkward. But don’t let it. We all have sexual fantasies, we all have our own version of sexual kinks, and if your sexual desires are met with a, “Um, no thanks. That’s not my scene,” then that’s fine. At least you put it out there.

From an inability to perform, to the fear of being “bad” at sex, to even the potential for awkwardness after sex — definitely something that can arise after having a one-night stand — general self-doubt is a big fear. “I think most people struggle with self-doubt in bed and don't have the communication skills to discuss it with their partners,” says Watson. “This can be overwhelming and a fear that slips into the moment while trying to be intimate.” Which brings me to…

Honestly, depending on how well you know your partner and how comfortable you are around them, it can feel a bit intimidating to communicate what you want in bed. Even giving a bit of direction to a partner can feel scary. If you verbally can’t find the words to convey what you want, showing it with your body language can be easier. Most people are open to direction and input. And if not? It's time to find a partner who isn't selfish in bed.