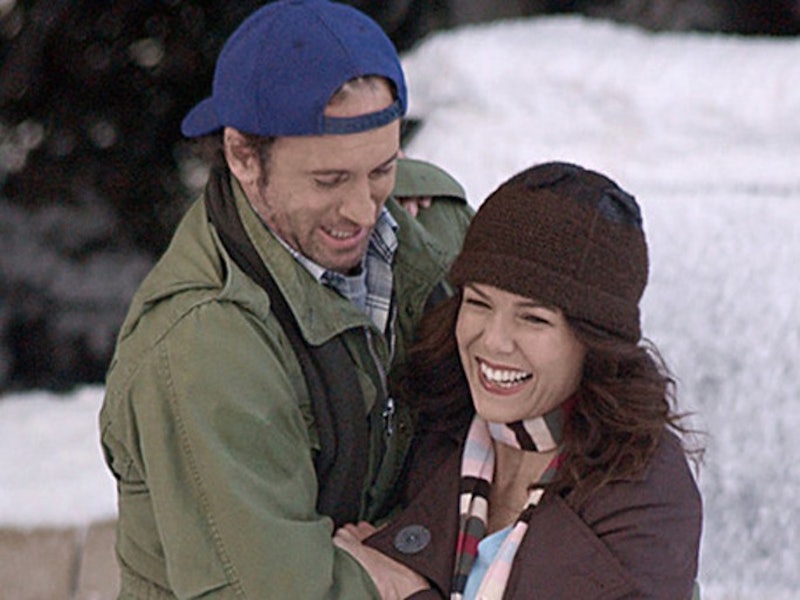 At this stage in the game known as "desperately scouring the internet for juicy Gilmore Girls revival spoilers," Well, for now, 'shippers of one such romantic relationship can breathe a sigh of relief. Scott Patterson has confirmed that Luke and Lorelai are together in the Gilmore Girls revival. In an exclusive interview with People Magazine, Patterson stated that though he "can't share much" information regarding Gilmore Girls: A Year In The Life, there was one juicy titbit which he was happy to confirm, "I can tell you that we are together ... We are together and we're sort of figuring out our next step."

Sorry, I just spilled my coffee all over myself while monumentally cheering over this fact. Fans will remember, of course, that there was an on-set photo from the Gilmore Girls revival that showed Luke and Lorelai holding hands. But, since then, there's been little other solid evidence that they two lovebirds have finally worked things out. Hold up just one second, though. What does Patterson mean when he says that Luke and Lorelai are figuring out their "next step"? Well, friends, there are actually more than a few possibilities, and I'm actually more than happy to go through them with you.

Look, this is Luke and Lorelai we're talking about. Those two had more on and off moments than Jess' scrappy, constantly stalling car. Considering that the Gilmore Girls revival is taking place eight years after we last checked into Stars Hollow, it could be that their relationship wasn't smooth sailing for the entirety of that time. When we last saw Luke and Lorelai, they'd finally found their way back to each other and celebrated with an (oh my god, I'm gonna cry) amazing kiss that seemed to signify their relationship wasn't just back on, but also perhaps even final. Fans speculated that they maybe got re-engaged, but it could be the case that they decided to simply (and wisely) take things slow.

The fact that they're still trying to "figure out" their next step in the revival seems to imply that they opted for the latter option and, as such, there may have been plenty more break-ups in the mean time. The "next step" could be something as simple as realizing that they can't imagine their life without each other, and not wanting to exert any additional pressure onto that fact.

2. Having A Baby Together

Oh boy, the internet has been lit up since various mysterious clues have seemed to hint that Lorelai could be pregnant in the Gilmore Girls revival. First, there was the "I'm with human" sweater, coupled with an oddly placed, midriff-hiding newspaper in the trailer that seemed to tease the possibility of Lorelai being pregnant in A Year In The Life. And then there was an Instagram image from the official Gilmore Girls profile, which showed a plate of pop tarts surrounding the one, solitary apple. (Fans will remember the episode where Lorelai suspected she was pregnant because she, god forbid, craved an apple for once).

If Luke and Lorelai are figuring out their next step, then it could be because the pregnancy was a total surprise and they have no clue how to deal with it. But the next step could also just be factoring in a child to their relationship, and having to make lifestyle adjustments necessary to raise a family together in a way which makes them both happy.

The last time that Luke and Lorelai were engaged it really didn't work out, but there was a lot of factors working against them. Eight years on seems like a healthy patch of time within which the couple could have re-evaluated their relationship, worked out some problems and enjoyed a more stable relationship together. An engagement, and a wedding, could be the obvious "next step" that Patterson may have been referring to.

Ah, but then there's The Twickham House. Which, you'll remember was probably Luke's most romantic moment in Gilmore Girls. He not only fought the town elders to buy it for him and Lorelai to live in back in Season 5, but Lorelai also kind of rejected the gesture since she didn't want to abandon her own home for it. While it's understandable that Lorelai would dearly love the home that she raised Rory in, and which so represents the independence she clearly values, it was also classic Lorelai commitment avoidance territory. Moving in with Luke was a big step, and one that she clearly wasn't ready for.

But, eight years on, and with Rory having officially flown the nest, perhaps the next step for Lorelai, as well as for Luke, is for her to fully embrace her comittment to him by moving in. Plus, that house would be a beautiful beginning for raising their new child within, should Lorelai be pregnant. So here's hoping that Luke can re-buy that dream house in order to make a home for their future. And who knows, perhaps Lorelai will hand over the family home to Rory?

5. Finally Being Accepted By Emily

Let's be honest, Emily was never a fan of Luke. She often teased Lorelai for the fact that she was so clearly in love with him (even if she could barely admit it to herself, initially) and also gave him a frosty reception whenever she saw him. It's easy to imagine Emily getting herself involved in Luke and Lorelai's relationship throughout those eight years, as she often did do with any of Lorelai's love interests. Luke is a very traditional man at heart, and, as such, it's reasonable to imagine that he'd still want her family's support of their relationship (whether he likes or respects them or not) in order to take it to the next level.

The next step then could be just to finally have Emily's blessing on their relationship. Perhaps the death of her beloved husband, Richard, may have provided her with some fresh perspective on life and love, and who knows? She might even be the one to push the both of them to make a lasting commitment to one another, and enjoy their lives together.

Whatever Luke and Lorelai's next step will be, it certainly sounds as though their romance is finally moving in the direction that fans have craved since the very first episode of Gilmore Girls. Just know that I'm going to be watching the Gilmore Girls revival with a bottle of champagne chilling in my fridge, ready for the potential of Luke and Lorelai maybe exchanging wedding vows and, possibly even having a child together. Cheers to that.