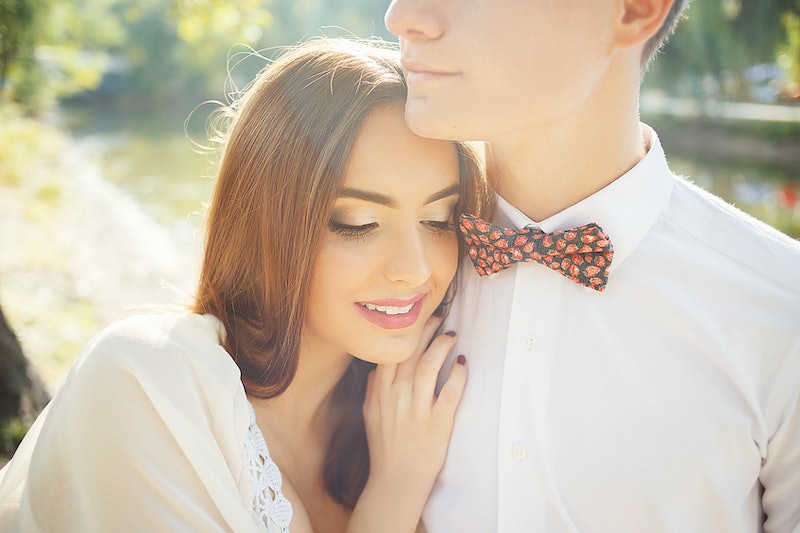 You've probably heard that "nice guys finish last," but being nice might actually help you get ahead — when it comes to sex, that is. Despite the ever-present trope that straight women love "bad boys" (aka grown men who act like jerks), it seems that women (and men, too) are much more willing to sleep with someone who's *gasp* actually nice. New research shows that being a do-gooder might be one of the many traits that make you more likeable, and your kindness might end up having a (slightly selfish) payoff.

According to a study published in the British Journal of Psychology, how kind you are to others could be linked to how often you have sex. Researchers asked 192 women and 105 men to complete a survey about their altruistic habits — how often they gave to charities, gave blood, helped out their neighbors, etc. — and then the respondents self-reported on their sexual histories. In comparing the participants' responses and their sex lives, researchers found that people who scored higher on the altruism survey were likely to have had more sexual partners.

"There is a common phrase that 'nice guys finish last' and it is absolutely untrue," Chris Armstrong, Certified Relationship Coach and owner of Maze of Love, tells Bustle. "Timid guys finish last. Society has used the phrases 'nice guys' and 'bad boys' for so long that we only think about people in these two camps instead of adding a third camp: timid guys."

Armstrong says that, as a society, we've made some serious generalizations that lead to a false sense of how to gain success romantically. "Women are not attracted to bad boys, they are attracted to confidence, ambition, humor, kindness, intelligence and emotional availability," he says. "But our overly broad use of these traits tells us that: confidence goes hand-in-hand with arrogant and loud; ambition goes hand-in-hand with rich, controlling, and selfish; and kindness and emotional availability go hand-in-hand with weak and even effeminate." Based on these notions, he says, we then make a mental leap that bad boys are confident and ambitious while nice guys are kind and emotionally available — and ignore the fact that any given person (regardless of gender or sexual identity) can be any combination of any of those traits.

So according to this new research, being nice, kind, and generous might actually be positively impacting your romantic success. Although there's nothing wrong with a little more charity work either way, it's also worth noting that the results were self-reported and, naturally, people's perceptions of their own sexual histories and philanthropic efforts might be a bit skewed.

Now that you know that doing good for others might be the trick to getting more action, feel free to sign yourself up for to volunteer at a soup kitchen or animal shelter — you might just meet a special someone during your volunteer work. If volunteering isn't your cup of tea, here are five other habits that could put you help you find a good match (or maybe just a one-night-stand, if that's what you're looking for).

1. Don't Be Afraid To Crack A Joke

Having compatible senses of humor is incredibly important when it comes to choosing a partner — one study from the University of Kansas even found that the more times a woman laughed at a man's joke, the more likely it was that she was romantically interested. You don't need to come up with a stand-up comedy routine to show off to everyone you meet (in fact, please avoid this at all costs), but being able to snap back with a witty retort can certainly help your odds when it comes to finding romance.

Being a good listener is definitely an underrated quality. Sure, someone might sit still and listen to your many grievances, but someone who's a great listener will know when to offer advice, and when to simply be a shoulder to cry on. Good communication is vital to successful relationships, and being an active listener will massively help you and your partner work through any problems that arise.

3. Show Off Your Smile

You attract more flies with honey than vinegar, so even if you have Resting Bitch Face, it might be worth your while to crack a smile every now and then. Smiling is a universal tactic for flirting: it makes you seem more friendly and confident, and therefore more approachable.

To be fair, not everyone is affectionate by nature — and that's perfectly OK. You don't have to be overly touchy-feely to show affection; just do whatever is comfortable for you. Flirting with someone new and want to give a subtle hint you're into them? Touch their arm lightly from time to time. Want to show them you appreciate something they did for you? Offer up a backrub. A study from Arizona State University found that the reason we crave affection so much is partly because it lowers stress hormones, so showing affection to others is a great way to attract a potential partner.

Although there's a fine line between confidence and cockiness, being proud of who you are is a surefire way to attract a partner. It might sound like a cliche, but loving yourself is the first step to loving someone else. If you project confidence, others will be drawn to your positivity, which could mean you're on the fast track to finding someone to be the other half of your power couple.