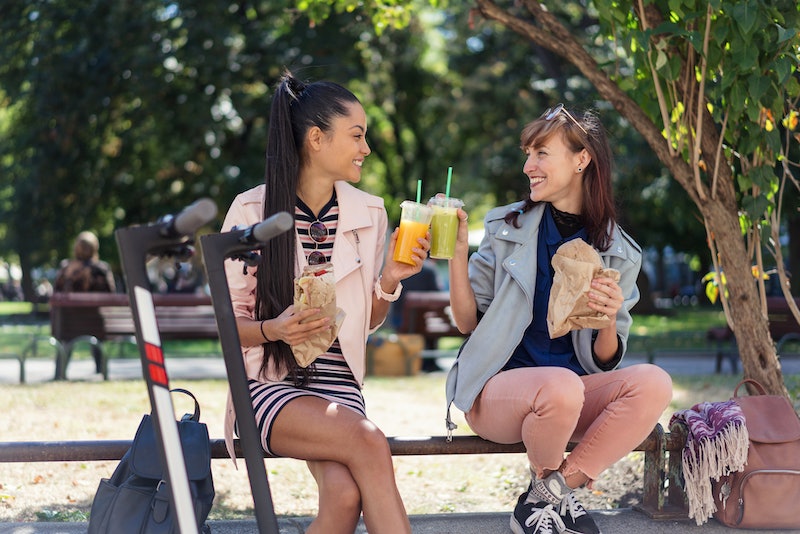 I'll just go right and say it: I'm thankful to be a Millennial. Or, actually, let me rephrase, because I'm tired of the word "Millennial" — not because it's a bad word, but because people see it and immediately tune out. (I didn't say it was fair, but it definitely happens.) I'm thankful to be born in this generation, this fierce, creative, collective group of humans arbitrarily born in the same timespan who have managed to carve out a space in the world, who have shouldered an immense, generations-old weight, and who have not cracked — at least not yet.

I didn't always feel this optimistic (and some days, I still don't). Anxieties about the future continue to paralyze me. It doesn't always seem fair that I was born in a time of such constant upheaval and change and, let's be real, bad news. There has been a lot of bad news lately, and sometimes, it is soul crushing.

But we, as a generation, are in a position to affect serious change. We have inherited a myriad of potentially catastrophic problems, but we also have the tools to fight it, and are continuing to invent more. Plus, we've had the privilege of seeming some pretty cool stuff come to fruition. You know, like the internet. And Harry Potter. Oh, and Beyonce. I'm very, very thankful for Beyonce.

1. We grew up with the internet

2. And with Harry Potter

We met Harry Potter, an 11-year-old boy who discovers he's not only a wizard, but a really, really famous one, in 1997, and the world has never quite been the same since. They've also never been quite the same for meeting all of Harry's amazing friends and loved ones. Heck yes.

3. AND with Topanga Lawrence

Topanga Lawrence was the '90s feminist icon I tried to emulate growing up. Sure, she can be a little heavy-handed, but IDC. I love her so much.

4. We've seen the first Black president of the United States

And for many of us, 2008 was our first opportunity to vote in a Presidential race. And if it wasn't (like it wasn't for me — that's what happens when you're a younger Millennial), then at least we got to vote for his second election.

5. And the Obergefell v. Hodges ruling

No, it didn’t fix everything. Yes, we still have a long way to go. But the striking down of same-sex marriage bans as unconstitutional was one of the biggest moments in history, and it was on the right side of history, and that really, really matters.

6. And the first female presidential candidate to win a major party nomination

Regardless of how you feel about Hillary's policies, it really is remarkable that women only began receiving the right to vote in 1920 (and that statement pretty much only applies to white women, by the way). Like, Hillary's mother was born into a world without the 19th Amendment, and now her daughter may very well be the next POTUS.

7. And the summer of Simone Biles and Simone Manuel

At 19, Simone Biles is the most decorated female gymnast in history. At 20, Simone Manuel is the first Black woman to win an individual Olympic gold medal in swimming. Why is that particularly monumental for an American swimmer? Because swimming pools in the United States have a long, racist history, the consequences of which include a recent poll which revealed that up to 58 percent of African-American children don't know how to swim, and that African-American children are three times as likely to drown as their white counterparts. Remember that whole thing where so many of these things matter? They matter. A lot. They have the power to change things for the better.

8. We survived the fashion of the early aughts

9. And permanent documentation of early aughts fashion on ~the internet~

10. We've adapted social media as a means for social change

Our generation's use of social media is absolutely, 100 percent a complicated issue. And while there are plenty of negatives, it's also provided a platform for people to self-identify, self-represent, and spread information, which is particularly important for populations that tend to be under-represented or negatively represented by the media.

11. Oh, and we've essentially created a new form of comedy built around variations of the smiley face

Emoji use is NUANCED and I won't hear otherwise.

We've consciously witnessed the rise of the internet, technology, smartphones, social media, and increased awareness towards inclusivity. And we've survived. We've thrived (kind of). And though we don't know what the world will look like in a decade (or honestly, even in a few months), we'll keep surviving.