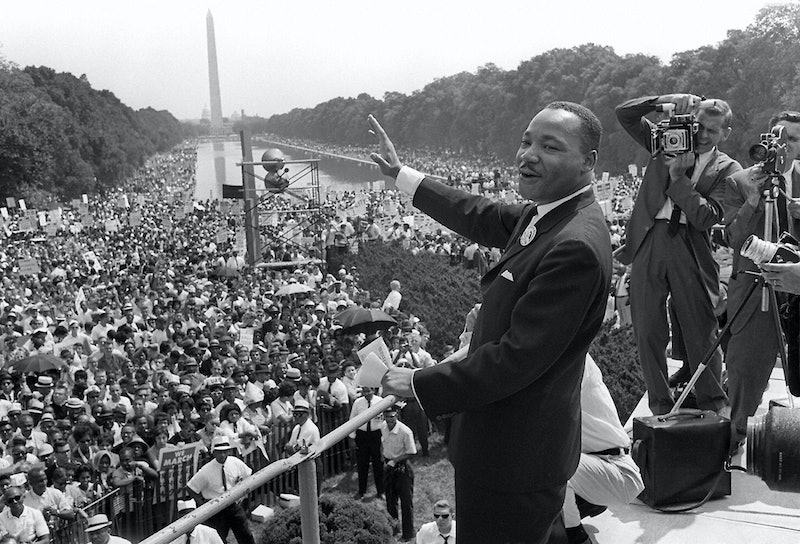 Fifty-three years ago, on August 28, the Reverend Dr. Martin Luther King Jr. gave his iconic "I Have A Dream" speech. While King has been mostly sanitized as America's hero, "I Have A Dream" is a revolutionary speech that condemns racial injustice, demands equality for all marginalized people, and seemingly seeks to dismantle racist structures all across the United States. Near the beginning of King’s legendary speech, he offers a few lines about the bounced check America’s made out to black Americans.

“In a sense we've come to our nation's capital to cash a check,” he said. “When the architects of our republic wrote the magnificent words of the Constitution and the Declaration of Independence, they were signing a promissory note to which every American was to fall heir. This note was a promise that all men, yes, black men as well as white men, would be guaranteed the 'unalienable Rights' of 'Life, Liberty and the pursuit of Happiness.' It is obvious today that America has defaulted on this promissory note, insofar as her citizens of color are concerned. Instead of honoring this sacred obligation, America has given the Negro people a bad check, a check which has come back marked 'insufficient funds'."

The charismatic preacher and organizer's 1963 speech is bursting with unifying rhetoric around America's ability to be exceptional. King spoke powerfully about how his fellow Americans could build a just nation where all citizens, regardless of their race or ethnicity, can have access to equality. "And so even though we face the difficulties of today and tomorrow, I still have a dream,” he said. “It is a dream deeply rooted in the American Dream. I have a dream that one day this nation will rise up and live out the true meaning of its creed: 'We hold these truths to be self-evident, that all men are created equal.'"

While I'm a middle-class black American woman with two degrees, I still must bear witness to the same atrocities King spoke of. I am still writing about racism — police brutality, housing segregation, failing schools — the very issues King fought to dismantle.

Some politicians misinterpret King’s speech to mean Americans should live in a colorblind society where good character traits are enough to circumvent racism. Republicans have appropriated “I Have A Dream” to rebut everything from affirmative action to the Affordable Care Act. Take the time when actress Stacey Dash said on Fox News that she supported candidate Mitt Romney "not by the color of his skin but the content of his character," an oft-quoted line from "I Have A Dream."

This is why understand not just the most-quoted lines, but also the rest of Dr. King's speech, matters so much: He lays out a dynamic vision of an America where justice for marginalized people is first priority. He wants to cash the check.

“I Have A Dream” is truly a radical speech that’s especially relevant in a tumultuous America where systemic inequality still runs rampant. There's been racial progress: America's first African-American president is completing his second term. "Whites only" signs no longer dominate lunch counters, water fountains, and bathrooms. Movie theaters, buses, and schools aren't legally separated. Washington, D.C. — the political city where King delivered "I Have A Dream"— is gearing up to open the first national African-American museum, mere feet from a statue honoring King himself.

But the check is still being returned with insufficient funds: Black women are the most educated group in America — and still making 60 cents for every white man's dollar. “I Have A Dream” matters in a world where the faulty “black-on-black violence” argument is used to negate state-sanctioned violence against black people. Dr. King’s powerful words matter in an America where children of color are funneled through the school-to-prison pipeline while their parents are incarcerated in droves. Black Americans are redlined, segregated, and have been stripped of the same voting rights King fought to instate.

While I'm a middle-class black American woman with two degrees, I still must bear witness to the same atrocities King spoke of. I am still writing about racism — police brutality, housing segregation, failing schools — the very issues King fought to dismantle. It's emotionally taxing to again and again and again write about another African-American being gunned down by those tasked with serving and protecting us. The burden is heavy, but I imagine it was even heavier on King when he delivered "I Have A Dream."

“We can never be satisfied as long as the Negro is the victim of the unspeakable horrors of police brutality,” King said. If that is the measure of equality, black Americans are still not satisfied, and haven’t been offered justice. If the criminal justice system is designed to protect the innocence of the innocent and convict the guiltiest of the guilty, it has immeasurably failed black Americans. High-profile cases of police violence in Baton Rouge, Milwaukee, and Minneapolis have sent activists to the streets, demanding justice. Yet the vast majority of officers who shoot the fatal bullets never spend a single day in jail.

The boiling racial tensions make this particular "I Have A Dream" anniversary that much more painful. For all of the progress America has made, there's still a check marked "justice" that's being returned with insufficient funds. MLK’s dream of a just world for people of color is still unfulfilled — and until America addresses systemic inequality, we will all be waiting for the check to be cashed.