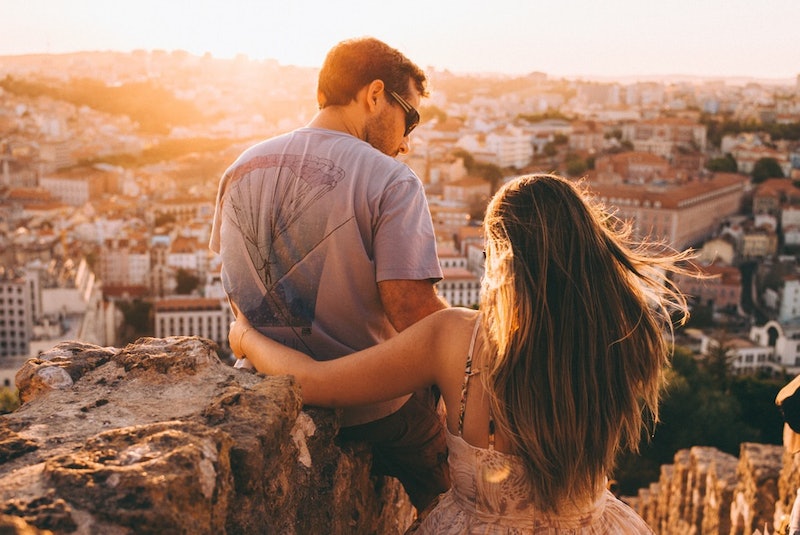 If your relationship has been struggling along, then you've likely experienced that sinking feeling that things might not work out. And hey — sometimes that feeling is 100 percent right. But if you and your SO are meant to be, there will be some pretty obvious signs your relationship is still worth working on.

I'm talking about the positive aspects that keep you and your parter sticking around, despite the bumps in the road. For a comparison, think back to your past relationships that didn't pan out. Can you see the difference? Those old flames were likely rife with unfixable problems — the kind that almost always cause a relationship to fail. As Irina Firstein, LCSW, explains in an email to Bustle, "Some ... deal breakers are lack of trust, numerous failed attempts at fixing it in therapy, [and] when the feeling is that there is no life or energy left in [the relationship.]"

When these types of problems abound, parting ways is usually the best option. But if there is still a spark, and love, and friendship, then it is possible to work things out. In fact, you guys should work things out, since no relationship comes without its fair share of problems. Read on for signs that you should do just that.

1. You Still Feel The Feels

It'll be obvious when a relationship is truly mean to be over. It'll just feel done, and watching your partner waltz out the door will be a relief. But if the thought of losing your SO keeps you up at night, then consider it a sign the love is worth salvaging. As Firstein says, "... if you feel you care and still have positive feelings and there is a genuine commitment on both sides, it is a good idea to try to make things better."

Of course you shouldn't stay in a relationship just because the thought of moving out seems annoying. But having a lot invested in each other should make you take pause. "Kids, pets, property… the more stuff you and your partner share, the more it’s worth it to try to salvage your relationship," Andrew Christensen, Ph.D., told Anna Davies on YourTango.com. After all, there's probably a good reason you guys got that involved in the first place.

3. You're Both Willing To Put In The Work

"In order to work on your relationship, there has to be a strong desire to do so and ability to be open to new ideas and new behaviors," Firstein says. Whether that means long chats every night, or seeing a therapist, it's a good sign if you're both game to make an effort.

4. Breaking Up Is Only Mentioned In Anger

A lot can be said in the heat of the moment, so if one of you dropped the breakup bomb, it may be worth readdressing the issue once things cool off. "Speaking calmly and openly after [a] fight can help you both parse out how you really feel and if the relationship is worth saving," said Davies.

5. Ya'll Are OK With Being Vulnerable

Talking about your issues can be tough, and it won't work if one or both you would rather shut down. So a willingness to talk — even about those painful, scary things — is an absolute must. "There needs to be willingness to take a risk and expose your vulnerability even though you may get hurt again and things may not work out," Firstein says. "If both parties are willing to be vulnerable, there is hope."

6. You Don't Go All-In When Arguing

Sure, you guys might have some pretty hefty arguments (i.e., that aforementioned breakup bomb). But if you see a future with each other, you'll likely hold back from spilling the truly nasty stuff, according to Mélanie Berliet on ThoughtCatalog.com. If your SO is really digging up dirt, however, it may be time to GTFO. Because that's not cool.

7. You Guys Still Have Fun

Life — and relationships — can be stressful. And yet, despite it all, you still enjoy your partner's company. "It doesn’t matter what you’re doing, just being together is enough to have a great time," said lifestyle writer Allison Renner on Lifehack.org. If that's still the case, then leaving wouldn't make much sense.

The moment you guys stop talking is the moment things will end. So as long as communication flows fairly freely, there's hope. "If you and your partner still talk, still share daily occurrences as well as hopes and dreams, then you’re both putting forth the effort that a solid relationship requires," Renner said.

9. You're Ready To Take A Look At Yourself

It can be pretty darn easy to blame your SO for things being so shaky. And sure, maybe they have a lot to do with it. But it's always going to be necessary to look at yourself. "There has to be an honest appraisal of your role," Firstein says. "Then there needs to be a resolve to change and care about what your partner needs from you and realistic appraisal of whether you can do this." If you can, then things may be OK.

10. Problems Have Been Resolved In The Past

If something bad went down in the past, and you guys made it through, then you should have every expectation of making it through again. As long as there's that communication I was talking about, then things will probably be OK.

11. You Still Love Each Other

If your partner is one of your favorite people, then consider it a good sign, according to Renner. You may not like each other right now — especially if you're dealing with stress, or other problems — but you still love each other. If you still want to be around your partner, despite their flaws, then go ahead and give this thing a try.

You'll know when a relationship is worth leaving. So if it isn't inherently obvious, chances are you two should keep on keepin' on.