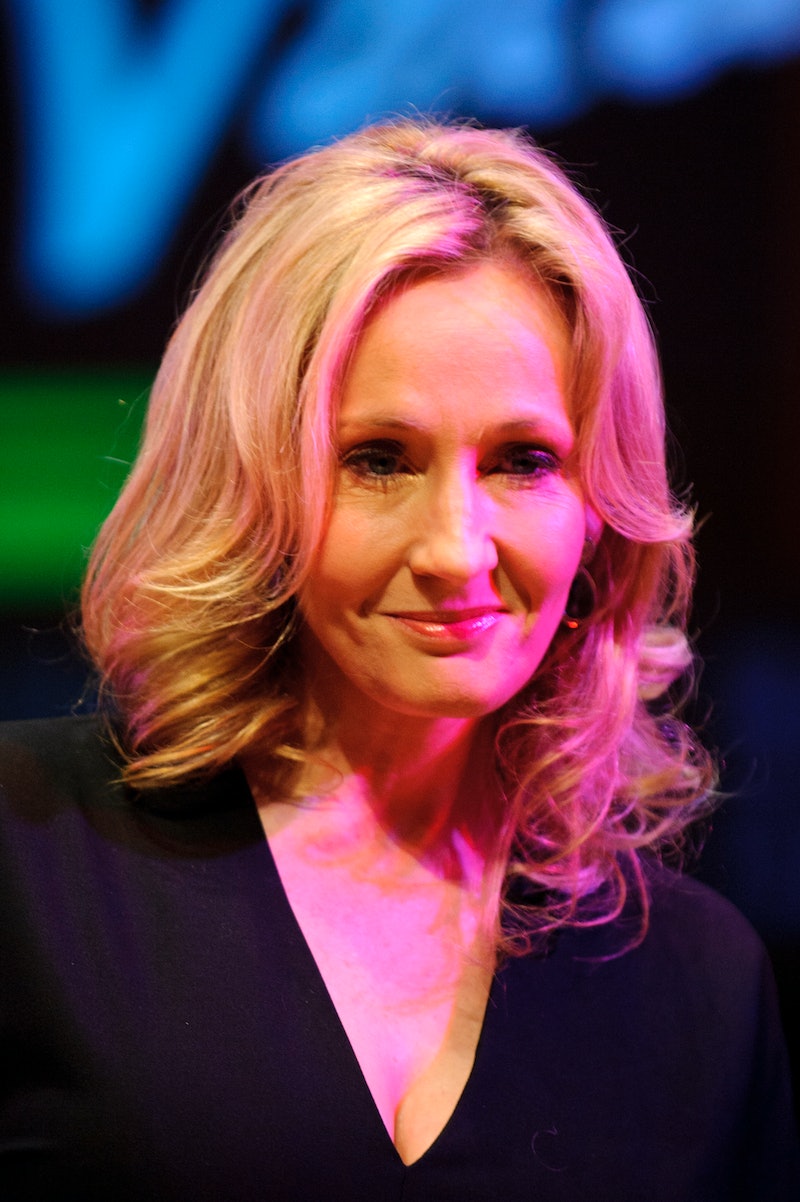 When you think of powerful figures in Hollywood, you probably think of producers, directors, executives, and actors: most of them, unfortunately, men. But in fact, one of the most powerful people in Hollywood is... J.K. Rowling, who just topped The Hollywood Reporter's annual list of 25 most powerful authors. As movie adaptations of books get more and more popular, authors are gaining a ton more power in Hollywood — and this year, according to Howie Sanders, co-head of the book department, "the demand for creators and underlying material has never been stronger."

Even looking at J.K. Rowling's influence alone is impressive: the author has inspired an eight-film blockbuster film franchise, a TV miniseries based on her adult book The Casual Vacancy , an upcoming BBC series based on her Cormoran Strike detective novels, the hit West End play The Cursed Child which has hoards of people clamoring for a movie version every day, and the upcoming Fantastic Beasts trilogy, the first of which hits cinemas this November. Wow, I got out of breath just typing that sentence. When it comes to Hollywood, there's no denying it: J.K. Rowling has some serious power.

But she's not the only badass female author on this list; in fact, women make up 10 of the 25 most powerful authors of the year.

At number 5 on the list is E.L. James, creator of the Fifty Shades phenomenon which, love it or hate it, has made some serious waves in Hollywood. After the trailer for Darker , the latest movie adaptation of one of her books, broke the worldwide record for most-viewed trailer within its first 24 hours, James said this should be "a wake-up call to filmmakers that there is a vibrant, fervent community of women that is underserved by Hollywood at the moment when it comes to commercial, sexy love stories."

At number 11, you'll find the dark and mysterious Gillian Flynn, who had us all captivated with Gone Girl — first in novel form, and then again when she rewrote it as a screenplay for the film starring Rosamund Pike and Ben Affleck. As well as writing adaptations of her own deeply scary novels, Flynn has also been working on some high-profile projects like the screenplay for Steve McQueen's next film Heist, and the HBO series Utopia.

Diana Gabaldon made the list at number 14, due to the outstanding success of the Outlander TV series based on her popular books, and Margaret Atwood popped up at number 16, as two of her bestselling novels are being adapted into TV shows: The Handmaid's Tale and Alias Grace.

Liane Moriarty has had two of her novels optioned by power duo Reese Witherspoon and Nicole Kidman — which is a big enough deal to bring her to number 18 on the list. Apparently, Moriarty said to Kidman, "I know you’re not supposed to get too excited until the day shooting actually starts.” She must have been thrilled when Kidman replied, "No, no — if we option it, get excited.”

The adaptation of Paula Hawkins' The Girl on the Train is set to be one of the smash hits of the year, so it's no surprise that Hawkins appears on the list at number 19, and the incredible success of Room, based on Emma Donoghue's novel, has led to an abundance of other Hollywood offers for the Irish-Canadian author, who you'll find at number 22.

And at places 23 and 25 respectively, look out for Lauren Oliver and Maria Semple. Oliver's first book, Before I Fall, is set to hit the big screen in April next year, and none other than Richard Linklater himself is set to direct the upcoming adaptation of Semple's Where'd You Go, Bernadette?

Seeing such influential women making up such a large chunk of this list has me feeling super-inspired to go and create something of my own. Fingers crossed, hopefully we'll see women making at least half of that list. It's also impossible to ignore the total lack of people of color listed here, showing quite how far we still have to come in terms of diversity in Hollywood.