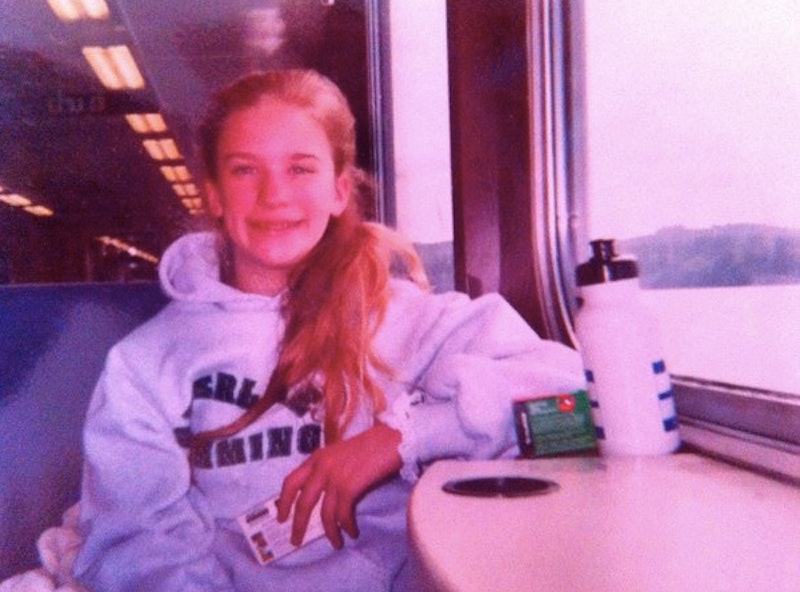 Like many Americans, I didn't know very much about Republican presidential nominee Donald Trump before this election cycle, and initially considered his presidential campaign nothing more than a joke. And like many Americans, I have come to know Trump very well in the months since he won his party's nomination and proved himself to be both shameless and ignorant in his constant public xenophobic, sexist, and all-around offensive comments. But over the past week, when Trump's comments criticizing women's bodies took center stage, I was forced to admit that Donald Trump has a lot in common with me at 12 years old — the year I struggled with an eating disorder.

Trump's history of making derogatory comments about women's bodies has come up many times during this election cycle: He publicly attacked former Miss Universe Alicia Machado on Twitter, responding to her claims that he called her "Miss Piggy" and "Miss Housekeeping" and fat-shamed her throughout her reign by calling her "disgusting," among other things, in a late-night tweet rant. In 2013, he criticized Kim Kardashian by saying, "Does she have a good body? No … Does she have a fat ass? Absolutely. And if it weren’t Kim, they’d say, ‘Wow, I don’t want to go out with her.’" In 2006, he came after Rosie O'Donnell, saying, "I’d look her right in that fat, ugly face of hers and say, ‘Rosie, you’re fired.’ … We’re all a little chubby, but Rosie’s just worse than most of us.”

There isn't a single person I know who isn't stunned by the casual nature of Trump's archaic, awful comments. But I think there are times that I hear Trump's comments through a lens that some of my friends don't — because there are very few things that he has said about these women that I didn't once say to myself.

Former Miss Universe Alicia Machado stepped forward in an appearance on the Today show on Sept. 28, saying that Trump's comments were what instigated her eating disorder in 1996, as well as her troubled relationship with food in all the years that followed. I don't have to imagine what that was like for her, because I — like countless other women — have endured the same.

"Suck in your gut. Suck in your stomach," Former Miss Australia Jodie Seal says Trump told her while she competed in Miss Universe. In the mirror in my childhood bedroom, 13 years ago, I told myself the same thing.

It wasn't Trump's voice I was hearing in back in 2004, but my own pint-sized, prepubescent one. I couldn't tell you how the idea to starve myself got planted in my kid brain; it's been too many years, and I am too many miles away from the person I was back then. But what I will never forget are the words that I used to hear every time I looked in a mirror — and even if I could forget them, Trump's comments would remind me every time.

I was never stupid enough to say things like that out loud, never stupid enough to give the game away. Like most people with eating disorders, I was determined not to let anybody know what I was doing. But now all these years later, I am stunned to hear those words every day. More terrifyingly, I hear them from a man who wants to be this nation's president. A president who would have the power to set standards for behavior on a global scale, and have a platform to make these body-shaming comments more visible and damaging than they have ever been. We already live in a world where eating disorder self-talk is pervasive and scarring — can you even imagine if someone that visible were given the power to normalize it? If the next generation of 12-year-old girls didn't just suspect that their worst insecurities were realities, but were living in a country led by a man who thoughtlessly speaks to every one of them?

No, Trump didn't give me an eating disorder. But a culture that stands silently and lets the Trumps of the world sound off about women did.

At that age I used to cry myself to sleep thinking I'd never get over it, never be "normal". That I'd never eat a few bites of cake without staying up all night, compulsively checking my stomach with my open palm: Am I bad? It took a long time to pull myself out of it, and even longer to understand that I was a product of a culture that led me to believe that I could achieve worth through thinness.

There are parts of my past eating disorder that I'm still coming to understand, even as an adult, but this I do know: Trump is that culture. Trump is that perpetuation of harmful, insidious beauty ideals that led girls like me to cry in dressing room mirrors, to hide during family dinners, to think so obsessively about one thing and one thing only that the rest of our lives — our ambitions, our relationships, the things that actually defined us — all but faded completely from our minds. No, Trump didn't give me an eating disorder. But a culture that stands silently and lets the Trumps of the world sound off about women did.

I'm 25 now. I'm happy, healthy, and work for a site where we proudly advocate body- and fat-positivity, surrounded by peers who make me feel good about myself. It's rare that I even think about the eating disorder I once had, but for that I consider myself lucky; I know that there are far too many women who never get to feel that way.

When it comes to Trump's comments, though, it doesn't matter whether you've recovered from an eating disorder, still in recovery, or in the throes of one right now. You still recognize the words that come out of his mouth, because they were the manifestation of everything you feared: that you were not worthy. That you could be summed up by the whole of your parts, and that somehow, inexplicably, those parts had failed. That despite the assurances of your parents, your doctor, and everyone who saw you floundering and tried to help you, the world was the exact nightmare that you imagined it to be.

Until now, I have never talked openly about the eating disorder I had 13 years ago, because I did everything I could to forget that girl I once was. But every day, I still hear her speak through Donald Trump's lips.

The next time he shames a woman's body, I hope we are louder than he is.