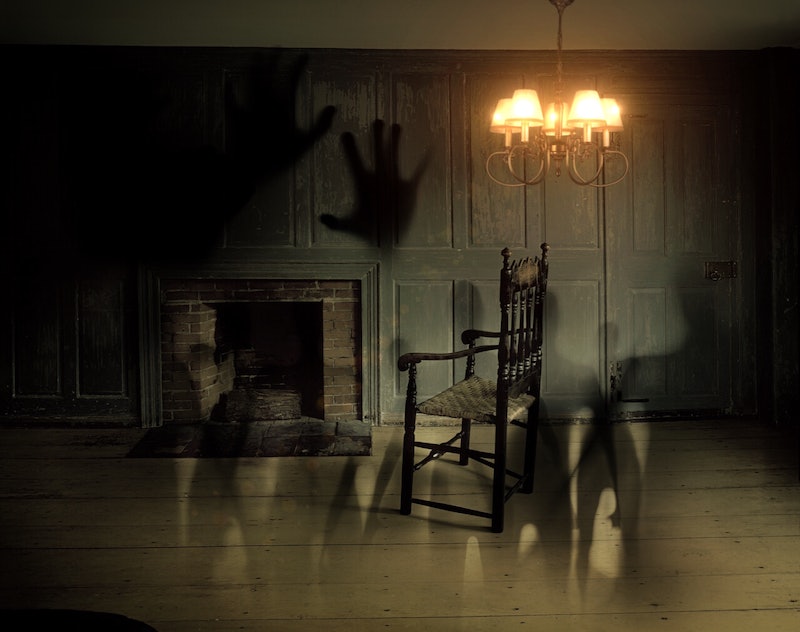 As far as I’m concerned, it’s always a good time to listen to creepy podcasts — but there are two times when it’s absolutely the best: Late at night, and during the Halloween season. So, since we’re currently in the all-too-brief part of the year where it’s possible to experience both of those situations simultaneously… well, now seems like a good time to put a few new things in ye olde podcast queue, doesn’t it?

The podcasts listed here fall under two headings: Things I Listen To Regularly And Adore, and Things I Definitely Have To Listen To Soon Because They Sound Awesome. You’ll also notice that I’ve steered clear of some well-known favorites: The NoSleep Podcast, The Black Tapes Podcast, Welcome to Night Vale, We’re Alive, and Knifepoint Horror are all absent here. This isn’t because I don’t like them; on the contrary — they’re some of my favorites. But since we’ve already examined those particular picks in previous posts here on Bustle, I figured I’d avoid retreading old ground and focus on some others we haven’t already discussed.

To be fair, I actually don’t do most of my podcast listening late at night; I do it at the gym right after work, because I get bored easily and would probably stop going to the gym entirely if I did not have something interesting to occupy me while I’m on the elliptical. But I suspect that one of the reasons I like listening specifically to spooky podcasts at times that are not late at night is because I like the way late-at-night feels. These podcasts put me into that mindset, and it’s a deliciously shivery place to be.

So if you, too, enjoy the weirdness of the late-at-night, take a listen to the eight picks below — no matter what time of day it actually is.

If you’re a fan of The Black Tapes Podcast, you might think about picking up Tanis next. It’s a little harder to pin down than Black Tapes in terms of what it's actually about; it centers around Nic Silver’s quest to find out exactly where — and what — a myth known as “Tanis” is. But while the Tanis myth itself may be fictional (yes, it was an ancient city in Egypt, but the rest of the myth as explored in the podcast is made up), what’s the most fun about the podcast is the way it weaves in unexplained phenomena (think things like the Markovian Parallax Denigrate), weird web culture (the Elevator Game, for example), and odd bits of history (Jack Parsons) from real life. The lines blur a lot in Tanis, and it’s a fascinating, if somewhat confusing, ride.

Some creepy stories and urban legends are clearly fictional — but a lot of them have their roots in something very real. These roots are what Lore explores, and you guys? Spooky history is the best. Sometimes creator Aaron Mahnke explores specific people, places, things, or incidents; think Countess Elizabeth Bathory, Robert the Doll, or the Hinterkaifeck murders. Sometimes, though, he explores the common themes that run throughout folklore, often appearing in a variety of different cultures and at different points in time — the weirdness of Santa Claus, for example (because let’s face it: Santa is weird. It’s time we squared with that fact).

One of the most delightful things about Welcome to Night Vale is how it manages to be both freaky and funny at the same time. But I also think there’s something to be said for something just being straight-up freaky, and it turns out that the folks behind Night Vale can do that, too: Their second podcast, Alice Isn’t Dead, has all the otherworldly weirdness of Night Vale minus the humor, which makes it that much scarier. It centers around a woman who learns that her wife may not be as dead as she thought she was and subsequently sets out on a road trip to find her. Think of it as what might happen if you crossed Twin Peaks with American Gods and made it into a radio show.

Do you spend your spare time falling down the Wikipedia black hole that is the List Of People Who Disappeared Mysteriously? Then Limetown is just waiting for you to queue it up. It starts with a Blair Witch Project-esque tagline — “10 years ago, 300 men, women, and children disappeared from a small town in Tennessee, never to be heard from again. In this seven-part podcast, American Public Radio host Lia Haddock asks the question once more, ‘What happened to the people of Limetown?’” — and although I think its pacing is a little too quick in the beginning, it remains engrossing throughout. It’s fictional, of course, just like The Black Tapes; it’s an effective use of the same genre, though, so it’s well worth a listen.

The creators say there’s going to be a second season eventually, so fingers crossed it comes to fruition at some point — but they’ve also got a lot of other related projects in the pipeline, so whatever happens, it seems there will be plenty to look forward to.

The Message is short — just eight episodes, each around 15 minutes long — but it’s so engrossing, you’ll wish there was more to listen to. At the same time, it’s exactly as long as it needs to be, so… what I’m trying to say is that it’s terrific.

Like Black Tapes, Tanis, and Limetown, The Message is a fictional story framed as a piece of investigative journalism in the same vein as the real-life hit Serial. If you’re fascinated by things like the “Wow!” signal, you’ll probably dig this particular story; it follows a podcaster named Nicky Tomalin as she documents a research group’s attempts to decode a message received from space decades ago. But then — as you might have guessed — things start to go… a little bit wrong. The Message is minimalist sci-fi horror at its best.

Here’s where we move from podcasts I know and love to podcasts that I currently have waiting on my Things I Definitely Have To Listen To Soon Because They Sound Awesome list. In case you couldn’t tell, I have a thing for the “fictional scripted investigative journalism” podcast genre, because guess what? Archive 81 looks like it’s another one of those. Its description on its website reads only, “Three months ago, Daniel Powell vanished. These are the tapes he sent me”; the corresponding Facebook page adds, “A city, a story, and an unimaginable evil.” To which I say, yes please.

Chatter around the web reveals a little more — Daniel vanished while working on a government project and the podcast is his best pal’s attempt to draw attention to get the word out and get to the bottom of it — but really, there’s already plenty there to pique my interest.

Vanessa Lowe’s Nocturne isn’t about the normal trappings of night: fear, the unknown, or even fear of the unknown. Rather, it’s a celebration of those strange relations we form with the time between dusk and dawn. So far in the show’s short run we’ve heard stories from a visual artist, a bread baker, a science writer, and a truck driver, each with their own stories and each with their own lesson learned from their encounters.

As such, it might not be as overtly creepy as some of the other podcasts on this list — but there’s a particular air of creepiness that always hovers around things pertaining to the night, so I suspect it will still fit the bill. I’d also bet that people who listen to Everything Is Stories will probably also appreciate Nocturne.

I know I’ve already referenced Twin Peaks in this list, but I feel like Small Town Horror will hit all the right buttons for devotees of David Lynch’s wonderfully weird cult classic. This one takes place in the Midwest, rather than the Pacific Northwest — its setting is the fictional town of Crayton, Minnesota — but like Twin Peaks, Washington, Crayton definitely has its secrets. There might be a few similarities between this one and Archive 81, too; from what I gather, Small Town Horror also involves some mysterious video tapes and a number of strange occurrences. There seems to be a lot going on here, and I can’t wait to try to get to the bottom of it.

More like this
Everything To Know About 'Evil' Season 4
By Meguire Hennes
25 Things I've Reduced My Life To, In Addition To WFH In My PJs
By Ginny Hogan
The Spiritual Meaning Of The August 2022 New Moon
By Nina Kahn
Your Daily Horoscope For August 12, 2022
By Mecca Woods
Get Even More From Bustle — Sign Up For The Newsletter