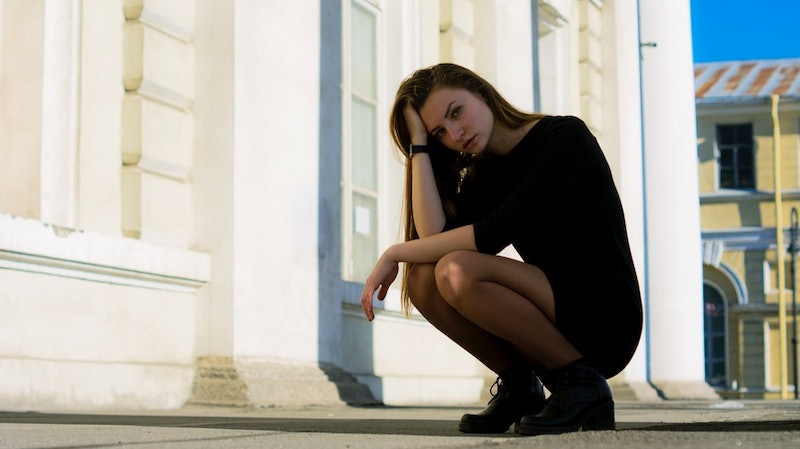 I don't know about you, but I certainly don't wake up in the morning hellbent on creating drama in my life. I want things to go smoothly, just as much as the next gal. And yet, I swear drama occasionally follows me around. I'll go through bouts of misplaced keys, magically spilled coffee, and misunderstandings with friends. The list goes on and on, and it can get annoying.

I know I'm not alone in this, mostly because I hear tons of people complaining about the same thing. They say they're cursed, or have horrible luck, or can't seem to do anything right. So for everyone out there dealing with dramatic lives, let me assure you — it often has nothing to do with you. "Life has a certain amount of natural drama and ups and downs," says Dr. Paulette Sherman, psychologist and author of The Book of Sacred Bath s , in an email to Bustle. This is the the ebb and flow of life, where some days go smoothly and some don't. No big deal.

But there do exist some people who accidentally create drama in their lives, to the point where it becomes a longstanding problem. "This causes problems because it's stressful not only for that person but for people around them," Sherman says. Whether you subconsciously love the attention, inadvertantly sabotage yourself, or simply don't know any better, you likely have bad habits that keep that drama coming back for more. Read on for some interesting ways that just might be the case.

1. You Tell Your Friends Everything

When you're stressed, it can be tempting to share all your worries, and vent to friends in vivid detail. But blurting everything out only creates more drama, according to spiritual coach Heather Kristian Strang. She tells me it's much better to sit quietly with your thoughts, meditate, journal, or meet up with a therapist. These tactics are often a more effective (read: less dramatic) way of dealing with stress.

2. You Start Convos With Gossip

If you're out at a bar, or standing around at work, one way to get a convo rolling is by dropping some gossip. It may not feel like a big deal, but before long everyone is talking about that girl from high school or something a coworker said. (Oops.) If you do this on the regular, Sherman tells me it could be that you like to be "in the know" or that you enjoy the attention. Sound about right? Then it may explain why drama follows wherever you go.

Think about how dramatic life feels when you burst into work twenty minutes late. You're sweaty, frazzled, and have coffee spilled down your shirt. (Not cool.) Now, imagine a life where you show up five minutes early. Pretty drama-free, right? Being on time is clearly the way to go, especially since lateness can affect other people, Sherman tells me. You not only keep them waiting, but can mess up their schedule by running behind. That's doubling the drama, and it's not OK.

4. You Stir The Pot When You're Bored

Just like gossiping, creating drama when you're bored is something you probably do without thinking. If so, you might notice how something bad inevitably happens whenever you have too much time on your hands. "It’s almost as if we strive for peace and happiness, yet when we’re living it, it’s not enough," said holistic life coach Nicole Leigh West on HuffingtonPost.com. You might text an ex one quiet evening, or try to spice up a lazy afternoon by picking fights on Facebook. It feels innocent in the moment, but it most definitely creates drama.

5. You Aren't The Best At Communicating

If you never say what you're thinking, or expect people to read your mind, it can really lead to a dramatic life. According to relationship expert Lori Deschene on her website TinyBuddha.com, the drama comes from the resulting confusion. This can show up in the form of cyclical arguments with your SO, or constant misunderstandings at work — all of which could be avoided if you spoke your mind.

6. You Let Your Temper Slip

Big arguments are obviously dramatic. But think about all the times you let an angry comment slip, or muttered something rude under your breath. You "can cause drama by having impulsive verbal arguments in the car or even at dinner without intending to, because [you] cannot self soothe or reign [yourself] in," Sherman says. While everyone's entitled to the occasional bad mood, having lots of mini temper tantrums can create an environment that breeds drama.

7. You Hang With Dramatic Friends

If your friend group is constantly having reality TV-esque throw downs, then a dramatic life shouldn't be that surprising. But drama can still arise, even with friends who are decidedly more calm. Take your best friend, for example. She calls at 2 a.m. because she's upset, or she broke up with her boyfriend again. While that's tolerable for some people, it might be a bit too much for you. If so, "give yourself a window of time when you’ll listen, and then take care of your own needs by walking away," Deschene suggested. "Oftentimes people calm themselves down when other people don’t validate their complaints."

8. You Say All Sorts Of Things While Drunk

Drinking can cause a bit of of drama, Sherman tells me. While not as likely if you're simply out with friends, problems can arise if you get tipsy at a work party, or while out with your in-laws. It's not the end of the world, but it could be a pattern worth noticing.

I understand the desire to ask your friends and family for advice. Personally, I chat with my mom about everything. But there is something to be said about following your own intuition. When you don't, you are "making decisions that are not in true alignment with ... who you really are," Strang says. This can lead to following advice that isn't actually good for you, or making decisions based on someone else's agenda. And that's not a good way to live.

10. You Don't Face Your Problems

In the same way you might stir up drams when you're bored, it's also possible that you create a bit of chaos to distract from other underlying problems — like a bad relationship, stress, or depression. "Drama can channel energy away from what you really need to be focusing on," said Cherilynn Veland, LCSW, MSW, on Blogs.PsychCentral.com. "Not unlike watching TV instead of cleaning your house." Pretty eye-opening, right?

11. You Are Copying Old Habits

Did you grow up in a dramatic family? If so, then it could be you simply don't know any other way to be. When stress arises, you meet it in the most dramatic way possible, because that's what your parents always did. "We are drawn to what we know," said Veland. "It is not unusual for people to find themselves in these emotionally loaded scenarios again and again because they are drawn back into this old stuff." If this is so you, try to break the cycle by trying something, anything, different.

You just might find that your life gets a helluva lot less dramatic. And that's a good thing.