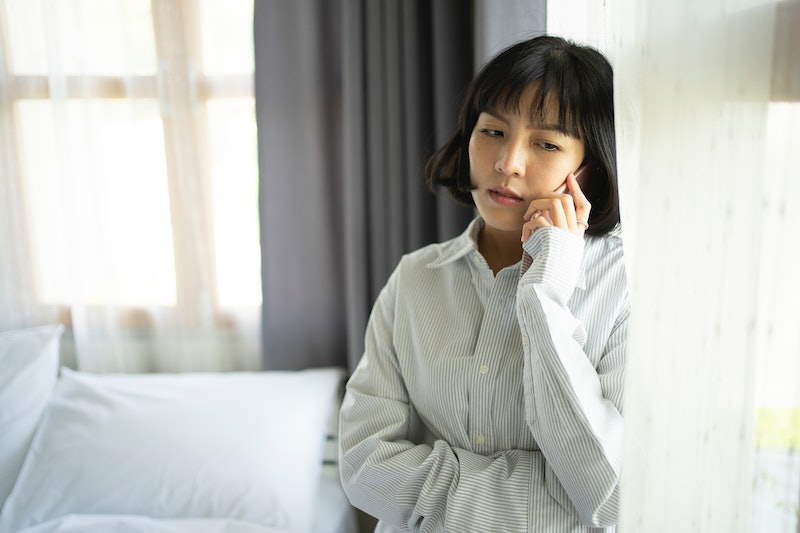 If you're a woman, then you probably already know from personal experience that being in a relationship won't protect you from frequently experiencing street harassment, judgement about your lifestyle, negative comments about your looks, unsolicited advice about your fertility, or sexism at work. The fact is, single or not, women are constantly being told that they should smile more, dress differently, be less intimidating, settle down, or avoid doing anything even remotely dangerous without a companion. That said, I think we can all agree the creepy things people say to single women — or even just unmarried women — are often more inappropriate and intrusive than the weird things people say to women in long-term relationships.

Personally, I'm more T-Swift than Ilana Wexler when it comes to sex and relationships, so I really haven't spent that much of my adult life as a single lady. Even so, I did spend the past year single, and I'm no stranger to the figurative downpour of creepy comments that single women hear on a regular basis. In fact, even now, unless my dude is physically with me when I go places, pretty much everyone I come into contact with treats me like I'm single because I'm not wearing a wedding band — and it's not always a pleasant experience.

Here are just a few of the creepy things I've heard as a single woman, and why they're total bullsh*t.

"How long has it been for you?"

I wish I could say I've only heard this question coming from my best friends and gynecologists, but unfortunately, I cannot. For whatever reason, the majority of people seem to think this is an acceptable question to ask of single women, (and perhaps just single people in general) — but it really couldn't be more personal or inappropriate. Whether they're referring to your last date or your last sexual experience, this just isn't an OK question to ask anyone. Don't hesitate to call out the next person who asks you this. It's a creepy thing to say, and they should know that.

"Don't you ever get scared living all alone?"

I understand that this question typically comes from a place of genuine concern, but that doesn't make it any less creepy, sexist, patronizing, or unnecessary. Questions like these insinuate that women living alone are a horror movie waiting to happen, which is creepy as all hell — but this question also suggests that women need a protector of sorts to live successfully, and that's just total crap.

In fact, 54 percent of women were living independently in 2013 — compared to just 46 percent of men — so living alone as a single woman is actually the norm these days. Moreover, not only do the majority of single women live alone, but women who live by themselves are also reportedly more successful than women who choose not to live alone and men who do opt to live by themselves. Thirty-eight percent of women living independently in 2013 had a professional job, but only 28 percent of women living with others and 24 percent of men living solo could say the same thing. On top of all that, thanks to things like home security systems, dogs that bark, locks on doors, and being a legal adult, there's absolutely no reason for women to fear living alone. This question couldn't be more bogus, and everyone needs to stop asking it.

"Guys must be after you all the time."

While I think this is generally meant to be taken as a compliment, it always leaves me feeling super creeped out — mainly because the wording of this phrase is so threatening. This comment does a disservice to men as well, because it paints all single men as these aggressive, sex-crazed weirdos that will stop at nothing to bed all single ladies in their general vicinity.

"Aren't you nervous to travel by yourself?"

Speaking as a woman who has traveled solo in the United States and abroad regardless of my relationship status, I can tell you from personal experience that women get asked this question pretty much any time they travel alone. It's a creepy question to ask because it insinuates that women are never truly safe unless they're with other people — a sentiment that infantilizes women and perpetuates rape culture simultaneously. As long as this kind of thinking persists in our society, women will continue to fear being targeted while traveling solo — but if you do it mindfully, traveling alone as a woman is perfectly safe.

"You know, women lose most of their eggs in their 30s."

Yes, fertility does decline in women by their mid-30s, so this statement isn't completely incorrect. It is, however, a super messed-up thing to say to single women for a number of reasons. First off, giving anyone unsolicited advice about their reproductive organs is creepy, and I don't know why that's so difficult for the majority of people to understand. Secondly, an increasing number of single women don't want to have kids — ever. The number of U.S. women forgoing motherhood has doubled since 1970, making questions like this hit the trifecta of creepy, offensive, and pointless.

"If I were single, I'd totally try to get with you."

Aside from the times my lady friends have said this to me in jest, this comment — which is pretty much always unsolicited in my experience — has always seemed creepy to me. It suggests that single women will take anyone who will have them, when in reality, most single women are unattached by choice. I've seen queer girls say this to the single lesbians that they meet, and I've heard dudes with girlfriends say it to me on more than occasion. In both situations, this comment only succeeded in weirding out its recipients. So let's just stop saying it, OK?