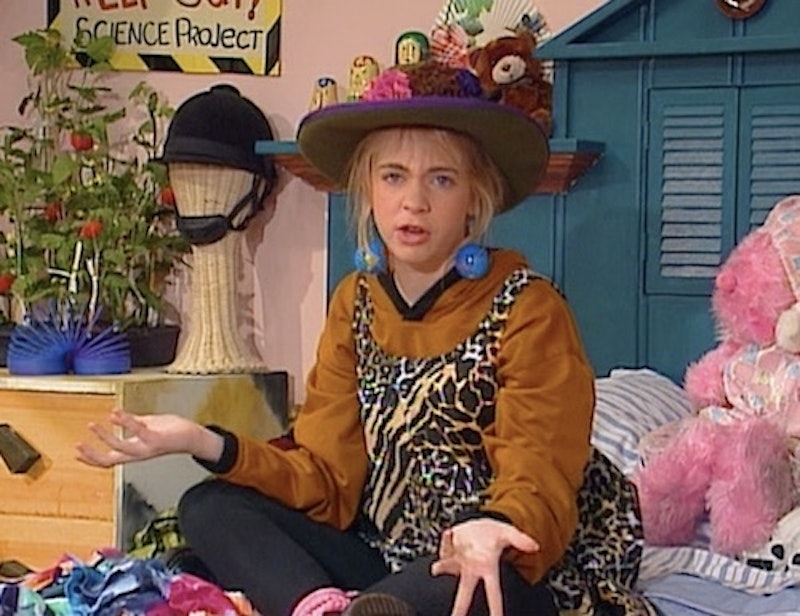 The '90s were a fun time... you know, except for when they weren't. The problem was there were so many fun things to do that fell outside of what our parental units considered appropriate (what, like you never got caught drooling over the Abercrombie & Fitch catalog?) that we spent a fair amount of time in trouble. Fortunately, when '90s kids were grounded, there were still a number of mildly enjoyable ways to pass the time. After all, we were nothing if not resourceful; when the going got tough and we couldn't get going to the mall, we whiled away our restriction in our rooms.

In full disclosure, most of my '90s-era restriction was the result of boys. Either I broke my internet curfew flirting with a crush on AIM, or I got caught canoodling with my boyfriend when I was supposed to be "studying." Whatever, I was a raging ball of adolescent hormones and I still contend that shouldn't have been held against me. Still, I became pretty adept at finding ways to entertain myself during the prolonged periods of time all of my extracurriculars were halted by the 'rents.

Fellow '90s kids, join me in remembering those stagnant days hunkered down in our rooms just waiting for our punishment to pass. They were filled with things like:

Your mom may have absconded your copy of the Abercrombie & Fitch catalog, but at least she left your new dELiA*s alone. That gave you ample time to circle all the things you imagined telling your parents they were going to have to buy you to make up for your solitary confinement.

2. Actually Tending to Your Tamagotchi

When you weren't on restriction and your social life was poppin', your poor Tamatochi always seemed to poop itself to death. But when you were holed up in your room for hours (more like days) on end, you had plenty of time to feed your cute little alien and scoop his virtual poop.

How else were you going to passively aggressively piss off your parents than by playing songs like "Stupid Girl" by Garbage and "Bullet with Butterfly Wings" by Smashing Pumpkins?

Despite your best efforts, even hours of practice while grounded did not render a perfectly crimped coif a la Madison from Splash. Oh, well... there was always next restriction to master your technique!

You had a lot of time to dwell on the future while dying a slow social death in isolation, so you had to turn to the cosmic '90s gods for guidance. This looked a lot like playing M.A.S.H., fiddling with a "cootie catcher," shaking a Magic 8 Ball, and even breaking out the Ouija board.

5. Writing Angsty Notes to Give Your BFF

You couldn't very well talk on the phone, because your mom could pick up at any minute and you'd be busted all over again. So you had to scribble your rage on loose leaf paper that you'd fold into intricate origami-like shapes before passing to your bestie the next morning in homeroom.

Sure, your parental units took away your phone, computer privileges, and probably your Nintendo, too. What they failed to realize, though, was they didn't grab your Game Boy. And, really, if ever there was a game designed to be played by grounded kids, it was Tetris.

8. Trying on Everything in Your Closet

Hey, you were too timid to try all the new fads at school, so being grounded gave you the perfect excuse to pile 'em on and pretend you were Tyra Banks, strutting down the hallway like it was a catwalk.

9. Painting Your Nails, Probably with White-Out

When boredom really began setting in, painting your nails at least gave you something to do with your hands. If you were feeling particularly goth, you might have gone for a jet black. Personally, I was a big fan of Hard Candy "Sky." However, I wasn't above shellacking my digits with a crusty coat of white-out if I didn't have any nail polish squirreled away in my room.

The quickest way to escape the social purgatory of restriction was to bury your nose in a book. You'd just kick back, crack open your dogeared copy of your favorite Baby-Sitters Club book, and let the zany shenanigans of Kristy Thomas and the gang transport you.