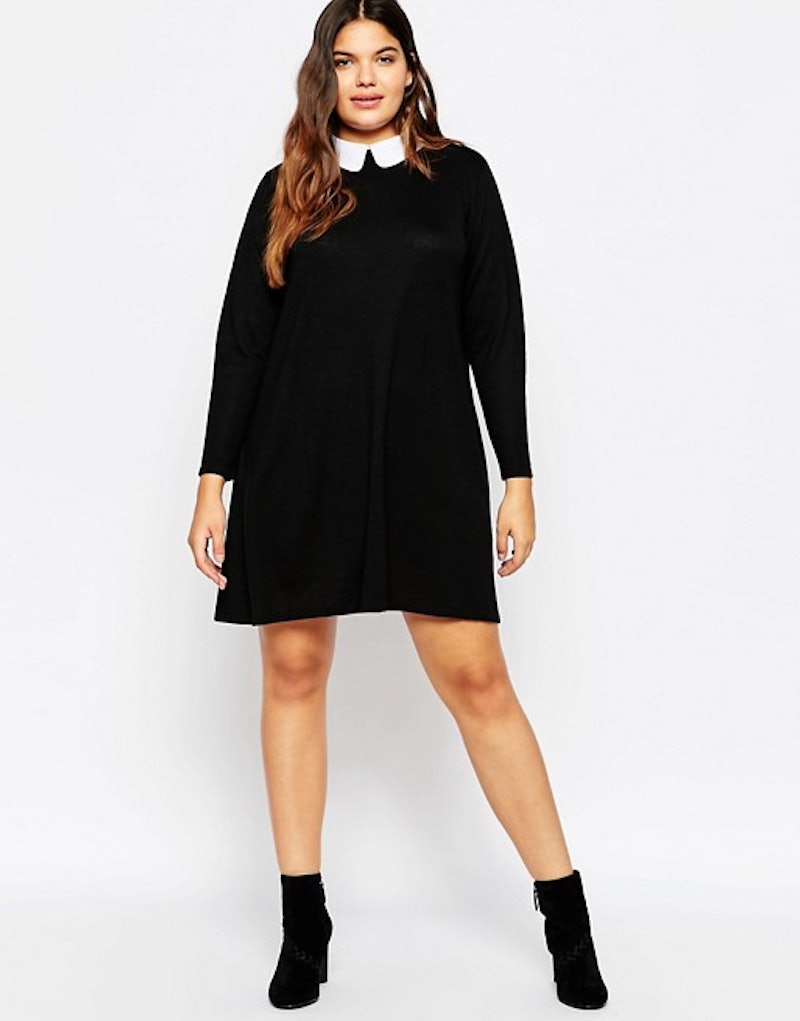 Halloween flashes by in a riot of colorful costumes, face paint, and fake blood, so people who enjoy wearing head-to-toe black might feel a bit out of their depth come All Hallow’s Eve. Therefore, you may be looking for some all black halloween costumes so that you can stay firmly in your comfort zone, while still being a part of the festivities. Because nobody likes a party pooper.

Just because you're not into colorful clothes doesn’t mean you have to miss out on all the fun. In fact, some of the most classic Halloween costumes of all time involve wearing a pitch black ensemble — think cats, vampires, and witches. Besides, you shouldn’t have to water down your personal style in an effort to fit in during Halloween.

Having an entirely black wardrobe doesn’t automatically mean you have to dress up as a “goth” either. Of course, goth girl style is still as trendy as ever and pays homage to the loveable ‘90s trend, but black garments can be super chic too.

There are actually a ton of benefits to wearing all black outfits in everyday life and on Halloween: All of your clothes automatically match, black clothes never go out of style, if you spill something on them it’s easier to disguise, and if you get a little hot and bothered they don’t tend to show sweat patches too. So, here are some rad, all black Halloween costumes that you can probably pull from your colorless wardrobe.

Morticia Addams is basically the queen of all black attire — she's like a witchy Dita von Teese and she sure knows how to tread the line between vixen-like vamp and ethereal empress.

For a Morticia costume, you'll need white face paint, smoky eye makeup, plus a dress that brings to mind visions of Jessica Rabbit at a funeral. A pair of blood red lips will be the last nail in the coffin of this ensemble.

An adorable Wednesday costume is perfect for Addams family fans who want to wear something a little more modest.

Pick out a dress with a cute Peter Pan collar, or wear your fave LBD with a shirt underneath for easy Wednesday Addams vibes. Don't forget your pigtails!

Instead of opting for the classic cat costume for Halloween, make things a little darker by choosing to embody Michelle Pfeiffer's depiction of Catwoman in Tim Burton's '90s movie Batman Returns .

One cannot become Catwoman without a catsuit! Go for a sleek leather look with sky-high platforms.

Lydia Deetz wore a variety of black garments throughout Beetlejuice , so you can get away with any black dress, plus a cape if you have one.

For Lydia's costume it's all about the details, so carry around this cool camera and capture fun pics of your friends throughout the evening.

Separate out your bangs like Ms. Deetz, apply some white face paint, and add a wide-brimmed black hat as a finishing touch.

If you're a huge anime fan, who's super into cosplaying, but you love wearing black, you may feel like you've hit a brick wall. However, you might have overlooked Black Lady from Sailor Moon, who looks evil yet elegant in a flowing black gown.

This decadent dress with see-through sleeves is the ideal garment for such a sophisticated villainess.

If you really want to push the boat out, you can purchase this epic pink wig for some major cosplay brownie points.

If you're the kind of gal who likes to keep it real instead of playing dress up, a Posh Spice costume might be more your cup of tea.

Thus, a black, utterly '90s style mini dress will form the bulk of your costume.

As it's Halloween, you may fancy embracing your dark side, like Death Eater Bellatrix Lestrange.

Pair a witchy, preferably cold-shouldered black dress, with some lace up boots and carry around a Harry Potter inspired makeup brush wand. Because bad gals like to look spellbinding too you know!

Alternatively, if you're a huge Harry Potter fan, but you've not quite decided where your loyalties lie, you can sport a Hogwarts cape while you decide what kind of witch or wizard you want to be when you grow up.

One Size Fits Most

You can literally wear whatever you want under your robe ~cheeky!~ but if you want to keep it authentic, pair your robe with a white shirt, a Hogwarts House tie, and black bottoms of your choice.

If sass is the aim of your game on Halloween, you obviously need to be Sandy post-makeover.

To make your Grease dreams come true, pair an off-the-shoulder jumpsuit with your favorite biker jacket and some killer heels and you're good to go.

Prepare for battle as Katniss Everdeen as you ready yourself for a trick-or-treating session.

A sporty black bodysuit, a toy bow and arrow, plus a braid are all you need to metamorphose into the Mockingjay.

Everyone will be dressing up as Harley Quinn this year, so go against the grain and pick a different Suicide Squad femme fatale instead.

If you're attending a warm, indoor Halloween party this year and want to go as Enchantress, wear a metallic and black bikini underneath this sheer slip for some majorly mystical vibes. Don't forget to DIY your moon headpiece!

You don't have to succumb to rainbows, bows, and glitter if that's not your style. Just pick your favorite character and raid your wardrobe to have a delightfully dark Halloween!