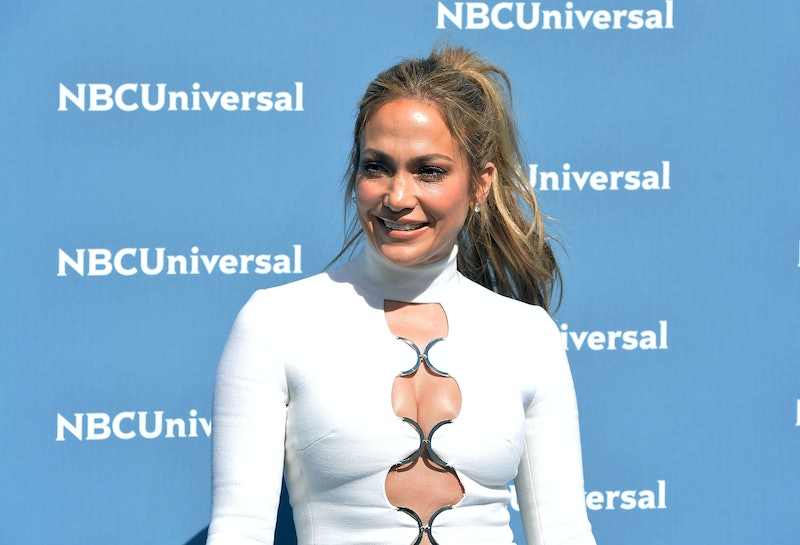 Hairspray Live! hasn't even aired yet, but NBC already announced their 2017 musical. As Entertainment Weekly reported, the next NBC live musical is Bye Bye Birdie, and what makes this news truly exciting is that Jennifer Lopez is in the cast. Lopez is already starring on NBC's Shades of Blue, but her involvement in the network's annual live telecast musical is still pretty surprising — as in, crazy-good surprising. This superstar has the talent to tackle the role of Rosie Alvarez and this announcement is going to make it hard to wait until next holiday season to see Lopez in Bye Bye Birdie Live.

Although these live musicals have drawn major celebrities over the years, like Carrie Underwood in Sound of Music, Christopher Walken in Peter Pan, Queen Latifah in The Wiz, and Ariana Grande in the upcoming Hairspray , Lopez is one of the biggest stars in the celebrity stratosphere. Yet star power aside, she also has the chops to portray this 1950s leading lady.

If you aren't familiar with Bye Bye Birdie, Rosie is the frustrated girlfriend of the music agent Albert, who represents the Elvis-like singer Conrad Birdie. Rosie's role requires singing, dancing, and acting, and Lopez is certainly a triple threat. Plus, Lopez is passionate about the project since, according to NBC Entertainment chairman Bob Greenblatt, she wanted to play this part. "It was her idea to take on this classic singing and dancing role made famous by the legendary Chita Rivera, and we are so happy to oblige," EW reported Greenblatt said in a statement.

Another reason Lopez's casting is so perfect? The role of Rosie is intended for a Hispanic woman. As EW noted, Rivera was in the original Broadway production, but for the film version, Janet Leigh was cast. That meant eliminating the song "Spanish Rose" from the movie, which discusses Rosie's frustrations with Albert's mom's prejudices toward her — even though she was born in America.

Both Rivera and Lopez have Puerto Rican roots, so in a time when the entertainment industry is getting some well-earned backlash for white-washing parts, Lopez portraying this character is important — even if it feels absurd to say, since casting a Hispanic woman for the part should be a no-brainer. And hey, there's even a Bronx reference in "Spanish Rose," so if NBC's live version leaves the song in (although the lyrics can be construed as offensive), it will have extra meaning for Jenny from the Block.

While I know I'm getting ahead of myself, as there is still Hairspray Live! to look forward to on Dec. 7, I can't wait to see who else will be in the cast alongside Lopez. John Stamos took on Dick Van Dyke's iconic role of Albert for the Broadway revival, but no matter who ends up being Albert, Conrad, or Kim, they're going to have a lot to live up to with Lopez as their costar.