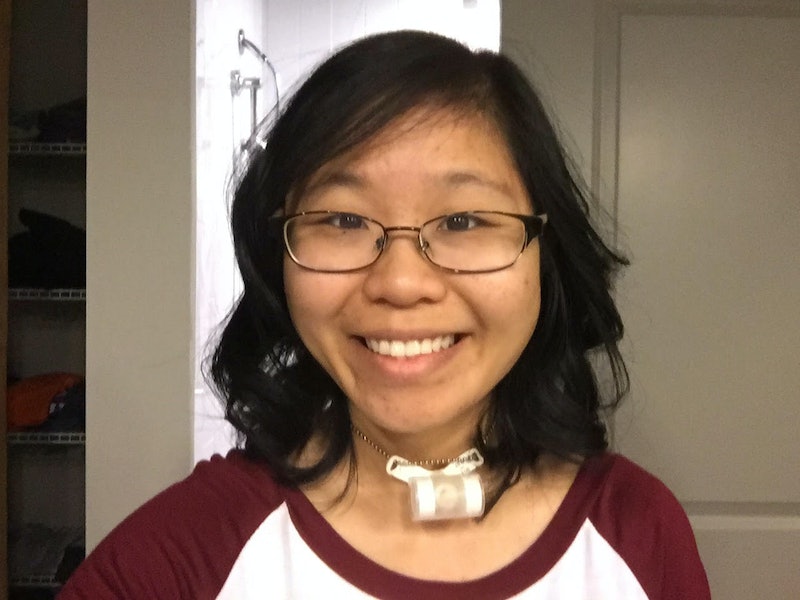 As much as I enjoy fighting ableism and sharing my experiences with discrimination as a disabled woman with vocal cord paralysis, I also like having fun with my disability. I like talking about the awkward, dumb, and silly things that people have called my disability in the past. Iit's almost as if my disability is a character, like it has its own personality. Also, since living with physical circumstances that are outside of my control can be frustrating sometimes, it helps not to take things too seriously.

Here's the thing about having vocal cord paralysis: For me, it's a purely physical disability and the only thing that makes me stand out to other people is a white trach tube around my neck that helps me breathe. I can walk, type, laugh, yell about why feminism matters, and feed myself. As a result, people mistakenly assume that since I look able-bodied, I probably am.

Still, I'm used to getting strange looks on the subway and in the streets. Sometimes, people will notice my trach tube and know immediately what it is, either because they work in the medical field or because they know someone else who has one. But most of the time, people have no clue what it is... at which point they'll proceed to try and guess (usually without asking me). Sometimes the guesses are way off-base, others carry a grain of truth and still others are just plain hilarious. I don't mind the guesses quite as much if it's a new friend who's trying to get to know me. I have less patience for strangers who insert themselves into my daily life and ask unsolicited personal questions, particularly if they tack on a crude joke about my disability. Over time, I've subsequently collected a memorable list of things, both objects and adjectives, that people have used to describe my disability.

It's always interesting to see what strangers come up with, and honestly, it's sometimes a lot of fun. I don't get upset over wrong guesses because, hey, if they've never heard of a trach tube, how the heck would they know what it looks like? I've got a scripted answer for whenever people inquire: "It's called a trach tube, and it helps me breathe." Many people will compare it to things they're already familiar with. But, as you'll see below, I don't always correct them if they get it wrong. (What can I say? Sometimes it's funny!)

Here are 12 things that people have called my disability in the past:

When people ask me why I need a trach tube, I tell them that it's because I struggle with breathing through my nose and mouth. A lot of people want to assimilate this new device into their existing paradigm of the human body. They'll say, "Oh, so it's like a second nose?" My reply is, "Er, something like that."

Sometimes, people don't really know how to react when they're given an explanation about my trach tube, so all they can come up with is, "It's cute. I like it." I don't exactly dislike this comment; it's much more irksome when someone calls me "cute" because I am a petite woman, since it often changes people's expectations of what I am capable of. When my trach gets called "cute," I get the feeling it's because people don't know what else to call it and they're trying really hard not to offend me.

This is by far the most common guess that I've gotten. Since my trach is held up around my neck with a metal chain, several people have thought that it was some sort of necklace, like a choker.

I was once friends with this tall, lanky kid in my high school Latin class who had a thing for science and video games. He always said that my trach looked like a "little filter," which isn't a wrong assessment by any means. Technically, what people see on the outside is not the trach — it's called an "artificial nose" and it works to keep dirt out. So "little filter" is probably one of the most accurate names that I've ever gotten.

I will never forget the time that my sister and I were walking around a mall in China during one summer and two shopkeepers asked me about my trach after staring at it for a while. Before I could answer, one of them guessed, "It's a mini fan, isn't it?" I was so taken aback that my only reply was, "What?" The shopkeeper continued, "I knew that it reminded me of those helicopter hats people wear. Except yours is a fan, right? To keep you cool? That's so clever."

By then, my sister and I had finally caught on. These two shopkeepers were so convinced that they were correct that I couldn't help but have some fun — I mean, I didn't feel like disappointing them. So I said in Mandarin, "Oh yes, and it actually sprays water out, too, you know. To keep my neck cool. It's a new type of technology." Even more oohs and aahs.

We dashed out before I could drown in my own tears of laughter.

In that same Latin class where my friend called my trach a "little filter," I had another friend who later admitted that she'd heard me breathing through my trach during the first week of class but couldn't for the life of her pinpoint where it was coming from. "Honestly, I thought it sounded a little bit like Darth Vader," she said to me. That was the beginning of a long semester filled with Star Wars jokes, all of which I thoroughly enjoyed.

Several years ago when I'd just moved to the south, I was on a hunt to find a new piano teacher. I visited the house of one woman who, upon getting a closer look at me, proceeded to tap on my trach tube twice and say, "Ooh, candy. Yum, yum!" She thought it was a fancy container for holding chocolate. This was me for about two hours thereafter.

This is one of the more common responses I get besides "necklace" (although the two sometimes come one after another). One person suggested that I start a new line of bejeweled trach tubes in different colors, and another person said I should decorate the outside of my trach with washi tape. Usually I don't mind the fashion comments, but every once in a while I wonder if I should actually feel offended or not. I mean, it's kind of like someone saying, "I really like your hair! But it would look even nicer if you got blonde highlights."

Certainly these suggestions are based on good intentions, but they always make me feel like I ought to be self-conscious about what it looks like right now. It feels disingenuous to dress up my trach or garnish it like a birthday cake (not to mention, it's probably not sanitary).

It's interesting to see how different people are sensitive to different sounds. Some people don't notice my breathing at all, while others detect it immediately and look around frantically, trying to locate from where in the room the sound is coming. And yes, I've been called "loud."

Interestingly enough, when I'm recorded on video and watch myself on tape, the sounds of my breathing are extremely obvious to me. Like, I'm basically Brainy from Hey Arnold! And yet, I barely notice it on a day to day basis when I'm just hanging out with myself or with others. Perception is a funny thing.

I once made a very good friend at a club fair in college who didn't realize I had a trach tube until the second time we hung out. She thought something had happened to me after the club fair and seemed genuinely freaked out, saying, "Oh my god, what happened to you?" (I've gotten this exact question more than once.) I thought it was hilarious that she hadn't noticed it before, even though we'd spent several hours at the fair together.

Other friends have told me that they forget I have a trach tube after hanging out with me and getting to know me for such a long time. It becomes part of my appearance — "sort of in the background," they'll say. I'm not sure how to feel when people say my trach isn't noticeable. On one hand, my disability doesn't define me and I don't want it to be the first thing that pops into people's minds when they think about me. On the other hand, I certainly don't want others to pretend it's not there. Acknowledging the existence of my disability is a part of acknowledging me.

Back when I was still in school, I always preferred to sit at the front of the classroom. It's easier to listen to lectures that way, and professors usually remember my face (if not my name) by the end of the semester. More than once, however, I've had professors pause in the middle of their lectures, narrow their eyes and say out in front of the class, "What's that sound? Is somebody snoring in my classroom?"

Realizing that they were probably hearing me, I would quickly adjust my breathing so that it was quieter. Obviously, nobody was actually snoring and, like I said, I don't look disabled to people who aren't familiar with a trach tube. After straining their ears, the professors would eventually say, puzzled, "Huh, that's strange. I could've sworn — anyway. Back to the War of 1812..."

Confession: This is what I used to call my disability as a child. Remember that "artificial nose" I mentioned before, which protects the actual trach tube from dirt and other particles? It looks like this when I take it off:

I used to pretend that it was a fire hydrant, because doesn't it look like one? Sometimes, I would use old ones as toy fire hydrants for my Lego mini figures. I was definitely a ... creative child.

And there you have it: 12 random things people have called my trach tube over the course of my life that have absolutely nothing to do with each other. Despite any challenges it's given me, I've made friends through random conversations we've had about my disability and I've had a lot of laughs, too. In the end, it's not so bad.

More like this
Here's How To Support Jewish People Amid Rising Antisemitism
By Hannah Orenstein
These Are The 3 Most Mellow Zodiac Signs
By Kristine Fellizar
What Does “The Rizz” Mean On TikTok? The Viral Slang Term, Explained
By Alexis Morillo
The 10 Memes That Defined 2022
By Alexis Morillo
Get Even More From Bustle — Sign Up For The Newsletter