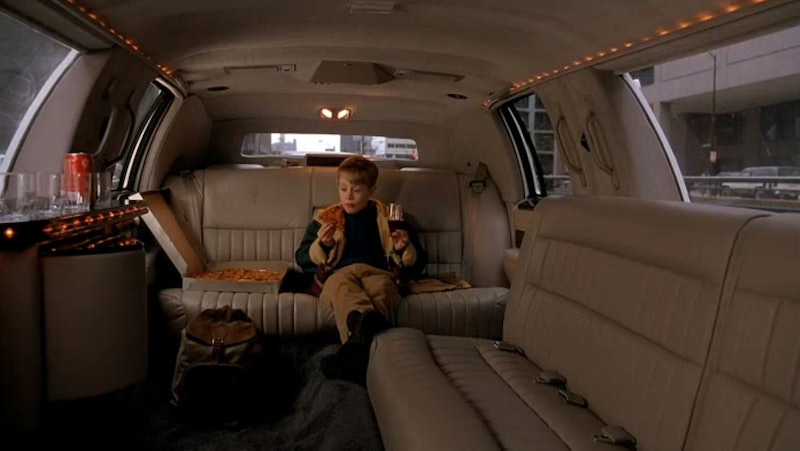 Travelling during the holidays is a pain no matter how old you are. As a child of the ‘90s I always dreamed of escaping these trips in a Home Alone-like fashion, but sadly, I was never left behind. Instead, I developed some pretty advanced coping skills for those long drives to visit relatives over the holidays. And I wasn't alone — there were ways every '90s kid survived family car trips before the age of smartphones.

We were surprisingly resilient when you think back on it, muddling through the hours upon hours bundled up in the back seat, squeezed together with annoying siblings. Most of us dreaded these voyages, as they took away from valuable time that could otherwise have been spent at home playing Oregon Trail or watching one of latest holiday-themed episode of a fave Nickelodeon show. The chorus of "Are we there yet?" was about as familiar as "Jingle Bells."

The parents would try to spin these car trips as important "family bonding time" — but any kid worth their ring pop could see through that nonsense. Here are a few ways every '90s kid coped with family road trips:

It's been 20 years since the original Pokemon Red and Blue came out, and any '90s kid worth their salt was obsessed with these games. Sometimes the only good part of a car trip was getting some quality time with your Gameboy — catching 'em all and defeating the gym leaders on your path to glory. As long as you didn't have to take turns with your siblings, the game was an excellent way to make a long car ride fun.

Listening To Mariah Carey's Christmas Album On Your Sony Walkman

"All I Want for Christmas Is You" hit the charts back in November of 1994, and has since become one of the biggest singles of all time. If you grew up in the '90s, this song was your holiday anthem (and let's face it, probably still is). Getting through holiday traffic was a breeze so long as you had Mariah's Christmas CD and extra batteries for your Sony Walkman.

Singing Along To Disney Songs With The Fam

If you were stuck in a car, unable to pop in a VHS of one of the instant classics Disney made in the '90s, singing along to your fave songs from the movies was the next best thing. A long car trip was the perfect time to practice harmonizing with your siblings to songs such as "Be Our Guest," "A Whole New World," or "Colors of the Wind." A round of "Hakuna Matata" would ease holiday stress in a heartbeat, 'cause, you know, it means no worries.

With so many amazing toys coming out just in time for the holiday season, '90s kids spent an awful lot of time looking forward to what might be waiting for them on the holidays they celebrated with their families. Car rides provided excellent down time for making sure you didn't leave anything off the list. It was difficult to decide what you wanted most — a Furby, Skip-It, Easy-Bake Oven, Tamogatchi, or just a whole bunch of Beanie Babies. One could only hope that if the list was written in sparkly Gelly Roll pen and perfect cursive, maybe Santa would splurge.

Getting Sick From Reading Goosebumps In The Car

A car trip would take no time at all with a few installments of this impossible to put down horror series. Reading about ghost stories, haunted houses, monsters, and everything that goes bump in the night may give you nightmares at Grandma's house, but they were pretty addictive for the middle school reader... so long as you didn't get carsick. It's true that talking dummies weren't really holiday appropriate (except maybe for Halloween), but these short novels were a perfect distraction from a monotonous carride.

Staring Out The Window Praying For Snow

You could kill a good half hour leaning you head against the window and praying to the sky for snow. Those powdery white flakes just made everything better for a '90s kid. Once the first snowfall started, you'd strap on your colorful snowsuit and a pair of moonboots and run outside to build a snowman or have a snowball fight. Without it, winter was just cold.

Stopping At A McDonalds For Some Holiday-Themed Snacks

During the '90s, McDonalds went all out jazzing up their menu for the holiday season. If you needed to stop and grab a bite during the drive, chances are you would head to the golden arches to stretch your legs. There you could try their holiday custard-style pie with a shortbread crust, or eggnog shake (provided your parents weren't scared you'd go sugar crazy), or go for a classic Happy Meal to get one of the special edition Polly Pockets!

Trying To Sleep By Turning Your Sweatshirt Into A Pillow

We all had that overly bright, patterned sweater that we thought (for some reason) were da bomb. Lumpy and ill-fitting, it wasn't the most flattering piece of clothing, but balled up it made an excellent place to lay your head.

Whether it was "I Spy" or "Animal, Vegetable, or Mineral" a family guessing game would usually be played at some point during the car trip. While they were fun at first, these games would soon get old after the third time someone said, "I spy with my little eye something with four wheels."

Hand games may have ruled the playground in the '90s but there is only so many times an adult can listen to "Miss Mary Mac" before they are driven slowly insane.

Caring For Your Tamagotchi

Tamagotchis were one of the biggest fads of the '90s, and an excellent distraction during class or in the car. In order to keep your pocket pet's happy meter up, they would need constant attention. You could kill a good 20 minutes feeding your 'gotchi an electronic loaf of bread or a candy, and attempting to toilet train your pet. Depending on how long the drive is, you would probably see quite a few skull icons, and go through a few pets before reaching your final destination.

Nothing brings back that '90s nostalgia like singing, "Jingle bells, Batman smells, Robin layed an egg" at the top of your lungs over and over and over.

In the time honored tradition of family travel, a majority of the trip would probably be spent fighting with your siblings. Starting something with your older sib was easy as saying, "Nirvana is dumb."

Happy holidays, and remember to buckle your seat belt — it's going to be a bumpy ride!

More like this
The 'Hocus Pocus' Sequel Finally Has A Release Date & It Makes Total Sense
By Shannon Barbour and Radhika Menon
David Schwimmer Doesn't Remember This Classic 'Friends' Episode
By Sam Ramsden
‘90s Streetwear Brands That Are Making A Major Comeback
By Dominique Norman
Hayden Panettiere Will Return For 'Scream 6': "We F*cking Won, Scream Fam"
By Jack Irvin and Jake Viswanath
Get Even More From Bustle — Sign Up For The Newsletter