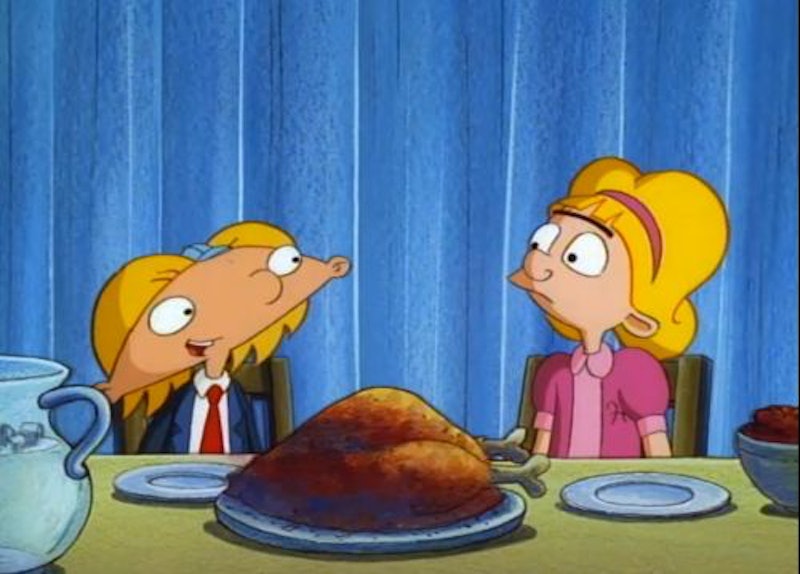 Like many things in life, holidays are completely different as an adult, compared to what we knew in our childhoods. In fact, there are more than a few things about '90s Thanksgiving that were actually kind of weird, when you think about it. To be fair, we were just kids; wee ones needn't get caught up in the nitty-gritty details. And yet, nowadays, I find myself scratching my head at some of the Thanksgiving traditions and activities we so normally took part in.

Thanksgiving isn't the only holiday that got kind of weird, either. On Halloween, we ask for candy from strangers, because that's always a good idea (and also there's historical precedent). Before Christmas, we threaten naughty kids with a lump of coal from Santa Claus if they don't start behaving. Really, don't kids go through enough already? (And on another note, did anyone actually get coal instead of presents? I'm honestly curious. If you did, do tell!)

I'm not trying to kill your Thanksgiving buzz. I loved the holiday as a kid, and I still love it as an adult. (Pass me that green bean casserole, dude.) But you still have to admit that some of these things from our '90s Thanksgivings were just a tad bit... strange.

What History Class Taught Us

Elementary school (and beyond) taught us that Thanksgiving was originally the peaceful coming together of two very different groups of people, who sat down for one heck of a meal and jolly good times. In reality, settlers came to this country and were like, "Hey, folks. I know you got here first and called dibs on this land, but... get out."

Shoving Food Up A Turkey's Bum

I know this wasn't limited to the '90s, but just typing this makes me uncomfortable. Whose idea was it to start doing stuffing turkeys in the first place? I know the bird's dead, but... yowzers.

I always felt kind of uncomfortable hugging those relatives who showed up for the holiday, but we never spent time together otherwise. It felt so dishonest, like, "I love when the family comes together for the holiday! I'm sorry — what was your name again?" (Fun fact: This is great opportunity to start teaching kids about consent and bodily autonomy from an early age. Maybe instead of making them allow a bunch of strangers to touch them whenever they want, let's teach them they're allowed to say no if it makes them uncomfortable. Everybody will be much happier in the long run.)

The Food We Ate

Two of the biggest Thanksgiving staples — turkey and pumpkin pie — likely weren't even eaten at the first Thanksgiving dinner. There was no butter or wheat flour to make crust, and there was very little sugar. Pilgrims and Native Americans also didn't have cranberries and sweet potatoes. As for the turkey, we know that there was wild fowl, but that could have meant swans, cranes, and quail. So... why the big deal about the "traditional" table? We may never know.

How We Dressed Up In School

Thanksgiving celebrations at school in the '90s often meant dressing up in costume. But did you know that pilgrims didn't even wear the buckled hats and black-and-white outfits we thought they did? Buckles didn't become a fashion statement until later in the 17th century, and the black and white clothing was more formal and saved for Sundays.

And, uh... let's also not dress a bunch of kids up in traditional Native American dress if they're not Native American. Remember that whole thing about using Thanksgiving and other holidays to teach kids about consent? We can also use it to teach them about cultural appropriation.

Martha Stewart made deep-fried turkeys famous in 1996, and nearly 1,000 homes across the country have accidentally charred their birds to a crisp ever since. Let's be clear about one thing: Only Martha can pull this off. Martha knows all. Stick to your oven, folks.

The Lip Syncing At The Macy's Thanksgiving Day Parade

As fake as it may be, it's a time honored tradition. Sometimes you just have to turn the other cheek.

Being Seated At The Kids Table

This is supposed to be one of the few times a year when we all pretend to like each other, and you relegate me to the kiddie table? What am I, chopped liver?

Did anyone else make the Thanksgiving turkey with your hand? You know what I'm talking about — you'd trace your hand on a piece of paper and decorate it as a turkey. Every single year. Who was the first person to think that hands look like turkeys, anyway?