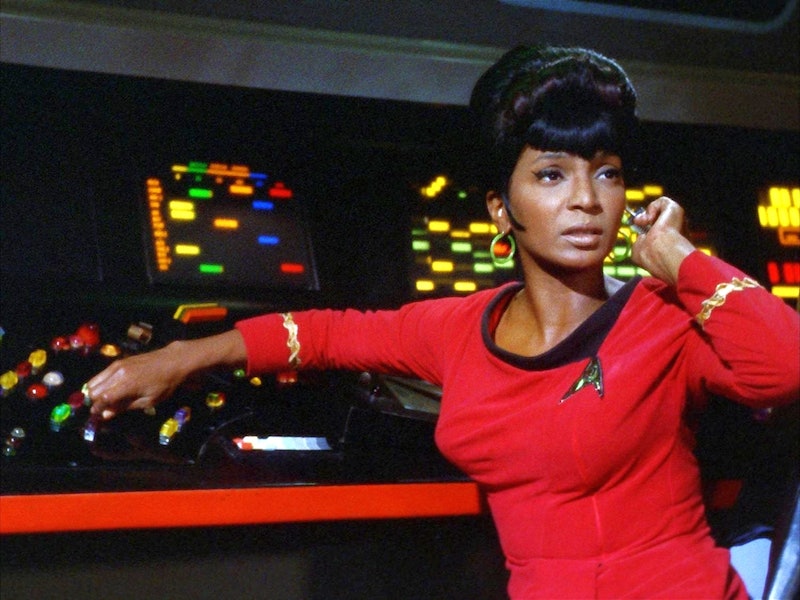 Unlike most Trekkies, I didn't get into Star Trek at an early age. In fact, it wasn't until three years ago that I was properly inducted, thanks to my wonderfully nerdy partner. Initially, I was reluctant. I'd seen some of the not-so-good episodes that revolved around Kirk kissing X green alien on X planet for no apparent reason — and I wasn't amused.

My boyfriend chose to show me "Let That Be Your Last Battlefield," the iconic 1969 episode in which the crew meets the Cherons, a race whose skin is half-black and half-white. (Racial analogies ensue.) The plot line may seem cheesy, but it's totally not.

I proceeded to Netflix-binge every episode of the first three generations of the show. A bond was formed, and before I knew it, I was wishing my parents had shown me Star Trek instead of all those Disney princess movies as a little girl.

We saw the potential wonders of living without poverty, war, and religion. We saw a future in which inequality and racism were things of the past. And through strong female roles, we saw that women could be just as smart, just as tough, and just as successful as the boys.

Yes, Kirk kissed a lot of seemingly vapid blonde aliens along the way, and J.J. Abrams's 2013 reincarnation Star Trek Into Darkness had a whole lot of half-naked Alice Eve for no apparent reason. But watch the women in earlier seasons, and you'll find they are pretty badass. Here are just a few of the lessons I've learned from these interstellar women.

Star Trek brought women to the forefront, creating not just a female Lieutenant, but an African American female Lieutenant (in the 1960's!). Uhura never failed to tell Spock or Kirk when they were being dicks, nor did she ever fail to stay on her toes during life-or-death situations. It was her excellent determination and hard work at the Academy that landed her her job on Enterprise, and she never let anyone doubt her.

Women Can Be the Boss

The '90s Voyager was the first Star Trek to cast a woman as Captain of an entire starship. Captain Janeway stayed strong for the rest of the crew when they were stranded 75,000 light years from Earth. Just watch this clip and see if you'd dare mess with her.

Everyone Struggles With Identity and Body Image

Voyager's B'Elanna Torres had quite the backstory. Part-Klingon, part-human, she didn't have an easy upbringing (the two races had only just eased their tensions when she was a child, dontcha know). Her Klingon roots also meant she had a brutal temper, and said temper got her kicked out of Starfleet. Girl's tough — but she's also remarkably sensitive. Just watch this plot line tackling identity and eugenics.

Your Feelings Are a Strength, Not a Weakness

The half-Betazoid, half-human Counselor Deanna Troi wasn't necessarily the favorite of Next Generation (can anyone other than Patrick Stewart be the favorite, really?), but her ability to sense emotions and endlessly empathize with those around her (hello, female traits) made her an invaluable part of the team. She showed a strength of character, and embodied the power that is listening.

You Don't Have to Have a Baby

Oh, Kes: the loveable Ocampa of Voyager. The Ocampa species has a tremendously short lifespan of nine years, so aging happens far faster than it would in a human. By the time Kes is almost two, she hits puberty. For an Ocampa, puberty is the only time conception is physically possible. Kes initially believes she can continue her medical training while caring for a child, but ultimately decides that there was simply too much she still wants to do before becoming a mother. She isn't ready to have a baby — but also makes it clear that doesn't mean she can't have sex.

OK, so maybe that's a little creepy, but hey, these women of Star Trek are clearly on to something.