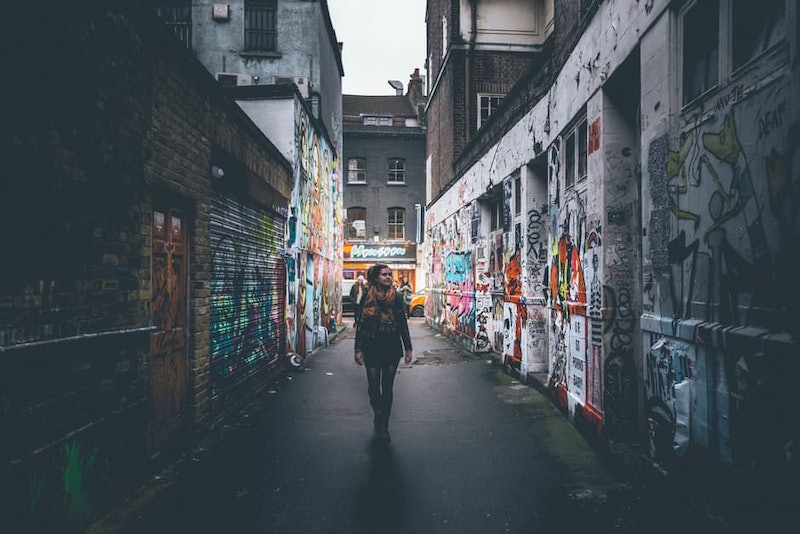 In a perfect world, no one would have to be street smart. We'd all be able to walk alone in strange cities, or casually stroll home after parties without a care. But, for many reasons, this is simply not a reality. While I'm not saying there is danger at every turn, it is often necessary to glance over your shoulder, or to walk a bit faster when in lonely parking garages. Far from paranoia, these are simply precautions that keep you safe.

And that's exactly what street smarts are. "A great synonym for street smarts is having common sense," says SafeWise safety expert Sarah Brown, in an email to Bustle. "Having street smarts means knowing how to respond in different situations ... and paying attention to your surroundings."

It also means acknowledging worst-case scenarios and then taking steps to prevent them — in the most casual way possible. Because again, this doesn't mean you have to live in fear. But keeping in mind how thing might go wrong will make you less likely to have a problem. So, do you know how to keep yourself safe? Read on for some signs you have street smarts, as well as what to do if you don't.

1. You Stay Aware Of Your Surroundings

Nothing screams "I have zero street smarts" quite like walking to your car at night whilst wearing headphones or checking your phone. That's why having your eyes (and ears) open is so important. "By keeping your head up and aware of your surroundings, you can take away the element of surprise; a common tactic of attackers," says Jill Turner, from San Francisco-based safety device company ROBOCOPP.

2. You Have A Self-Assured Walk

Sometimes, all it takes to stay safe is a don't-f*ck-with-me walk. "Self-assured posture and movement tells a lot about you," Turner says. "Multiple studies have shown the way you walk has an effect on how likely you are to get mugged." So put those shoulders back and stride forth with confidence.

3. You Know How To Blend In

If you've ever toured a new city — or gotten stuck behind people touring yours — then you know how travelers stick out like a sore thumb. And that's why you should always make it a point to blend in. "You don't have to look and speak like the locals," says self-defense teacher David Blackmer, via email. "Being flexible, easy-going, and genuinely polite is usually sufficient."

4. You Don't Get Easily Intimidated

Of course you know not to pick fights or get mixed up with bad company. But that doesn't mean you let people push you around, either. If someone starts causing trouble, you put on your bravest face. Blackmer tells me one way to do this is by smiling and offering a quick greeting. "You don't have to stop and have a whole conversation, but a sincere 'good morning,' works wonders on those who might otherwise make you a target," he says. "It shows them that you're not afraid of them, and that you see them as normal people, too."

5. You Aren't Afraid To Tell People To Back Off

If someone is acting so bold as to bother you on the streets, you don't think twice before telling them to hit the bricks. "Strongly and assertively saying a simple command such as 'back off' is often enough to put a potential attacker to flight," Turner says. (The louder, the better.)

6. You Don't Show Signs Of Weakness

Sure, you might feel scared. And yes, you might be totally lost. But you'd never give off those vibes. "Those with malicious intent are looking for weak victims, not individuals willing to face them," Blackmer says. So keep your cool and stay alert until you get back to safety.

7. You Know How To Minimize Your Risk

You wouldn't dream of counting your money on the subway, or walking down the street with an open purse. People with a healthy dose of street smarts never turn themselves into an easy target.

Yes, that person behind you is driving aggressively. And now he's parking right next to you. Do you get out and flip him the bird, or calmly go on with your day? (The correct answer is the latter, of course.) "Being street smart is not about your ego or your pride," Blackmer says. "If someone bumps into you, insults you, or even looks at you in a weird way, there's no need to make a scene or change your plans."

9. You Don't Get Easily Distracted

There are so many instances where distraction can get you into trouble. Maybe you're fumbling for your keys, or burying your face in a map, or staring into your phone. It may not feel like a big deal, but these are all great ways to turn yourself into a target for nefarious types, Turner tells me. Street smart people have their keys handy, always stay alert, and learn directions before they leave.

10. You Don't Over-Share On Social Media

Going on vacation? Awesome. Just make sure you don't give out all the details on your public Facebook page. "Social media gives everyone, including strangers, a clear view into your world, leaving you vulnerable and exposed," says SafeWise safety expert Sage Singleton, in an email to Bustle. "Wait until after a vacation to post pictures and don't 'check-in' at a hotel or airport."

Does that shady alley look, well, shady? If so, you always listen to your gut and avoid strolling into creepy situations. "Street smart people are able to assess situations and make safe, smart decisions," Singleton says. Often, that means changing the way you planned to go. And that's totally OK.

12. You Don't Leave Without A Plan

When it comes time to leave work, or head home after a party, you always have a plan. You know where your car is, have your keys ready, and make sure to check in with people once you get home. "That way, should something come up, you have left a clear trail of your whereabouts," Singleton says. Always a good idea.

If you're feeling uneasy — be it on a date, while at the bar, when visiting a neighbor — you know how and when to you excuse yourself. "This action does not have to be a physical response in the sense of the silly Jason Bourne variety," says self-defense expert Benjamin Drader. "But, is most likely removing oneself from the environment." There's no shame in heading on home, if that's what your gut's telling you to do.

And when it comes to street smarts, that's really where it's at. If a situation feels weird in any way, go ahead and take action. You don't have to live in fear, but being aware of your surroundings — and trusting your instincts — can make all the difference when it comes to staying safe.