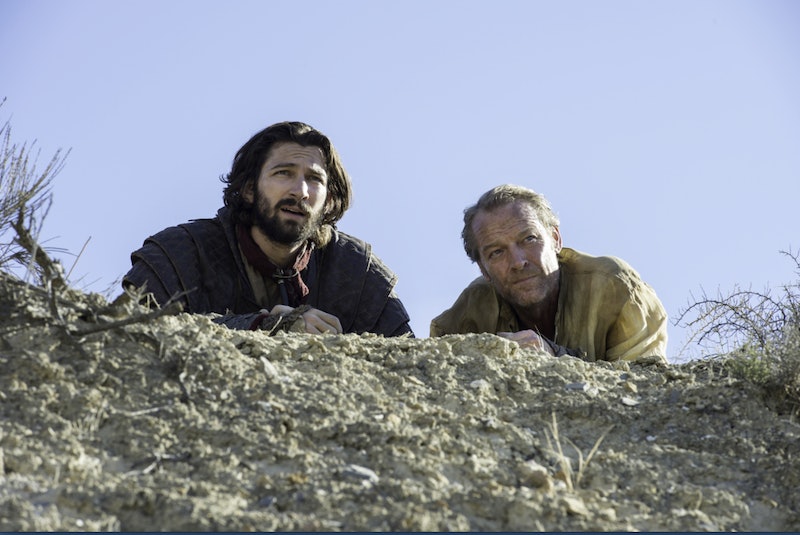 Along with all the blood, guts, mischief, and mayhem Game of Thrones offers, occasionally the show throws in some comedy now and again. One of the best instances of this, and in my opinion the most underrated GoT scene of 2016 was the also incredibly awkward boy's talk between Daario Naharis and Jorah Mormont in Episode 4, "The Book of the Stranger." Let's revisit the underappreciated moment.

While on a quest to rescue their queen, the two soon-to-be spurned lovers of Daenerys Targaryen (as in, they both loved her — whether or not she loved them in the same manner is up for debate) got a great opportunity to share secrets, compare swords, and discuss one of their favorite things — the silver-haired girl with a bunch of titles behind her name: Daenerys Stormborn of the House Targaryen, First of Her Name, the Unburnt, Queen of the Andals and the First Men, Khaleesi of the Great Grass Sea, Breaker of Chains, and Mother of Dragons. While the scene is humorous in a Daario-Naharis-is-the-type-of-guy-who-does-locker-room-talk kind of way, it's also useful because it humanizes Daario, and makes us like him slightly less than we may have before.

The conversation starts with Daario saying: "She's wild. Don't let her size fool you. It's hard enough for me, and I'm a young man. I don't think your heart could take it." And he's not describing walking a small dog or riding a bucking bronco, so it's pretty clear things can only get worse from there. Look you dirty murderer-for-profit, Daenerys Targaryen is a Queen with a capital Q, who can walk through fire and controls dragons. You shouldn't talk about any human in that callous way but least of all her. No wonder Khaleesi left him behind while en route to Westeros — now she has time to get down with some self-exploration and pursue a steamy but maybe a tad complicated relationship with Yara Greyjoy.

Jorah becomes us all as he patiently explains to this guy (who was clearly masquerading as an adult warrior and is probably actually several immature boys stacked on top of each other) that, "You'll disappoint her before long. She'll move on." Get it Jorah! This is also a great moment for Jorah because the saucy Naharis has been giving him lip the entire trip, and he's attempting to rescue the object of his deeply unrequited love, and he's got a terminal disease. It's good to see Jorah finally have a win. Sure, he's made some mistakes, but he's seriously gone to redemption town and I can't help but wish the guy all the best.

The sad part about this scene is after Daario pulls out his sword to show off his strength, he gets a healthy look at Jorah's greyscale. He asks (because Daario Naharis is clearly always down to mansplain) if Mormont happens to "know what happens" with the condition. Jorah, yet again comes back for the win with his stoic, "I know what happens."

While this scene is small, and some may feel insignificant, it contains telling dialogue which really illuminates the characters. It also makes us feel less bad for Daario when he gets dumped.

I'm OK with never seeing Daario again in the patiently awaited Season 7, but I could get down with more scenes like this one.