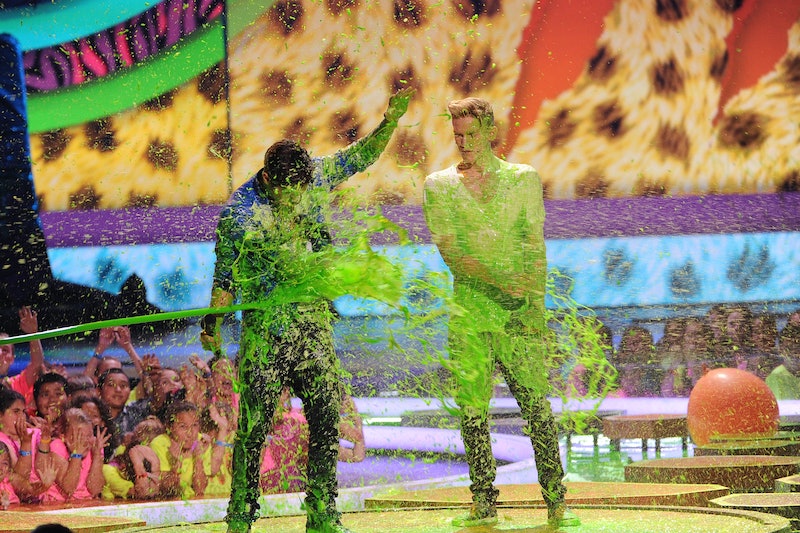 Nickelodeon is in hot water as they deal with a fallout with Sam & Cat actress Jenette McCurdy — one that comes in the wake of the actress' sexy lingerie selfies that were leaked on the internet. Former Disney actress Selena Gomez moved from self-imposed rehabilitation to posting artistic nudes of herself on Instagram and the less said about Miley Cyrus the better. The Disney curse is something that we've all known about for a while since the number of former Disney stars who haven't been to rehab or prison or had some sort of scandal are a lot easier to count than the ones who have, but Nickelodeon has always been sort of overshadowed by that in more ways than one.

It's debatable whether the mainstream world would know McCurdy's name if not for her scandal and feud. This scandal could be the best thing that happened to her career because, to be honest, half the former or current Disney and Nickelodeon stars saw a rise in their fame after having one. Vanessa Hudgens had her nude pictures leaked on the internet just before High School Musical 3 and she went on to have a lucrative acting career. Amanda Bynes was on her way to relative obscurity before her Britney Spears-esque breakdown. Drake Bell was already there until he spoke up about how much he hates Lady Gaga and Justin Bieber. But is it possible to be a successful Disney or Nick star without using controversy as a crutch? At least six have celebrities managed.

Gosling is a little long in the tooth to be considered a former Disney star, but he was on the Mickey Mouse Club with the likes of Justin Timberlake (see below) and Britney Spears and he seems to have escaped the curse so far. The only real scandal that Gosling has ever been attached to is his ability to look amazing in absolutely anything. Is there some Dorian Grey-esque demonic pact behind his effortless good looks or is he just an actual Greek god? Who knows?

Timberlake got his start on the Mickey Mouse Club before moving on to *NSYNC and then a solo career. He's been a dancer, a singer, an actor, and a comedian. And, all right, he hasn't been completely squeaky clean — remember the Super Bowl controversy of 2004? But Timberlake was more than established by that point and it was an accident that put social networking on the map, so really it did more for the Internet's career than Timberlake's.

Song played the ditzy heiress London Tipton on The Suite Life of Zack and Cody, who was basically the best parody of Paris Hilton in the world. London was a far more scandalous person than Song is in real life. She's one of the few Disney stars who never had any interest in the party girl lifestyle and between her role in 2009's The Social Network and her guest appearances on ABC's Scandal, I'd say she's doing pretty well for herself.

Anyone who doesn't consider Hilary Duff the original live-action Disney princess must have slept through the 90s. She went from starring in Lizzie McGuire to releasing a few albums alongside a fantastic movie career. These days, she's been getting back into the music scene and fending off Aaron Carter's advances, proving that it's possible to keep it classy no matter how many years are separating you from the Disney curse.

It's been a long time since Clarissa Explains it All gave Hart her start, but since then she went on to star in a little pop cultural staple called Sabrina the Teenage Witch. She has a lot of television shows and movies under her belt and stars on Melissa & Joey on top of being a writer, but the one thing she hasn't done yet is been involved in any scandal. She even had time to open and run a candy shop from 2009 - 2011.

Fun fact: Before she got her role on Glee, Agron made a guest appearance as one of Drake Bell's many, many girlfriends on Drake & Josh. Since then, her character, Quinn Fabray, has stirred up more on-screen drama than Agron has ever stirred up herself. Whether she escaped the former Disney/Nick star curse due to only being one by technicality or whether Glee gave her all the fame she really needed without a scandal in the mix is anyone's guess. Either way, she's doing well.

More like this
Selena Gomez Reacts To TikTok Users Who Say She Shaded Hailey Bieber
By Grace Wehniainen
Taylor Swift, Kerry Washington & More Speak Out On Uvalde Mass Shooting
By Jake Viswanath
Selena Gomez Joked About Her Relationship Status In Her ‘SNL’ Monologue
By Grace Wehniainen
Britney Spears Thanks Fans After Miscarriage & Explains Why She's Writing A Book
By Jake Viswanath
Get Even More From Bustle — Sign Up For The Newsletter