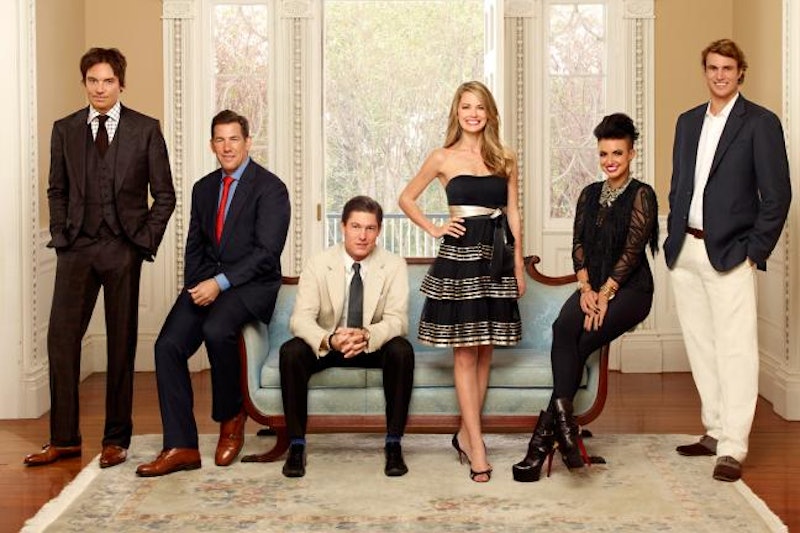 There are three types of southerners: 1. Those who leave as soon as they can, spending late nights trying to lose their accents; 2. Those who are proud of where they came from and will own up to it gladly, whether they stay in the South or move away; and, 3. Those who have something somewhere in their house embroidered with “American by birth, Southern by the grace of God.” I happen to be in the middle, along with just about everyone I was raised with in South Carolina. The cast of Bravo’s surprising hit Southern Charm (a hit by Bravo’s standards — don’t get crazy) would lead you to believe they’re all the latter, and a season full of sweet-tea-swilling, polo riding and drawn out vowels just might convince you they were all born and raised in Charleston, South Carolina.

Now, it’s one thing to tarnish the name of the Holy City with your standard elitist, white bread, poorly-behaving hooligans. But just as Snookie was from New York and Pauly D was from Rhode Island, many of these hooligans aren’t quite as Charleston born and bred and Southern Charm might want you to think. Although, to be fair, for the most part these are all Southerners who are willing to stamp their escapades on "Southern gentility." So, if they’re going to call Charleston their city (and, good gosh, possibly come back for another season), let's get this cleared up: Just how Southern are Craig Conover, Cameran Eubanks, Jenna King, Shepard "Shep" Rose, Whitney Sudler-Smith and Thomas Ravenel?

Alright, fine. Thomas Ravenel, worst offender in all main reality TV areas — (unprotected) sex, drugs and closed-mindedness — is about at Charlestonian as they come. It is truly as unbelievable that he did this show. Ravenel was born and raised in Charleston. He really is from that “small, ruling, entrenched minority” that Whitney so delicately mentions in the Southern Charm trailer. His father, Arthur Ravenel, is a former politician who served in Congress, ran for governor, and held a seat on the county school board at age 79. Oh yeah, and the New Cooper River Bridge, one of Charleston’s most famous sights — named for ole’ Arthur. He wasn’t without his flair for the dramatic too, but he could hardly hope to compete with his son, who won the South Carolina Treasurer seat in 2006 (alright!), just before he was indicted for federal cocaine distribution charges in 2007 (oh no…). That’s right, the truest Charlestonian in the cast is also the only one to have served time in federal prison. Charleston Ranking: a reluctant 10

We can thank Whitney for shining a light on the “genteel customs” of the South; he serves as an executive producer on Southern Charm. And even if most of the charm is lost on the editing room floor, I guess he technically knows what he’s talking about, though his family originates a little further north, planting roots in Virginia in the early 17th century and making their way down to South Carolina. His mother is Charleston’s favorite Norma Bates: southern socialite, turned Manhattan socialite, turned Charleston socialite, Patricia Altschul. So, if Whitney wants to run his mouth about living South of Broad, I guess he technically can, because that’s exactly where he lives, with his mother in the $4.8 million Mikell House (ahem, mansion). As a transient Southerner myself, I’ll try not to hold Whitney’s 17 years in L.A. against him… but that doesn’t mean I can’t hold his snotty attitude against him. Charleston Ranking: 7 (because of mommy dearest)

Shep, that golden retriever of a man, is South Carolinian to his roots, but calls Charleston his new home, and don’t let him sweet talk you into believing otherwise. The man-boy (Can you believe he’s 34-years-old?!) was born and raised in Hilton Head, SC, though his family founded the town of Boykin, SC in the 18th century. His party boy ways have brought him to Charleston, which I wouldn’t consider the deepest of roots. There do seem to be plenty of women to keep him entertained though. Charleston Ranking: 6, but mostly because of that state dog

Cameran… sweet, funny Cameran, thank goodness we have you. With a name that spans 10 generations in South Carolina, Cameran can truly claim that state, and we’ll claim her. She’s fun, she's self-deprecating, she seems to have a good head on her shoulders! She was raised in Anderson, SC (and, of course, took a brief detour to San Diego on The Real World ), but has relocated to Charleston where she says “a last name means a lot.” Cameran, I like you, girl, but I think “that girl from Southern Charm” might end up meaning a lot more than Eubanks. Charleston Ranking: 6 with room for growth

Jenna reads every bit the big city girl, but she was raised in rural Sumter, SC, just up the way from Charleston. It was far enough away that it took living in big cities on just about every other continent before she made it back to the littlest big city of the South. Jenna has somehow acquired a pretty kick ass house in downtown Charleston, but it will take a few more years sitting still before she’s considered a local. Something tells me that’s not in her DNA. Charleston Ranking: 5 with extra points for appreciated style

Oh Craig, where did you come from? How did you find yourself on this show? You’re so young, so naïve, and so from Delaware. Well, I guess it was flying south for an education at College of Charleston that brought him to the Holy City, and the culture that made him stay. Can’t hate on a guy for that. He’s stayed on for law school and is finishing his 3L year at Charleston School of Law; that South Carolina Bar exam pretty much keeps you put, so let’s just call this guy a transplant (and kindly ask him to do something about his lawyer hair). Charleston Ranking: still a 2

Bless all their hearts, I reckon.