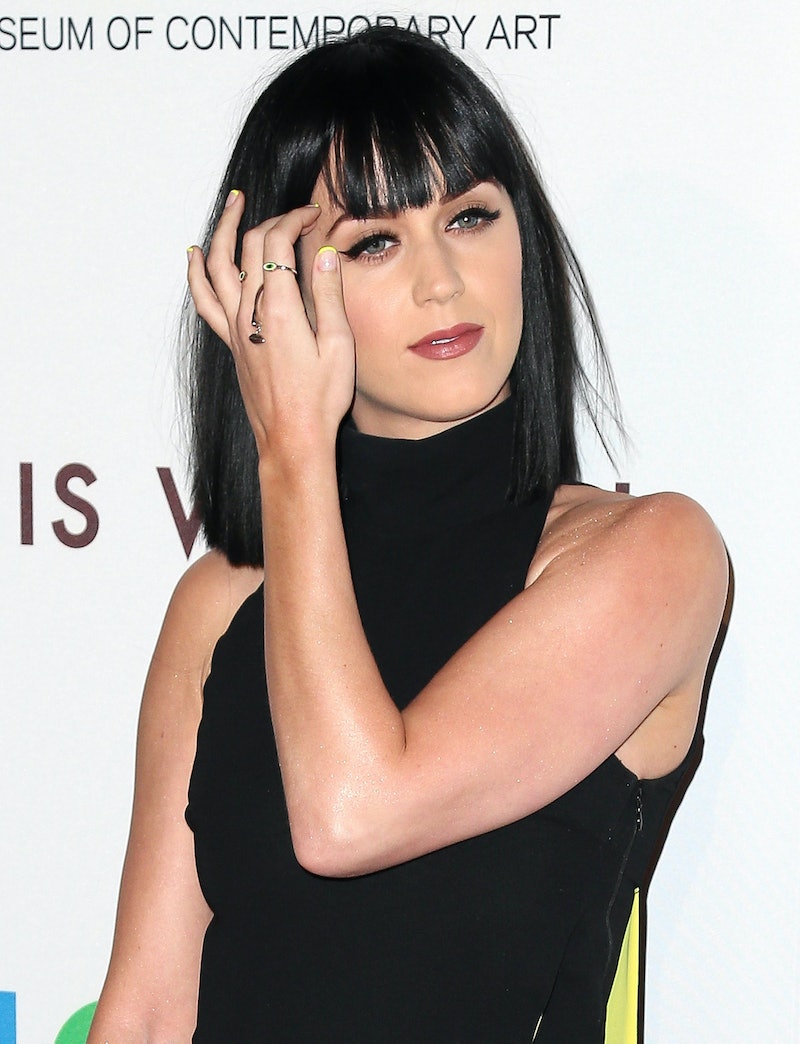 When Katy Perry isn't causing an up-ROAR (hah, get it?) with her video or stage performances due to cultural insensitivity, she's busy running the world. Her Prismatic World Tour for her album Prism has been one giant, technicolor success, and she's by far one of the most consistent producers of number one songs who's come out of the last decade. From the looks of things Miz Perry is killin' it, so where's her lucky other half? In her latest cover story for Rolling Stone, Katy Perry decided to let everyone in on what happens once she takes off the latex costumes and washes away the body glitter, especially when it comes to her romantic situation. When describing her notoriously painful divorce from Russell Brand, which inspired a lot of her most recent album, she called it the "death of a dream."

It was emotionally traumatic for me. I was in fairy tale land, and the reality of it wasn't so.

Stars, they're just like us. Even drop dead gorgeous, über-successful pop stars go through heartbreak. Luckily, Perry hasn't given up hope, so there's still the possibility of her walking down the aisle in a skin-tight, light-up wedding gown someday down the road.

I'm interested in colorful personalities. Look, I can't be perfect. I don't know. I think you love who you love. You learn over time. I mean, each one has been different. I tweeted the other day that I'm just looking for the prince that fits my glass Jordans slipper.

Out of all of Hollywood, who should be the one to fit those "glass Jordans slippers," Katy? Is it on-again, off-again flame Diplo? Although she also mentioned in the interview that she "doesn't need a dude," (*insert fist-bump here*), who doesn't want to see the Queen of TGIF ride off into the sunset with the perfect man? Since Chris Harrison is too busy cleaning up the mess that Nick Viall and Andi Dorfman left behind, I'll happily step into his shoes to line up a few contestants for a very special edition of The Bachelorette, starring our girl Katy.

Chris Evans — Evans is sweet, hot, and has arms big enough to shield Katy from every last one of her haters. Her wild side (read: green hair) would keep the relationship from getting too boring. If nothing else, they should be together for the Captain America-themed musical number she would later introduce into her tour.

Orlando Bloom — Since splitting from wifey Miranda Kerr, Legolas is back on the market. Judging from recent events, Perry can totally count on Bloom to stand up for her against certain egg-throwing pop stars. Honestly, a man who attempts to punch Justin Bieber is a keeper.

Michael B. Jordan — Think of the children! THEIR children! Between his smile and her pipes, they'd have a beautiful actor-singer superbaby.

Chris Martin — Katy could be exactly what Chris needs to get over his split from Goopy Gwynnie. With an experienced, chill older guy like him, Perry wouldn't have to worry about any kind of Brand-related flashbacks.

Drake — Both a little unlucky in love, and both unafraid to sing about it, this twosome could create some sweet, sweet music together. Team Draty (Krake?) all the way.

Jason Segel — Funnyman Jason Segel could be the perfect guy to lift Perry's spirits. He's goofy and fun, which would mesh perfectly with Perry's Kathy Beth Terry persona. Come on, guys! Do it for us!

John Mayer — Okay, okay. He's probably not the best choice, but their relationship was adorable. Between the romantic duet they had to their lavish vacays, it seemed like these two crazy kids were going to make it. Here's hoping for a reconciliation!

Well, like Perry said, she definitely does not need a man to make her happy (the millions and millions she's making all on her own should help out with that), but if she does decide to dip her toes back into the dating pool, maybe one of these studs will get lucky.