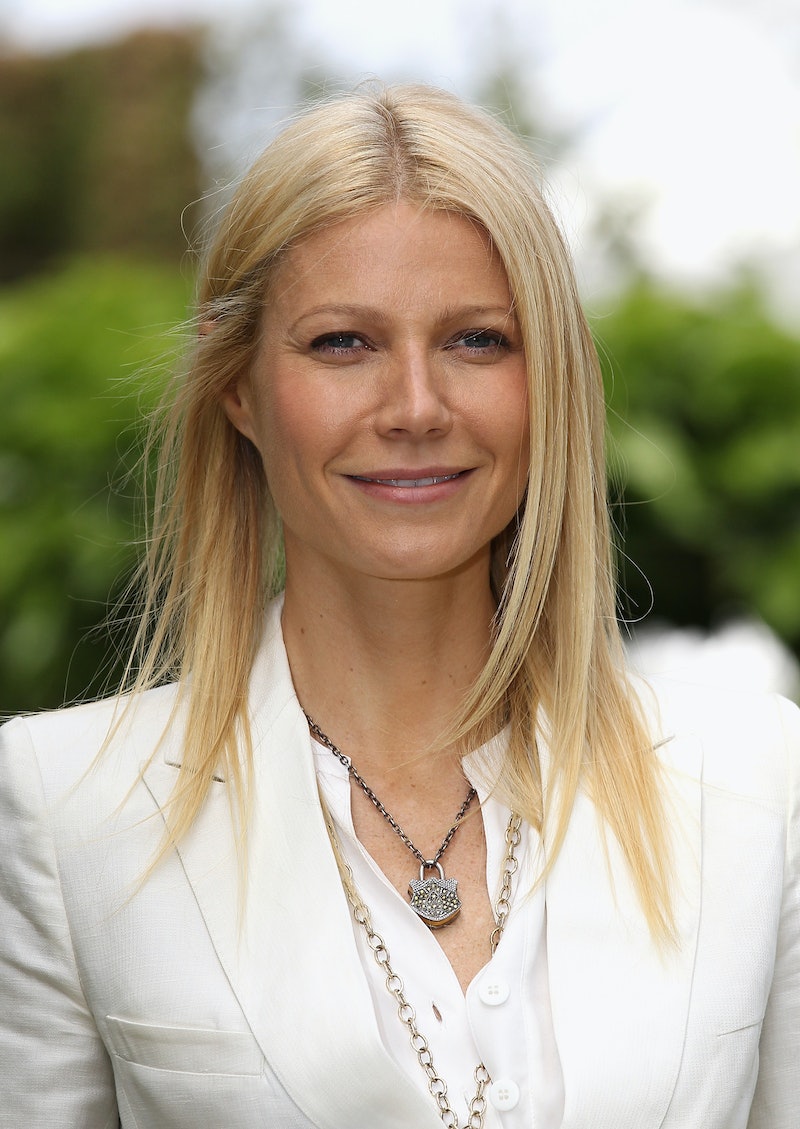 Each couple handles breakups differently. Some stay in touch. Some sever ties completely. Some "consciously uncoupled" folk subject each other to philanthropic dares via social media. Gwyneth Paltrow took the Ice Bucket Challenge on Wednesday and nominated Chris Martin, proving that she and her ex are of the final category. Phew, so maybe we don't need to worry about a Jennifer Lawrence, Chris Martin, Gwyneth Paltrow love triangle after all. Then again, this is a bit of an ambiguous gesture. Perhaps y'all can help me out, because I'm having trouble decoding its meaning. Are Paltrow and Martin still good friends, or does this indicate a bit of passive aggression between the pair?

Let's examine the video for clues. In the clip posted to her Intstagram, Paltrow stands expectantly in a bikini, showcasing her Tracy Anderson-sculpted abs. Because nothing Paltrow does is complete without a humble brag, she prefaces the challenge by mentioning that she intends to donate to ALSA.org. Oh, Gwen. You never fail to meet our expectations of your smugness. Continuing the never-ending web of celeb connections over the Ice Bucket Challenge, she taps Chris Martin, Cameron Diaz, and Stella McCartney to take it on next. Then, on comes the ice cold water and the shrieks!

Shall we feast our eyes? After all, you probably thought you wouldn't live to see the day that Gwyneth Paltrow would publicly douse herself with ice cold water. This is a gift of schadenfreude from the Universe, people.

Hmm, this is indeed a complex text to examine. Even if they're technically exes, this could mean that they're still the best of buddies who love to exact well-meaning acts of mischief upon each other. Although the two "consciously uncoupled" back in March, the separation statement that the pair made on GOOP was super diplomatic. They've also been spotted looking rather coupley with their children Apple and Moses, so it wouldn't be surprising if they were on good terms/getting back together.

Furthermore, the fact that she mentions Martin first in the league of nominations may mean that they're still besties. After all, Cameron Diaz and Stella McCartney are some of Paltrow's closets friends, and Martin being the first mention in this list is like him snagging the number one place in her Myspace Top 8 circa 2005.

But! This could be a jab dressed in jolly prank's clothing. After all, that divorce statement was almost too diplomatic. You know what they say about insults masquerading as jokes. And how many of us would take the opportunity to see their exes dump a bucket of cold water on their heads? I'm totally not above it. What better way to do this than to check your ex with a dare that they can't refuse, lest they look like a heartless tool?