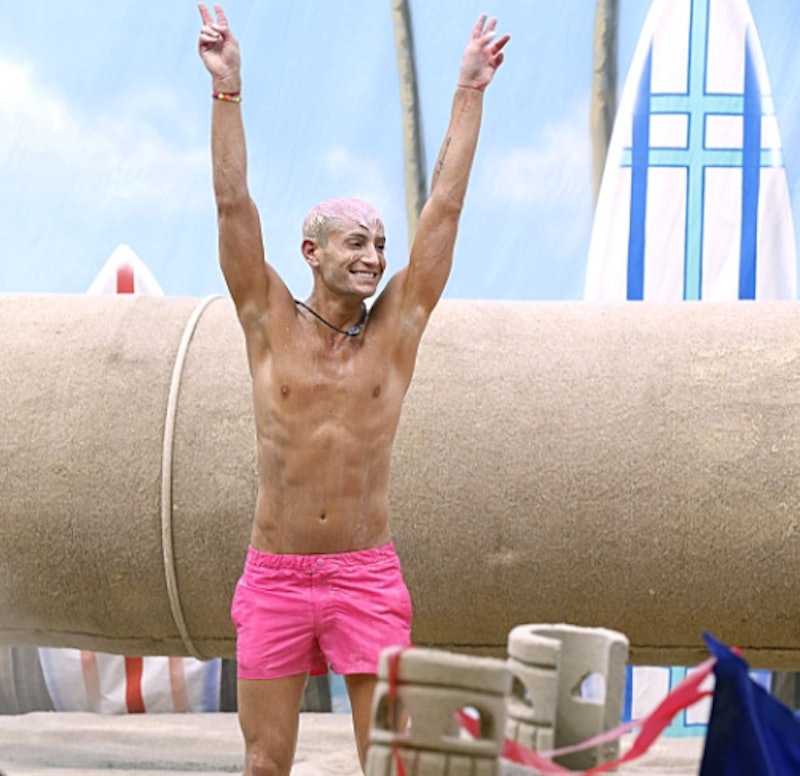 Believe it or not, this season of Big Brother is going to be over before we know it. The finale is set to air Sept. 24, and with that date rearing near, we — as America — will be responsible to vote for America's Favorite Player of Big Brother 16 . This year, there has been a lot of controversy over the fairness of America's Favorite Player with Frankie Grande being a houseguest during the season. Frankie's career as a social media "mogul" depends on having fans that follow you on Twitter and Instagram. So when a vote like this comes into play — a vote that is a popularity contest — do the other houseguests even stand a chance against Frankie's combined 1.6 million fans (not even counting his sister's fans)?

In an effort to get America to vote for the above mission, Frankie offered to "follow" anyone who took a screenshot that they voted "yes" for the mission. His pull was clearly not strong enough to pass the mission, even though some people did do as he said. Once again, "overwhelming no."

In a complete character twist for the season, Frankie made a comment, that he perceived to be a funny joke, about rape. Not only was the comment not funny at all, but his comments went viral and created a lot of unhappy viewers and caused fans — and Victoria's parents — to demand an apology. Definitely not America's Favorite Player material.

Zach might have been a crazy Fruitloop Dingus in the house, but he was loved by America. And when you cross America, as Frankie did by backdooring his showmance Zach — the last thing America is going to do is vote for you to win money as their favorite player.

Joker's Big Brother Updates, a respected source for minute-by-minute updates of the happenings inside the Big Brother house, has a houseguest poll where users rate their favorite houseguests each day. In recent standings, Frankie and Christine are battling it out... for the least favorite player in the season. I kid you not, Devin is beating them. Devin. In the lead almost every single day is....

Another reason Frankie doesn't stand a chance to win America's Favorite Player is simply because this guy exists.

More like this
How To Follow 'Love Island's Casa Amor Contestants
By Sophie McEvoy
Fans React To Kelly Holmes’ “Extraordinary” ITV Documentary
By Sam Ramsden
Winter 'Love Island' Is Officially Coming Back & Twitter Has Thoughts
By Sam Ramsden
Yes, You Can Really Charter Below Deck Med’s New Superyacht, Home
By Brad Witter
Get Even More From Bustle — Sign Up For The Newsletter