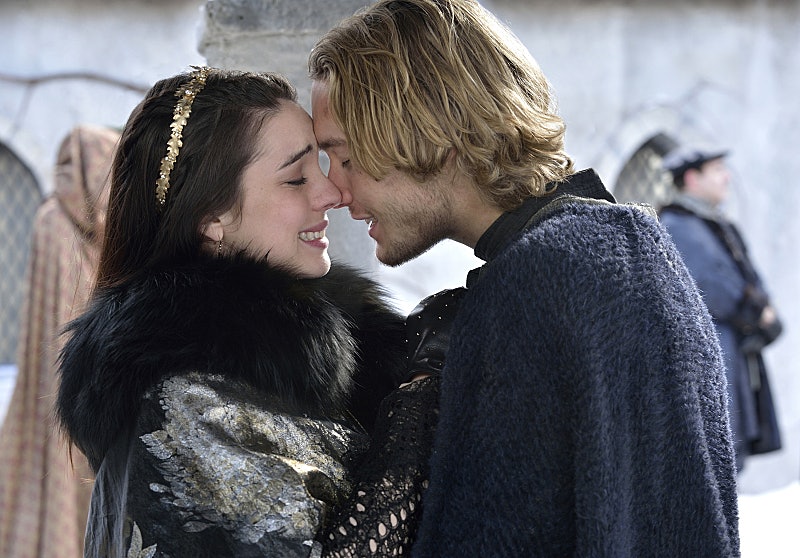 If you watched The CW's beautiful kind-of-hit, Reign in Season 1, then you now vampires aren't the only ambiguously aged (non)people who can get involved in mildly incestuous love triangles — Reign is on it. Plenty of 16th century bros turned against each other in battle for the affections of Mary Queen of Scots, France's best dressed teenage Scottish ex-pat. And if you didn't watch Season 1 of Reign, or even if you just want to do a re-watch to see if you can finally figure out what's going on with Bash's hairline, you might be wondering when Reign will make its royal way to the hamlet of Netflix; given The CW's Netflix track record, it should be soon enough. [UPDATE: According to a Netflix press release Reign will be available Oct. 2]

The CW is the definition of small-but-proud. Since its humble beginnings as The WB/UPN — long live Moesha — its shows have had a ferocious, but not necessarily large, fan base. But The CW actually loses money, per Vulture's Josef Adalian, because its small-but-proud ratings don't exactly pull in the advertising big bucks. When your linchpin is America's Next Top "Oh, is that still on?" Model, your shows probably aren't bringing in HBO on Sunday kind of numbers. According to the network president, Mark Pedowitz, The CW actually relies heavily on the revenue that popular shows like The Vampire Diaries, Supernatural, and Arrow bring in from Netflix buying the rights to each show's past seasons.

So, what of Reign, where the hearts stay breaking and the French court stays plotting? It's likely that Season 1 of the picturesque hit will be available for Netflix queueing under a blanket fort in a bed near you, but probably not as soon as you'd like. Netflix has been known to add shows with less than a week's notice, or sometimes, with no fanfare at all; in 2013, Season 1 of Arrow arrived on the streaming site at almost the exact same time as its second season premiere. This year, when it was announced that Season 2 of Arrow would hit Netflix on Sept. 14, it appeared as though fans might actually be able to binge it before Season 3 begins on Oct. 8. But then it was announced that the Sept. 14 date was just a miscommunication, and Oct. 8 had always been the intended Netflix release date.

So, that means there's the possibility that Season 1 of Reign, like Arrow, could hit Netflix the same day as its Season 2 premiere, Oct. 2. But it's more likely that it will be at least a little later in October, considering there has been no word of its release yet. Until then... let them wear Gucci dresses.

More like this
What’s New On Netflix: A Victoria Justice Rom-Com & The Return Of David Letterman
By Arya Roshanian
What’s New On Netflix: The Return Of 'Bling Empire' & A Rebel Wilson Comedy
By Arya Roshanian
8 LGBTQ+ TV Shows & Movies Like 'Heartstopper' To Watch On Netflix
By Alyssa Lapid
Oops! The 'Stranger Things' Monopoly Game Has Spoilers For Season 4
By Alyssa Lapid
Get Even More From Bustle — Sign Up For The Newsletter