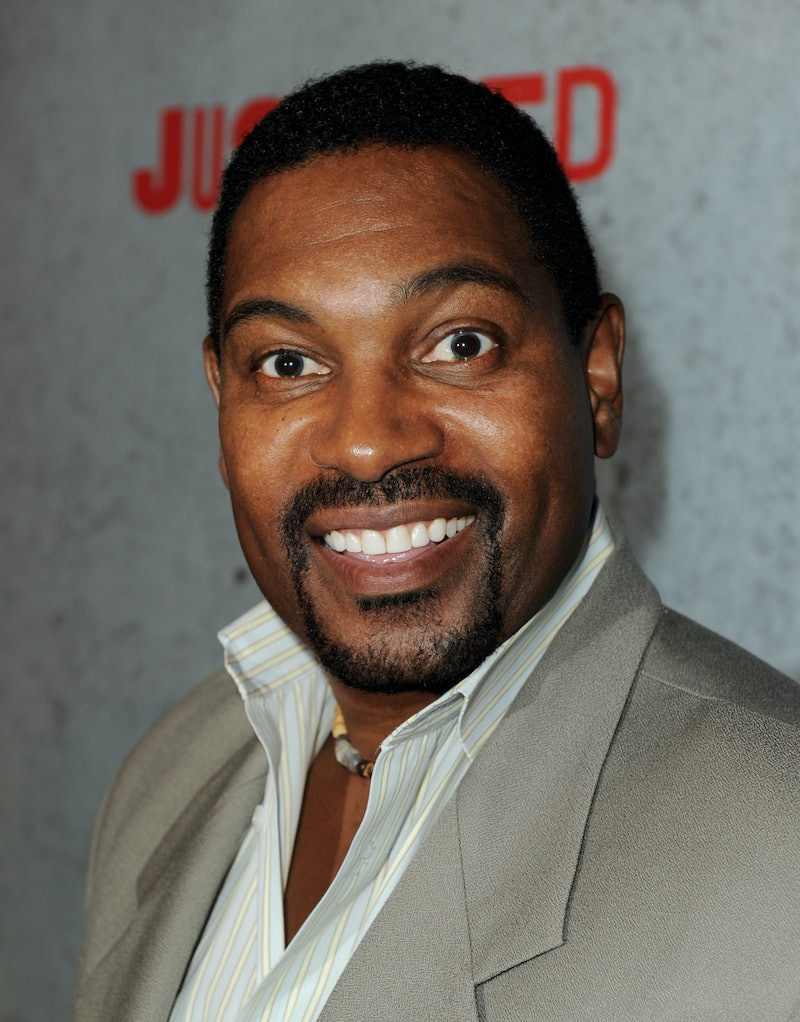 Call me a '90s kid, but I primarily know Mykelti Williamson as "Bubba" from Forrest Gump . So I was surprised when Deadline reported that he was cast in Season 3 of ABC's Nashville , but not rightfully so. You might know him more recently from 24 or Justfied. I need to catch up on my drama series, y'all! I'm sorry, there's only so many shows about tortured anti-heroes that I can take at a time. Anyway, Williamson will join this season as "Terry," a talented musician with a dark past roaming the streets of Nashville. How very mysterious. I have a sneaking suspicion that this casting spells trouble for the business side of Rayna Jaymes' life.

This season of Nashville will be doing some shifting, partially due to issues outside of their control, and a pickup truckload of new artists will be heading to town. Side-eyeing scene stealer Laura Benanti is dropping by, as well as Derick Hough and Alexa Vega. Rayna's own talented daughter Maddie might be on the rise as well. These are all very different artists who are all looking to get the same thing out of Nashville. I suspect that Williamson's role in this will be particularly juicy.

With a possible pregnancy ahead to affect Juliette's career in some way, and Will possibly looking at a public scandal, the hunt for new talent will be on in earnest at both Highway 65 and Edgehill Republic. The first clue? TVLine's spoiler photos showing Laura Benanti's character Sadie Stone making conversation with Jeff Fordham. Save her, Rayna! Scoop her up!

Will's video "confession" is bound to be released somehow. We know Jeff Fordham soaks up media attention like a reptile in sun rays, but if Will's record sales drop? He will get dropped. In my heart, I feel like Highway 65 would take on Will, if he's willing to forgive them for kicking him off Juliette's tour and any other bumps caused by the feuding record companies. I'm honestly not too concerned about Layla, even though that is a raw deal and I do feel bad for her. I think?

So, my theory is that Jeff Fordham will be looking for a new artist with a heartwarming tale to change the conversation about his record label. He'll encounter Terry and take him under his wing, promising some kind of redemption. I'm so sorry, Terry! I'm sure you're very talented.

Of course, I could have this all flip-flopped and it might be at least partially for the better. Will's record sales could soar as a result of him outing himself. Don't get me wrong — while that would be great news for country music and/or society, I doubt going from "in the closet" to "public gay figure" is an easy emotional transition to make. Especially for someone as stubborn as Will Lexington. It would also mean he's stuck with Jeff Fordham for good, leaving Rayna to need a new artist with a new story like Williamson's character instead. If Terry's discretions at all mirrors Deacon's, which Nashville writers love to do, that could cause some added tension for Rayna as well, no matter who she chooses in the premiere.

Neither the music business nor a television show can sustain on the same material. You need fresh takes and new blood. Season 2 brought us plenty of Nashville twists and I can't wait to see what's next.