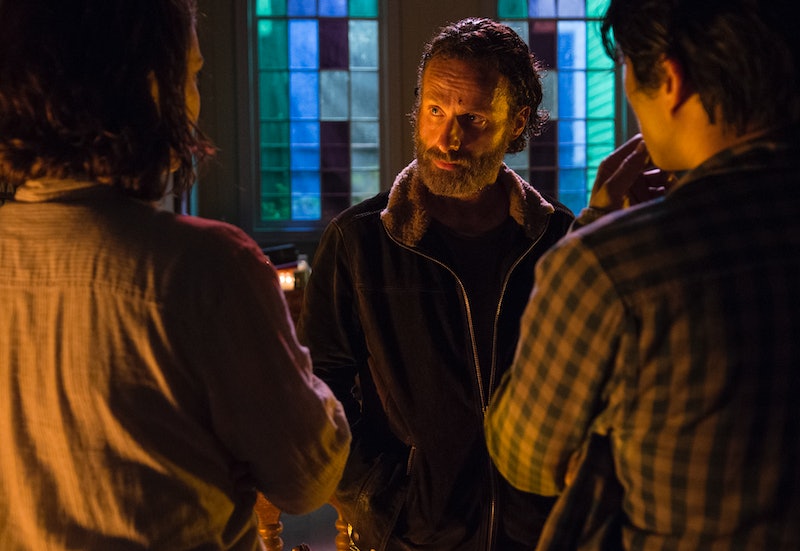 We're closing in on the mid-season finale of The Walking Dead and, honestly, it's going a lot slower than I expected. Terminus and Gareth are a thing of the past. The journey to Washington reached an abrupt standstill thanks to Eugene and Abraham. We found Beth Greene but she hasn't escaped, and Carol's addition to her storyline just makes everything seem slower still. We haven't seen Rick, Michonne, or Daryl for two whole episodes! Come on, AMC! Can this show get rolling already? Let's look again to the Nov. 23 episode which is called "Crossed." The official episode description for "Crossed," according to TV Guide, reads, "some members hold down the church while the others are on a rescue mission." Well, that's not very telling. So, let's focus on that title because we can learn a lot from that one little word. What could "Crossed" mean for The Walking Dead this season? I've sorted out a handful of options.

It's likely that the title has multiple meanings in the upcoming seventh episode, and "Crossed" is the theme that connects the two story lines. (Hey, like a cross! Would you look at that? The Walking Dead symbolism is easier to interpret than I thought!)

The cross, of course, could in some way relate to Father Gabriel and his church — especially if several characters will be holding it down. There are so many ways that the religious imagery associated with the cross could be integrated into The Walking Dead. Someone could have a crisis of faith. The role of Christianity in this new world is something the show hasn't touched on all that much and that's kind of odd, considering the AMC series takes place smack dab in the middle of the Bible Belt. Someone could make a sacrifice. Someone could be crucified. I would hope that isn't done literally, but you never know with this show.

The newest location, where Beth and Carol are currently being held, uses "cross" imagery as well. Their cars have white medical crosses on the backs of them. That's how Daryl is able to recognize and go after the vehicle that took Beth. In my morbid opinion, the crosses make them look like hearses. If the "rescue mission" takes place at the hospital, then these crosses are likely to come into play. Dawn Lerner is an intriguing new villain. I'm excited to see where the show takes her, and it looks like that might come to a head in this episode.

To cross someone, of course, means to betray them. On a show like The Walking Dead, there are many opportunities for betrayal. Numerous characters have already been betrayed this season. Eugene betrayed Abraham by claiming to know how to stop the Walker outbreak. Dr. Steven Edwards betrayed an old colleague, Beth, Noah, and could be persuaded to betray Officer Dawn Lerner. This could also be referring to Carol's betrayal from last season.

There's a cross right there in this tree. Could "Crossed" be referring to whatever marks Morgan is following and how these trees are crossed off? It's about time for Morgan to show up again after his surprise appearance in the season premiere. I bet that this has something to do with the episode title! In fact, the crosses on the tree bare a striking resemblance to the traffic sign for a railway crossing.

Why didn't I noticed this before? Perhaps this is foreshadowing the return of the Terminus Crew. They were based at a train station, the "end of the line." Where does that train take us? As far as we know, all of the Hunters are dead. Aren't they?

There are several expressions with the word "cross" in them to consider. You could be at a crossroads, both physically and emotionally. You could cross paths or cross a line with someone. Daryl Dixon has a crossbow and I would not want to cross him. You could be crossed off of a list, cross your fingers or cross your legs. Lovers can be star-crossed. You could just be cross. Who on The Walking Dead isn't at least a little bit cross?