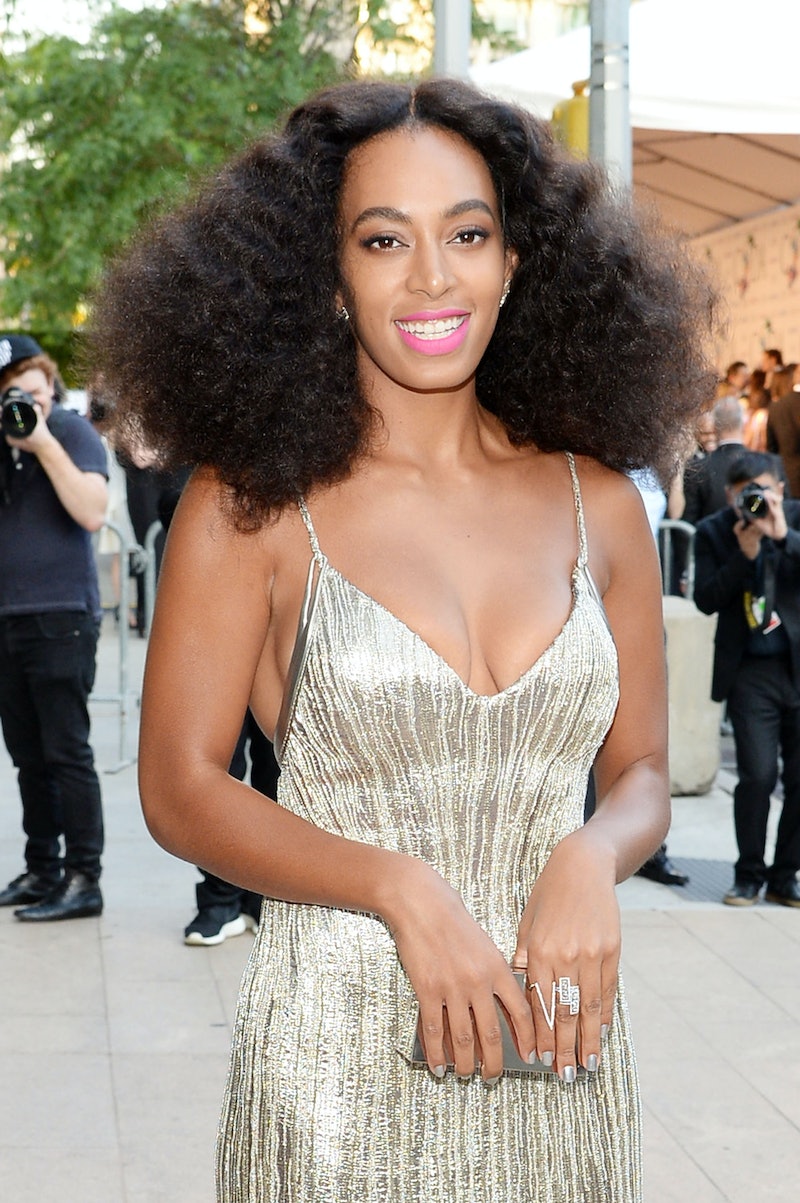 Didn't Alanis Morissette once sing: "It's like hiiiiives / On your wedding day"? Oh no, that's not the right lyric. I think Alanis actually sang about how rain can ironically ruin a wedding. Yet Solange Knowles got married over the weekend and nothing stopped her from making the most of her big day. Case in point? Solange got hives all over her face, but she doesn't even care and we shouldn't either. When talking about the mishap, she had the most perfect response. Posting to Instagram, Solange wrote:

Last but not least....:) Shout out to Benadryl yo, lol. NOTHING was gonna stop me from having my mother and son dance with Julez. My baby killed it and will forever remain my favorite dance parter of all time. My heart will forever smile reliving the feeling our lil happy feet together.

I don't know which part I enjoy more — the shoutout to Benadryl or to her son, Julez. The two stole the show with their adorable dance moves! (Sorry, Alan Ferguson. I guess being the groom just can't compete with being her son.) Joking aside, I appreciate that she handled the situation with such class. Instead of being as big a deal as TMZ made it seem, she didn't let anything stop her from making the most of her moment.

She also offered this explanation for the breakout:

Happy to hear she's got a sense of humor. This shows that as long as she had her loved ones there on her wedding day, that's all that matters. Here are some previous quotes that prove Solange always puts family first:

Growing up in Beyoncé's shadow must have been no easy feat, yet Solange didn't see it as a negative. She never sang an Ashlee Simpson-esque song about how rough it was. Instead, Solange speaks highly of her sister:

She was and is such a role model, but I think more so it was an insane learning process for me to have a big sister like that — to be able to see the good, the bad and everything in between that comes with fame and success, and to know what I was getting myself into.

OK, maybe this isn't a good thing to bring up in a happy post about her wedding. But when that whole elevator fiasco with Jay Z happened, she responded simply by saying:

What’s important is that my family and I are all good. What we had to say collectively was in the statement that we put out, and we all feel at peace with that.

Essentially, it doesn't matter what the public thinks, as long as her family is OK with each other.

While she's happily married now, it hasn't been an easy path for Solange. She was married by 17 and divorced by 19. Despite the hardships and how it made her grow up quickly, she told Harper's Bazaar in March that it really shifted her perspective. Despite things not working out, she still maintains a cordial relationship with her ex-husband so that they can properly care for their son.

We co-parent really well. I'm able to say, "I need to finish this album, can you step up and take care of the boy?"

Now that we went through all those seemingly bad times, let's focus on the good. This Instagram proves that to Solange, love and family trump all.