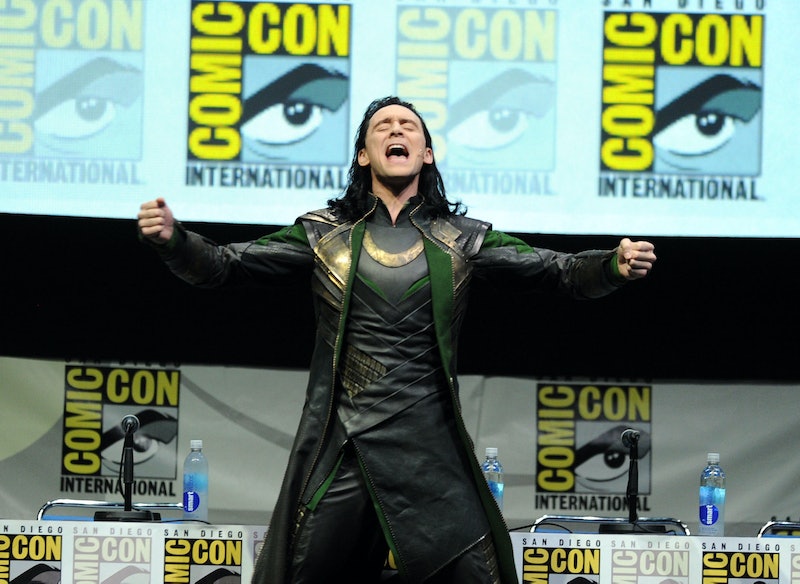 The Marvel Cinematic Universe has provided viewers with a bevy of memorable villains, including Ben Kingsley's Mandarin and Sebastian Stan's Winter Soldier... and yet somehow, none of them have managed to capture the hearts and minds of fans in the same way as Tom Hiddleston's Loki. First introduced in 2011's Thor, promoted to the MCU's first Big Bad in 2012's The Avengers, then killed off in 2013's Thor: The Dark World — and then revealed to still be alive a bit later in Thor: The Dark World, of course — Loki earned thousands of devotees with his charismatic brand of Chaotic Evil (to borrow a Dungeons & Dragons term). And now, despite official reports stating that Hiddleston would be spending the upcoming Avengers sequel on the bench, Idris Elba (who plays Heimdall in the Thor films) recently spilled the fact that he appears in one Age of Ultron scene alongside Hiddleston and Chris Hemsworth (Thor). Now all Loki needs to complete his domination of the MCU is a guest appearance on the films' small-screen sibling, but is it possible? Could Hiddleston ever be on Agents Of S.H.I.E.L.D.?

A surprise visit by Hiddleston on ABC's popular action show isn't as out of the question as it may seem. Even before the show ever premiered, the British actor was already expressing interest in guest starring on it. "It would be something that would depend upon script and story but yeah, of course," Hiddleston told CraveOnline in August 2013, before going on to describe how he'd chatted about the show with S.H.I.E.L.D. creator and Avengers director Joss Whedon when they saw each other at Comic-Con.

Throughout the show's first season, many fan theories persisted that Loki would be revealed as the true identity of the Clairvoyant (Season 1's Big Bad). Of course, that line of thinking didn't pan out — the Clairvoyant turned out to be the very non-telepathic John Garrett — but there are other ways the writers could get Hiddleston on their show.

Of all the MCU, Agents Of S.H.I.E.L.D. is most closely tied to the Captain America franchise, thanks to Hydra's takeover of the intelligence agency as depicted in The Winter Soldier. But the show also has close ties to Thor, thanks to multiple crossover events. Season 1, Episode 8, "The Well," was a tie-in with Thor: The Dark World , as the team cleaned up the aftermath of that film in Greenwich, England. Episode 15, "Yes Men," introduced Lorelei, an Asgardian sorceress who could control men with her voice. Thor's Lady Sif appeared in that episode to help the team take Lorelei down.

The show's Asgardian connections have taken a backseat during Season 2 in favor of the S.H.I.E.L.D./Hydra conflict. But bringing them up again (Lorelei escaping, Asgardian tech being discovered, etc.) would be the easiest way to bring Hiddleston onboard. Any appearance by Loki in this regard would likely be a mere Easter Egg thrown in to thrill fans. If the writers want to bring the character on in a more meaningful way, then they should consider this...

Have Loki & Ward team up

Think about it: Ward is kind of like S.H.I.E.L.D.'s Loki. He's charming, he's deceitful, and he possesses a distinct lack of scruples in the pursuit of his own nefarious agenda. And now that he's severed ties with both S.H.I.E.L.D. and Hydra, the former Agent needs a new camp to ally himself with. Who better than the god of mischief himself? And if the producers are worried that this potential plot line would require too much screen time from an expensive movie star, then have Ward's partner-in-crime remain a mysterious off-screen presence... until the Season 2 finale, of course, when Loki would reveal himself to the surprise of the characters and audience alike.

The alien city could actually be Asgard

Now, this one might be a bit of a stretch. The most popular fan theory is that the alien writing that Coulson was sketching on walls (which, of course, turned out to be a map) is pointing the team towards the Inhuman capital city of Attilan. But what if that theory is actually incorrect, and the blueprint will show the team a way to infiltrate Asgard itself? Perhaps, during the race to the "temple," Coulson & Co. will stumble through a portal and come out on Loki's home planet... and be forced to contend with the maniacal ruler himself.

It seems crazy now, but remember when Agent Coulson actually died in The Avengers after Loki stabbed him with his staff? Yeah, that happened. Of course, as we know, the S.H.I.E.L.D. writers magically resurrected Coulson so he could go on to be the star of S.H.I.E.L.D. But given that backstory, wouldn't it make sense that any appearance by Loki on the show would have to do with his connection to Coulson? I'm not sure how such a rematch would come about or what it would look like — I just hope it involves Coulson blasting the crap out of the cocky god with an alien gun again.

Huh? If Elizabeth Henstridge (who plays Agent Jemma Simmons) had her way, Hiddleston's visit to the show would involve Loki and Jemma swapping stories like a couple of pals. At last March's Paleyfest, the actress named Hiddleston as the MCU actor she'd most like to share a scene with, and envisioned a scene where they "have a cup of tea and chat about his dad issues." Somebody make this happen, stat!