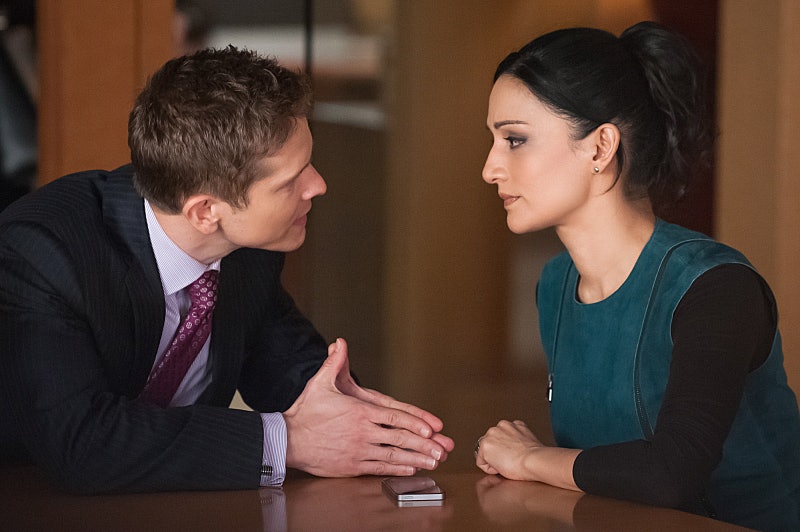 I think we can all agree that CBS's The Good Wife is one of the best dramas on television (if not the best), so it's funny to realize how long it took creators Michelle & Robert King to capitalize on two of their main characters: Kalinda Sharma and Cary Agos. Kalinda, especially, was promising right from the start; with her penchant for leather, thigh-high boots, and baseball bats — not to mention her unpredictable sexual proclivities — the firm's investigator instantly became a fan favorite... and then didn't get any storylines of her own. (Well, until that whole Season 4 abusive husband debacle which we've all collectively agreed to pretend never happened.) This lack of development helped cushion the blow of the recent news that Archie Panjabi will be departing the show at the end of this season, leading to sadly ambivalent headlines like "Kalinda is leaving The Good Wife — but the show lost her years ago."

Cary, by virtue of being a cisgendered white guy, was never as inherently interesting as Kalinda. But portrayer Matt Czuchry played Cary with a subtle sensitivity that belied his smarmy exterior, and it was frustrating to see him shunted to the sidelines after his Season 1 competition with Alicia came to an end. His character managed to grab a bit more of the spotlight when Cary and Alicia agreed to start their own firm together, but it wasn't until Season 6 that both he and Kalinda really came into their own, thanks to the Lemond Bishop plot. It's ironic, then, that Bishop will likely prove to be both of their undoings.

The state's case against Bishop has made Kalinda and Cary the sole focus of the season (aside from Alicia and her run for State's Attorney, natch). The fact that Cary is facing legal trouble just as his relationship with Kalinda was starting to blossom into something real only makes it that much more painful. The two lovebirds may not have proved to be right for each other in the long-run, but now we'll never know. Because no matter what happens with Cary's case, no matter how he feels about Kalinda's infidelities, they will never have a happy ending. This is some star-crossed lover crap straight out of Romeo And Juliet, you guys!

Panjabi's impending departure puts a bit of a damper on any relationship plans the couple might have had. Unless Czuchry leaves the show with her and the writers have Kalinda and Cary run away to Barcelona together, this 'ship is sinking. I already considered a few ways the Kings could choose to write Kalinda out of their show, but there's one option I didn't consider at the time that is starting to seem more and more likely: Kalinda will kill Lemond Bishop.

When I imagined Kalinda leaving Florrick/Agos by going on the run from the law, it was because the body of her husband had been found, after she ambiguously "got rid of him" in Season 4. But what if she goes on the run because she murdered an infamous drug lord to save her lover from a life-destroyed prison sentence? It seems almost inevitable that Season 6 will end in death — the stakes have been higher than ever this season and almost every episode has a sense of mortal danger hanging over it like a dark cloud — but violently killing Kalinda would be too similar to the way the Kings wrote out Josh Charles' Will Gardner last season.

Kalinda has always been a badass, and she recently proved she's not even afraid of the imposing Bishop when she threatened the kingpin's young son in his own kitchen. And as much as she cares for Cary, she's obviously not ready to commit to a monogamous relationship. Killing Bishop would solve all these birds with one stone: she would take down a dangerous drug dealer, she would save her lover's career, and she would force herself to move on from a situation she was starting to feel trapped in. Basically, it would allow her a noble "out" from her relationship with Cary, and it would provide her with a memorable and heroic exit worthy of such a beloved character.