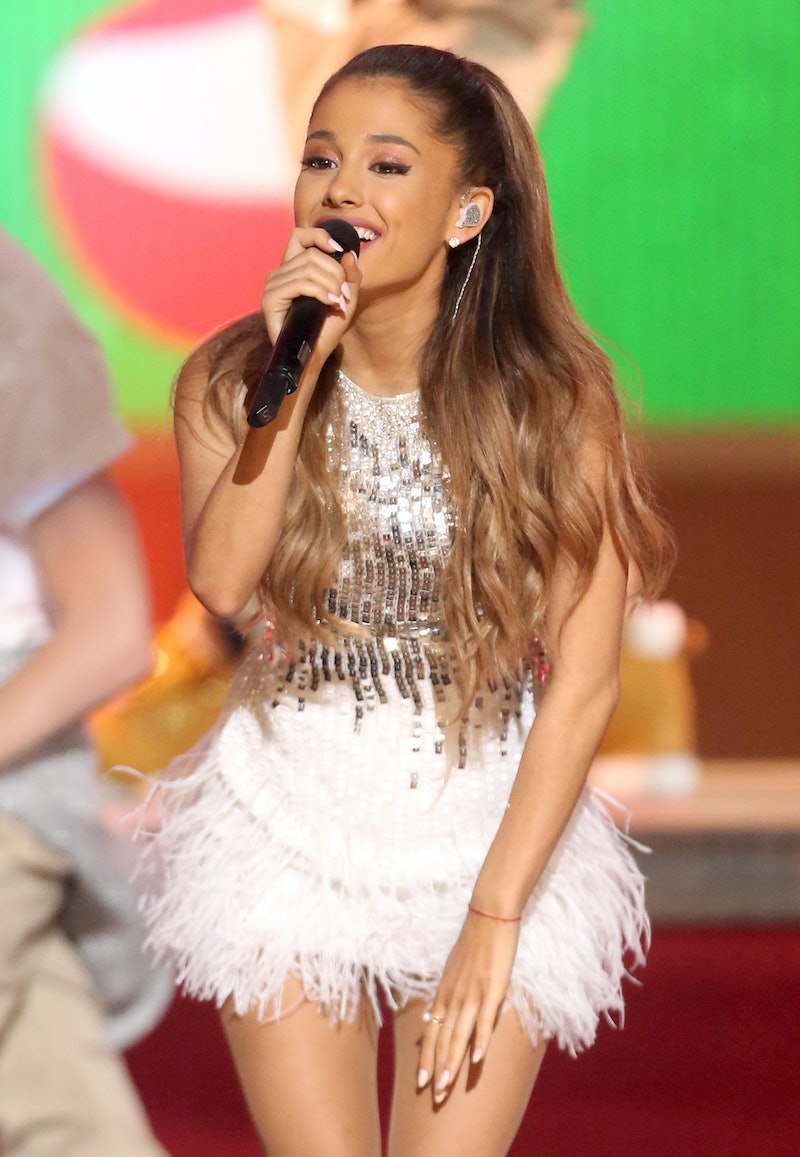 The best way to get in the holiday spirit? Christmas music, of course. My personal favorite is Mariah Carey's "All I Want For Christmas Is You." (Isn't it everyone's?) But that ballad may have a replacement, because Ariana Grande's "Santa Tell Me" is just so catchy! It totally makes sense that Grande makes amazing Christmas songs, since she's considered a Mini Mariah. After releasing the holiday track a few weeks ago, Ariana Grande debuted the "Santa Tell Me" music video over the weekend, complete with two minutes of outtake footage. Essentially, the video is like one giant Old Navy commercial. I mean that in the best possible way, but with all those festive outfits, I was waiting for a "pajamas on sale for the whole family!" banner to pop up across the screen.

Here's what happens: It begins with a wriggling bed. My first guess was that it'd be Ari and her five dogs under the covers. Although I was wrong, I wasn't too far off... Out pops Grande wearing a cat hat. (Typical!) If I had to classify the species, it seems looks like a leopard-bear combo, but who knows. What I do know? She makes those furry animal hats with mitten-paws attached (usually sold in mall kiosks) actually seem cool. Of course, all her friends have matching ones.

The rest of the video features Grande dancing around a festive mansion with all her friends. It's like a grown-up (but not too grown-up) version of Mary-Kate and Ashley's holiday party from their "You're Invited" series. When she's not in PJs, she's rocking a Christmas sweater that says "Happy Elfin' Holiday" (I see what you did there) and reindeer antlers, because the girl loves her animal ears. Also unsurprising? She's got her signature Ariana Gran-do — aka her half-up, half-down hairdo. It's nice to see some things never change!

After you've watched the video above, here are my five main observations from "Santa Tell Me," including a few things you may have missed.

Ariana has a thing for bows

Ever since she was little, Grande loves sticking bows on her butt. Why? I don't really know. This traces back to a throwback photo she posted on Insta last month. Then in the music video, she does this multiple times. Is it because it resembles a tail and goes with the animal ears?

Really though, I don't understand.

Onesies are the best kind of pajamas

Seriously, how adorable are her snowflake jammies? Instead of rocking flannels like us normal folks, she has an awesome onesie. Even everyone in the video seems to have found the perfect pair of pajamas.

Her pup makes a cameo

This isn't the first time she's featured her pets in her video. Toulouse makes a few appearances, including walking around in the outtakes.

Popcorn is her on-set snack

While candy canes would've been more festive, I appreciate that they included clips of her snacking on popcorn. Because duh, jumping around in pajamas is exhausting and makes you hungry. I wish the bag wasn't blurry though. Mostly because I want to know what brand and flavor — white cheddar? Butter? Kettle corn?

Now excuse me while I go make some popcorn, and replay the video for the 100th time!