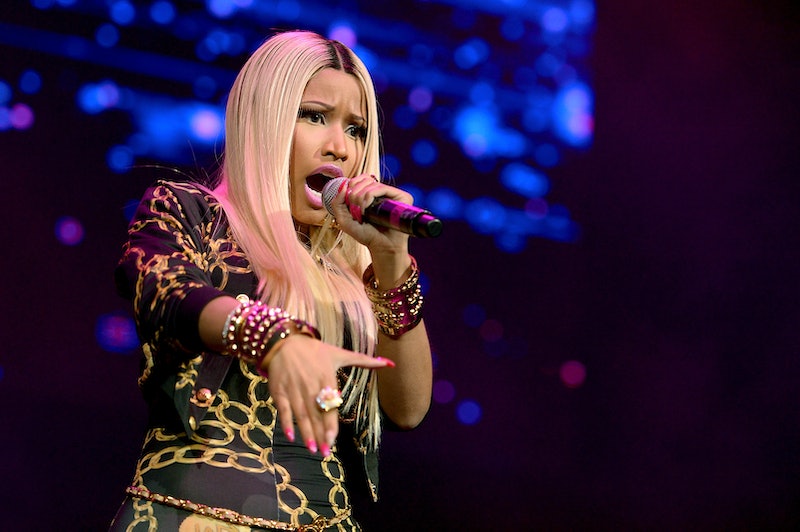 While there were some truly disappointing moments in 2014 for feminism, most recently all the victim-blaming that has befallen the women accusing Bill Cosby of sexual assault, there were also bright moments of strength from several actresses, singers, and other women in entertainment that make us optimistic for the year to come. In the landscape of Hollywood, even as more and more women make strides in film, television, and music, the depth of inequality between male and female stars in Hollywood was never forgotten.

When the Sony hack-splosion happened just a few weeks ago, we go the disappointing yet somehow unsurprising news that Amy Adams and Jennifer Lawrence were paid less than their male costars in American Hustle. Shonda Rhimes was called an "angry black woman" in a New York Times review. The feminism of Beyonce was debated and dissected until the cows came home.

Despite the exhausting, latent misogyny that still rears its ugly dude-centric head in the entertainment world, we were also impressed with several strong moments by strong women who broke barriers and stopped taking crap in 2014. These 10 moments make us hopeful that 2015 will only bring more.

Lupita Nyong'o at the 2014 Academy Awards

The luminescent Lupita Nyong'o won the Academy Award for Best Supporting Role in 12 Years a Slave, her debut performance. She gave an incredibly inspiring speech about how all children deserve to realize their dreams, white or not.

At the 2014 Time to THRIVE conference in Las Vegas, a pro-LGBT gathering, Page gave a speech revealing that she was gay and that she was "tired of hiding" her identity. She also made it known that she wanted to fight that kind of pressure in Hollywood to stay silent about sexuality.

Emma Watson at the United Nations

At only 24 years old, the Harry Potter actress officially crossed over from Hollywood to the humanitarian issues of global politics. She became a United Nations Goodwill Ambassador for Women, and at the UN Headquarters in September she revealed her HeForShe campaign, which she said is "a solidarity movement for gender equality that brings together one half of humanity in support of the other of humanity, for the entirety of humanity."

Nicki Minaj Kills It In General

It was a banner year for Nicki Minaj, releasing The Pinkprint right at year's end and blowing our collective minds at the end of the summer with "Anaconda," with a music video that is now the most played video on YouTube. She became a pillar of an extremely hardworking talent in the rap game which is particularly hard for women to thrive in, promoted body acceptance, and talked candidly about her abortion. She also teamed up with Beyonce more than once for the ultimate convergence of domination by women of color.

What more do I need to say? This might be the most iconic image of the year. Of course, Queen Bey continually impressed us this year, but this was The Moment that really made it clear she is a superhuman put on earth to bless us with her strength.

Laverne Cox on the Cover of Time

The actress from Orange is the New Black has been a huge advocate for transgender rights, and her work in making visible the transgender experience was recognized when Time featured her on their cover—she is the first transgender woman to ever make the cover, and she deserves it for being a pillar of grace and strength and a role model to young transgender kids that might feel helpless.

When J. Law's private nude photos (and those of many other actresses) were leaked, she did not respond with apology for taking nude photos but rather with righteous anger, calling for the ban of illegally obtained images. She held her head up even when her character was being assassinated for taking nude photos in the first place — she just didn't stand for that kind of slut-shaming.

My love for Daily Show correspondent Jessica Williams knows no bounds. Even though the 25-year-old has been on the show since 2012, this year she really showed just how incredible her voice and her segments are. Besides being able to tell Jon Stewart to stay in his lane when it comes to racial discussion, she also did several amazing segments about street harassment and rape culture at universities.

Besides dominating mercilessly the world of television this year with her block of Grey's Anatomy, Scandal, and How to Get Away With Murder — all of which are some of the most racially diverse and open-minded shows on primetime — Rhimes also slam-dunked her response to the horrendously offensive New York Times review of HTGAWM by Alessandra Stanley. She used it as a teaching moment about the continual and very present racism in entertainment and journalism.

So this one isn't from a woman, but it's a good reminder that there are some good male allies out there. In perhaps the most beauitfully simple and universal explanation of feminism possible, Ansari talked to David Letterman about being a feminist by using a Beyonce metaphor. Sometimes comedy is the best way to make people realize that NOT believe in equal rights for men and women is absurd.

More like this
Harry Styles Called For "Backlash" In Powerful Statement On Abortion Rights
By El Hunt
Sandra Bullock, Girlboss Extraordinaire
By Matt Harkins & Viviana Olen
Spice Girls’ Net Worth: The Richest Member Is Wealthier Than The Rest Combined
By Hugh McIntyre
The Very Best Quotes From Dr. Taylor Swift’s NYU Graduation Speech
By Grace Wehniainen
Get Even More From Bustle — Sign Up For The Newsletter