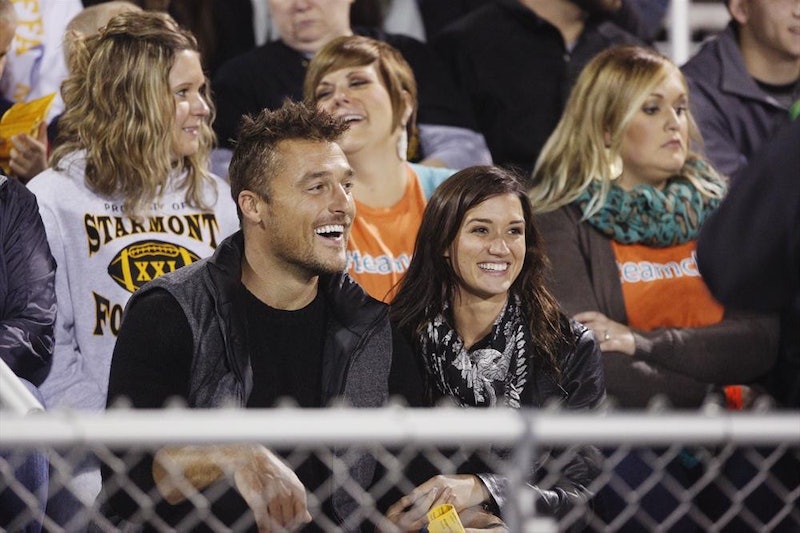 Does anyone else feel like Chris Soules' season of The Bachelor is way shorter than most seasons normally are? Chris Soules is already at hometown dates and we only have a few weeks left before he crowns his Princess Farming, but I feel like this season just started. Even though the season is 10 episodes like just like everyone else’s, all the drama has made the episodes fly by. It seems like yesterday that Tara drank too much before the first rose ceremony and Ashley S. confused a pomegranate for an onion. Even though I was excited for the two-day Bachelor special, it just means we have one less week with Mr. Soules.

Just when we thought things couldn't get any crazier, the remaining ladies went to Arlington, Iowa and it brought out some real feelings about what life was going to be like living on the farm. Britt apparently wasn’t really into the town, but told Chris she was because why would you tell him how much you hate it if you're trying to give this relationship a real shot? Things got a bit out of hand and (spoiler alert) it's looking like she might not make it through Monday's rose ceremony. Monday, we will see Chris head to four different hometowns and then he'll whittle it down to our top three, which means these folks are finally headed to the fantasy suite. See what I mean? We are already almost to the fantasy suite! This does feel fast.

Here are the six moments that are making this season fly by:

This was probably the most dramatic part of the entire season thus far, when Ashley I. tells Chris about Kelsey’s issues with the other women, which is a cardinal sin on The Bachelor. You’re not supposed to talk badly about other women in the house to the man you're all trying date! But Chris wasn't much better in this situation, immediately ratting Ashley I. out to Kelsey and sending everything out of control. After all that, he sent home both Kelsey and Ashley and peaced out in the only helicopter while they hung out, teary eyed, in the badlands at dusk.

Jillian finally got her chance with Chris in San Francisco, but unfortunately used her time to talk… a lot — so much so that Chris could see immediately that there was no connection. Needless to say Chris wasn’t impressed even though she’s a total babe with a great job and he sent her packing while they were still on the date… awkward.

Two times this season, women tried to come back for a second chance. It worked the first time, but the girls were not having Jordan’s return in New Mexico, which turned into more drama when Ashley I. became kind of a bully during the episode. However, that was the moment I truly fell in love with Whitney and her maturity in these unthinkable situations.

After onion-gate, Chris took the ladies to shoot zombies with paintballs. Ashley S. took Chris aside for a walk after the action was over and kept talking about the “Mesa Verde dome” and kept smelling his leather jacket. No one really knows what was happening there, but Chris did call her “straight up crazy” on Jimmy Kimmel after the fact — not cool, Chris.

Everyone was upset with Kelsey when she fell over and had a panic attack in Santa Fe. Whether or not she actually had one is obviously a moot point now, but at the time it was so dramatic that we just couldn't wait till the next week to see how it all played out.

I did not expect a breakdown like that from Britt, who appeared to be a serious frontrunner poised to win the whole thing. Chris was obviously smitten with Britt from the start and his affections were super obvious the entire season and not just to us, but to the other women too. However, on Sunday night, Britt seemed to betray that she isn't ready for the farming lifestyle and that she could possibly be a bit selfish — however right Britt might be about the strange set-up of The Bachelor , it wasn't cool to complain about Chris giving Kaitlyn a rose in front of both Kaitlyn and Carly.