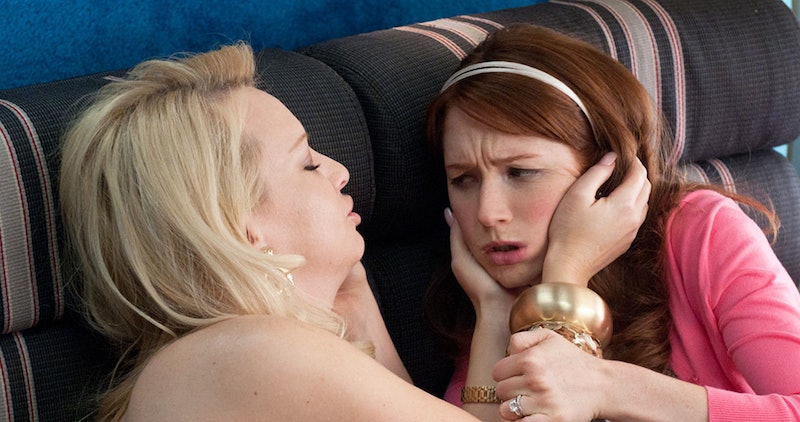 Most of us love to travel, but when we say we love to "travel" we usually mean that we like to be in cool new places, not actually endure the struggle of airports, trains, cabs, planes, buses, and other modes of often stressful transportation. And when you're afraid of flying, that stress magnifies tenfold. Maybe some people like flying, but I certainly am not one of them, and I'd be hard pressed to find a friend who does. Unless they're flying private, which, let's face it, most of us are sadly not.

As a child, I loved airplanes. In fact, my first long-distance trip (at like, two years old) involved a layover and a bumpy island-hopper, which left me convinced that it wasn't really an airplane ride if it wasn't tiny and turbulent. Maybe I was a weirdo or maybe I was a daredevil X-Games star in the making. Either way, this affinity for bouncing around thousands of feet above solid ground with absolutely no control in a confined space did not last. By the time I started flying alone as a teenager, I was no longer down with air travel. The older version of myself was prone to irrational paranoia and mild claustrophobia, and flying became a dreaded means to an end. However, years of necessity, bicoastal living, and a true love of exploring foreign locales has allowed me to get past my low-grade fears and learn to deal. I don't know if I'd say I enjoy it, but I've definitely locked down some coping techniques.

As spring break approaches for many, flying with friends adds a whole new element to the experience... and frequently throws a wrench in your solo-flying routine. Some of your friends may not be quite as worldly and jaded as you when it comes to airplanes, but do not fret — here are nine pieces of wisdom you can impart on your buddies to ease the process.

1. Encourage them to come prepared

Double checking that you've packed everything you need, making sure carry-ons are free of contraband, bagging up small liquids in advance, and having IDs and boarding passes ready makes the airport grind run much, much smoother. Encourage your friends to be totally on it so you don't encounter stressful holdups and avoidable glitches.

Which of your friends is more comfortable at the window? Will some low key Instagram-ing of the clouds take their mind off the aircraft? Or is your nervous buddy more of an aisle seat-er? Figure this stuff out in advance so that everyone is as comfortable as possible.

One of the major perks of becoming legal is being able to drink at airports and/or on airplanes. Even if you aren't afraid of flying, the travel process can be stressful, and nobody will judge if you go for a cocktail to decompress a bit. My personal airplane go-to combo is a cheese plate and Bloody Mary (shoutout to the Virgin America "English" Mary that uses gin instead of vodka — you never let me down). Order your fretful friend his or her drink of choice, and watch the nerves vanish.

4. Have an arsenal of entertainment

A lot of airlines these days actually have quite the array of entertainment options to choose from right at your seat. From On Demand content and new releases to satellite TV, audio playlists, and games, the plane might have you covered. If not, come with your friend's favorite movie loaded up on your laptop, or pick up a copy of their guilty pleasure magazine.

Airplanes are the optimum time for terrible reality show marathons (TBH this is how I got embarrassingly hooked on Vanderpump Rules ) and trashy celeb gossip magazines. Whatever you do, avoid stressful thrillers or disaster movies. This is not the time to get your pal into Lost.

I have developed a completely rational, obvious, foolproof theory. If there is a baby or small child on the plane, you are SAFE. Multiple cute kids? EXTRA safe. The universe will get these precious children to their destination, and by proxy you are golden. There are no holes in this logic, and your friends will surely agree.

6. Put the homework and the work-work DOWN

In the middle or writing my thesis, I was flying across the country for something-or-other. I told my advisor my plans to accomplish all of these productive things on the plane ride and she told me to stop right there. Real world problems do not exist in the sky. Zooming around thousands of feet above Earth, you don't have to worry about things like homework or project proposals. Splurge on the large pack of gummy bears, sit back, and leave it for later. What if you were to fall out of the sky having wasted your last hours in Excel? Don't share this last thought with your friend.

Just like at summer camp or in AP Bio, it is crucial that you find frivolous distraction in the form of a cute stranger. Maybe they aren't even your IRL type, but that doesn't matter on an airplane. Help your friend pick an object of very temporary, from-afar affection to keep their mind off of flying. Make up a backstory for your chosen one or even message them if you're brave. High school is alive and well at 35,000 feet.

8. Keep the focus on the future

The flight is just a small inconvenience in the grand scheme of your sure-to-be-epic vacation. Remind your friend of all the amazing things you have planned to keep them focused on the destination. They can do this — and you are their in-flight life coach.

Statistically, you're safer on an airplane than most of the time you spend on the ground. In 2013, only 0.24 out of every 1 million flights had an accident, and 3 billion people flew safely on over 36.4 million flights. Reassure your friend that these guys know what they're doing, and planes are actually one of the safest modes of transportation. The car you took to the airport was way more dangerous, and they were probably totally chill then.

Above all, do not let the woes of flying get in the way of your trip and your friendships. Support each other, you'll get through it, and it'll be the best spring break ever.