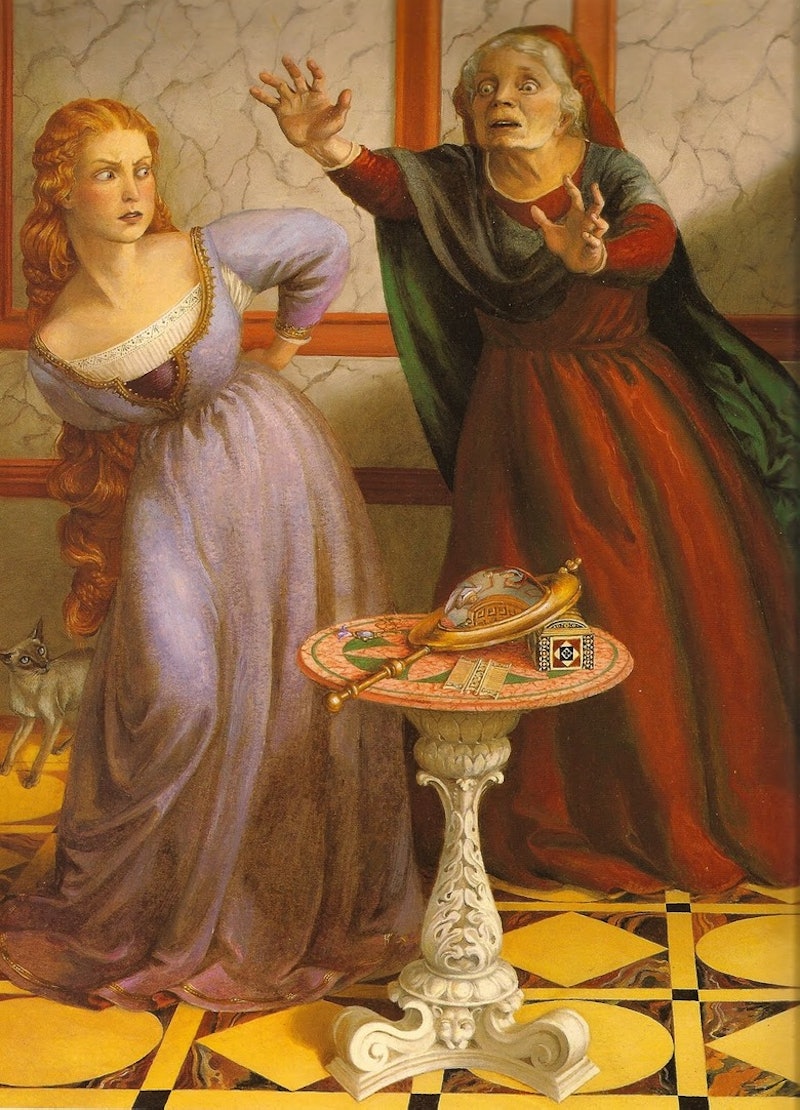 We all know the basics of Rapunzel: girl with long hair imprisoned by an evil witch, prince comes along, climbs up hair, rescues said trapped princess. (Why Rapunzel didn't just cut off her hair, knot it to something and climb down it herself is testimony to the power of Stockholm Syndrome.) But, while the original story seems to draw inspiration from several tales of women trapped in isolated places in various cultures, the Grimm Brothers' version of Rapunzel is the definitive tale — and it's one hell of a bizarre ride.

One of the reasons Disney may have taken so long to translate it into film — (in the 2010 film Tangled , which gives the heroine's hair magical powers, presumably to give the villain of the piece a more tangible reason for locking her up than just "I'm an earlier version of Mr. Grey") — is that the source text is actually pretty adult. You'd think that wouldn't stop Disney, considering they took the originals of Cinderella (which involves foot mutilation) and The Little Mermaid (which is horrible from start to finish) and made them into child-friendly classics; but there are aspects of Rapunzel that have made it hard to sanitize for child viewers.

In fact, the 1812 story was so hardcore that the Grimms released a second version, in 1857, that was more toned down — but the original survives, and it's got some serious problems. Enjoy the seven most shocking aspects of it.

The original story is driven by the frantic cravings of Rapunzel's mother, who sees a herb in the beautiful garden next to her own while pregnant, and starts craving it so madly that she demands that she must either eat it or die.

Women's bodies and pregnancy, for the Grimms, were such powerful, dangerous things that you had to do all kinds of worrying stuff to keep them happy — like, in Rapunzel's dad's case, climbing over a witch's garden wall and stealing herbs. Cravings weren't the body trying to get more nutrients; they were mothers being irrational and causing mega magical trouble.

2. Rapunzel is given to the witch because her parents stole plants.

The Grimms are pretty clear that it's Rapunzel's mother's irrational body we should blame for Rapunzel's fate, and not, say, a clearly manipulative gardener or some very strange legal shenanigans. When the witch who owns the garden next door discovers Rapunzel's dad rooting in her hedgerows, she doesn't a) call the night watch or b) throw a flower pot at his head. She lets him take as much herb as he likes, on the condition that he gives her his child when it's born.

Let's just sit with that one for a second: The witch gets a kid because her parents stole some of her veggie garden. And that's meant to be her being nice; it's only after the father pleads and she feels merciful that she strikes that deal.

"Rapunzel" is the name of the light purple flower of the herb rampion, which is what her mother was supposed to be craving; so the poor baby was literally named after the source of her misfortune.

3. The prince and Rapunzel totally have a booty call arrangement.

Rapunzel being imprisoned as a child and raised by the witch in a doorless tower is pretty well-known: the famous long hair, incidentally, is described as "twenty ells long," which equates to thirty feet. The prince, however, doesn't do what anybody else would do, which is try to at least talk to the girl several stories up in the air; instead, he pretends to be the witch and climbs up to her unannounced. Rude.

The Grimm Brothers do at least note that Rapunzel was rightly terrified, because she'd never seen a man before in her life — at least until he sweet-talks her a bit. The two of them are also not particularly bright; neither of them thinks of cutting off the hair and using it to help Rapunzel climb down. They just keep meeting up at night — which, it turns out, means exactly what you think it means.

In the original story, which the Grimms altered possibly for reasons of propriety, the witch discovers that her prize has been getting some because Rapunzel innocently asks why her waist band is getting bigger. That's right; she and the prince have been having premarital sex, but he didn't think to explain to his innocent, tower-dwelling girlfriend that getting pregnant was a thing. See what I mean about having no manners?

The witch, however, is not an idiot, and knows exactly what this means. (In the later version, Rapunzel is simply a bit clueless, and asks why the witch weighs so much more than the prince who's also been climbing her hair. More foot in mouth than bun in oven.)

The best bit is that she calls Rapunzel "godless" — because it's more unacceptable to have a kid out of wedlock than it is to lock a child in a tower for her whole life.

5. Rapunzel is forced to give birth in the desert.

Poor Rapunzel really gets a poor hand. After being impregnated by a well-meaning dude who forgot to explain what a womb was, the witch throws her out and leaves her to live in the desert. There, she has to give birth to twins, alone, despite nobody telling her what birth is or how everything is supposed to work. That, no matter which way you slice it, sucks.

6. The prince tries to commit suicide, but gets blinded instead.

The Grimm Brothers give the prince a pretty terrible punishment for unleashing his sword outside the confines of marriage, too. When he climbs up the braid (which, of course, the witch cut off Rapunzel before sending her to give birth in some sand dunes), the witch taunts him, and he leaps from the tower in a clear act of attempted suicide.

However, because nobody's allowed to get off that easily in a Grimm tale, he survives — but has his eyes torn out by the thorns at the bottom of the tower. So now he's blind and hideously depressed, and wanders the forests and deserts moaning the loss of his beloved (whom, in the later tale, the Grimms altered to "his wife", so that they were at least suitably betrothed before indulging in tower nookie).

7. The "happy" ending comes because Rapunzel's non-virgin tears are magic.

Inevitably, Rapunzel and her twins in the desert come across her blinded paramour, but only after several years. When they find each other, Rapunzel weeps on his face, and he's miraculously cured of his blindness, because even ruined desert-dwelling harlots can have a few magical powers up their sleeves.

The prince takes his girl and his babies home to his kingdom, where they'd sensibly given him up for dead, and they live happily ever after, presumably after fielding a few awkward questions about the age of those small kids they brought along.